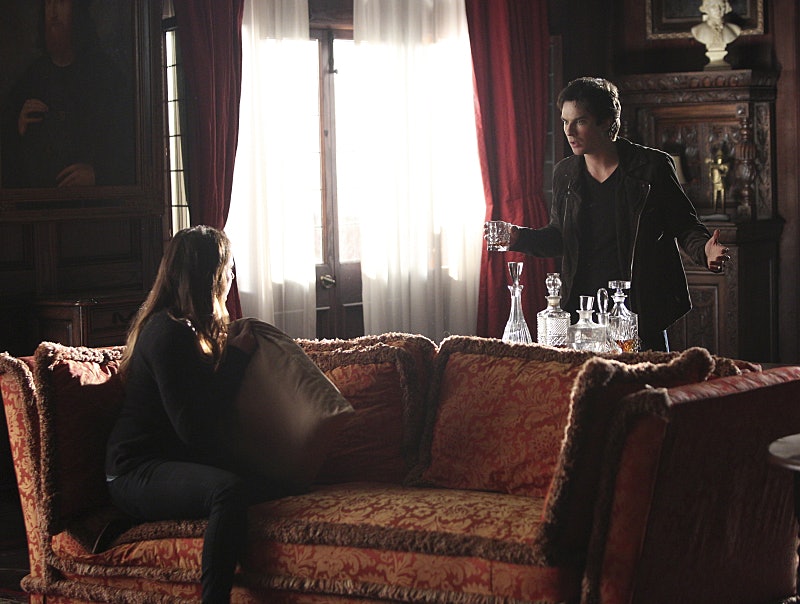 When is The Vampire Diaries going to make this official and stop making me have to work to keep my expectations low? Slowly but surely, since Damon returned from 1994 on TVD, the series has been playing the "will they, won't they" game about Delena getting back together. There was Elena's new romance that ultimately failed because she's destined to be with Damon, there was Damon's short-lived sacrifice, and there seemed to be a chance that Elena might die trying to get her memories back. But, on Thursday night's, "I Alone," TVD hinted that Delena can happen without Elena's memories. To which, I obviously say, "Of course they can!" but what exactly does that mean?

In typical Delena fashion, this revelation had to come after Damon and Elena had a semi-argument and discussion about Damon's morals. Because, as usual, Damon did something questionable to keep Elena by his side — seriously, this was the ultimate "Typical Damon" moment. On Thursday night, Damon compelled Alaric to steal Jo's ascendant so he and Elena could save Bonnie. Thus making Damon a hero and forcing Elena to fall in love with him all over again or at least give him a chance to show her how great they could be together. And it all seemed to be going according to plan until Elena learned how Damon got them there and decided to act all self-righteous, as if she wouldn't have done ANYTHING to save Bonnie. (Sometimes Elena drives me crazy and this was one of those moments.)

But, after their argument, Elena apologized for wiping her memories. For the first time since Damon returned, Elena actually showed remorse for truly believing that he wouldn't come back to her, which is exactly what Delena needed. At this point, Damon's onto Plan B, which is to get Elena to fall in love with him all over again and on Thursday night, the pair seemed to agree that maybe they can make new memories that are even better than their old ones. I mean, this is Delena, they're obviously destined to be together, so making new, romantic memories shouldn't be that hard.

They did fail to save Bonnie and now they have Kai and moody-Jeremy to deal with, but another episode of TVD Season 6 has gone by, and again the show is teasing the ultimate Delena reunion. As soon as all of this crazy Kai nonsense is over, someone had better get a witch over here ASAP to reverse Elena's compulsion so we can get back to moments like this:

That's my Christmas wish, Julie Plec. Don't let me down.