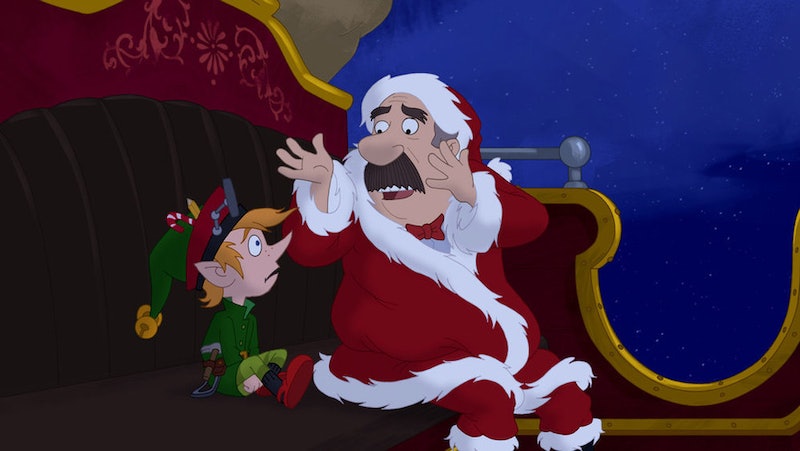 Holiday movie season is in full swing! Between getting reruns of classic movies (who's ready for the 24-hour Christmas Story?) and completely original films (like Lifetime's En Vogue Christmas... randomly enough) it's time for the new adaptations of great family-friendly books. The next on the list is Friday night's film adaptation of How Murray Saved Christmas on NBC, an adorable, funny tale about a cantankerous deli owner, Murray, who is forced to fill in for Santa Claus one Christmas night. And surprisingly he does a great job. The cast for the NBC animated comedy is a pretty great one: It includes Jerry Stiller as Murray, Sean Hayes as Edison Elf, Jason Alexander as Doc Holiday, and many more. But of course for holiday TV movies like this one, there is almost always a narrator, and this film has chosen the perfect faceless voice for its journey. So who is the How Murray Saved Christmas narrator? His name is Dennis Haysbert, and while you may not exactly recognize the name, you'll definitely recognize the voice.

Haysbert has popped up in a several dozen movies and TV shows you've watched for years now and has made memorable impressions in all including Heat, Waiting To Exhale, Love & Basketball, Jarhead, The Unit, Growing Pains, Trophy Wife, and The Boondocks just to name a select few. But Haysbert is also big in the voice acting world as he's popped up in shows and films like the animated Superman series, Wreck-It Ralph, Kung Fu Panda 2 and the Justice League series. He's even done some theatre work with shows like David Mamet's Race under his belt. But there are a select few shows and films you'll know him and voice from in particular...

After playing roles in both Major League movies (he played outfield power-hitter Pedro Cerrano in the Charlie Sheen films), Haysbert made waves in the Oscar-nominated film Far From Heaven opposite Julianne Moore and Dennis Quaid. The film, which was set in the 1950s, follows a housewife who discovers her husband is gay. While dealing with the crumbling of her household, she meets Haysbert's Raymond with whom she strikes up a friendship despite the objections of the people around her. The film is quiet and moving and the relationship and acting prowess between Haysbert and Moore was brilliant.

But there's another part from which you might know Haysbert even better. Before we had the real African American President Barack Obama, we had the fictional African American President David Palmer on the hit Fox show 24. After Jack Bauer, President Palmer would probably be considered the show's second greatest protagonist; for three seasons he continued to try and save the world by allowing Bauer to do what he did best, despite Palmer being constantly bombarded with assassination attempts. Palmer eventually decides against re-election at the end of Season 3 and spoiler: he later dies in Season 5.

And then finally, the moment we've all been waiting for. So far, you've seen clips with Haysbert and have probably recognized that voice. Yes, Haysbert is in fact the voice of the All-State commercials. With a voice that deep and reassuring, is it no wonder so many people remember those 30-second spots? In fact, it's difficult to think of All-State without first hearing Haysbert say a variation on "Are you in good hands?" With a voice like that, it's hard not to believe him. In fact, this gig is so synonymous with Haysbert's name that he's appeared on multiple talk shows to poke fun at it like this moment on Conan.

This gig right here might be the exact reason why Haysbert got the job as the narrator in How Murray Saved Christmas and for that reason, there's no way I'm not watching this adorable little movie on Friday night.

More like this
At 14, Jurnee Smollett Was Taking Meetings With Missy Elliot & Lauryn Hill
By Chloe Foussianes
Everything To Know About The Long-Awaited ‘Community’ Movie
By Stephanie Topacio Long
Gabby Petito’s Family Responded To The New Lifetime Movie About Her Final Days
By Grace Wehniainen
'Peaky Blinders' Creator Shares Exciting Update On The Upcoming Film
By Sam Ramsden
Get Even More From Bustle — Sign Up For The Newsletter