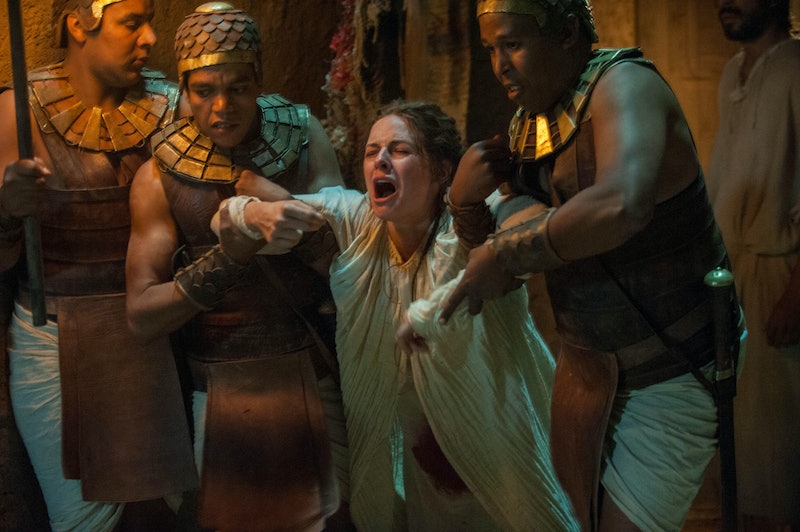 Lifetime's newest foray into scripted television begins on Saturday night with the first of the new two-part miniseries The Red Tent. While Lifetime's recent original films have focused on celebrities, such as Aaliyah: Princess of R&B, The Unauthorized Saved By The Bell Story, and The Brittany Murphy Story, The Red Tent is based on the book of the same name by Anita Diamant, which is in turn based on another book: the Bible. The Red Tent expands on the story of Dinah, as she explains in the book and movie that it was muted by the hundreds of men surrounding her. And while many changes and additions are made in the novel and miniseries, the origin of Dinah's story in The Red Tent was based on the Bible's Book of Genesis.

In the Bible, Dinah is the child of Jacob and Leah, and she is his only daughter. Her story is mostly overlooked in the text and described as just "The Rape of Dinah." But as Diamant's book and this new Lifetime miniseries showed us, there could be more to the story than meets the eye. In building off the Bible's story of Dinah, The Red Tent, and therefore Lifetime's adaptation, make quite a few changes. Most notably, it replaces Dinah being raped by Prince Shechem with a consensual, tragic (but not quite Romeo & Juliet-style) romance.

The Book of Genesis described Dinah's first meeting with her rapist and eventual husband Shechem as follows:

One day Dinah, the daughter of Jacob and Leah, went to visit some of the Canaanite women. When Shechem son of Hamor the Hivite, who was chief of that region, saw her, he took her and raped her. But he found the young woman so attractive that he fell in love with her and tried to win her affection. He told his father, “I want you to get Dinah for me as my wife."

The Bible then goes on to explain that Jacob discovered that Dinah had been raped, but did nothing despite her brothers' anger. Shechem and his father Hamor then visited the family and offered anything in exchange for Dinah's hand in marriage. Jacob and his sons said that the only repayment would be if Hamor and all of his men became like Jacob and his sons: They must be circumcised. Despite the process being difficult back in the day, the men accepted.

But two of Dinah's brothers, Simeon and Levi, took up arms against Dinah's husband and clansmen and killed every last one of them and took everything of worth from them as revenge. When Jacob asked why they would do such a thing they replied that they couldn't let their sister "be treated like a common whore."

The Bible story ends there, but obviously there is so much more intrigue to what happens next. Here, The Red Tent book and miniseries took liberties with the original tale and stretched it into a full, dramatic narrative that provides a much-needed voice to the sole woman in the original story. Despite their need to make it a two-part miniseries, the story still works and the added flairs bring quite the interesting point of view to a Biblical story lost in the shadows of those more epic.