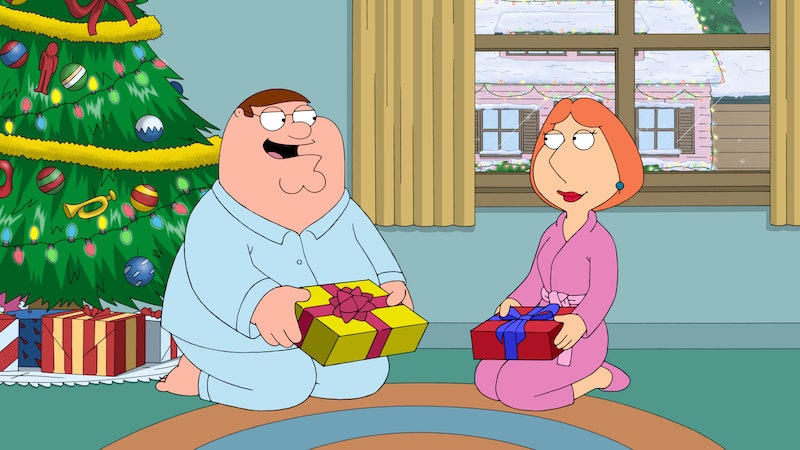 For 13 seasons now, Peter, Lois, Chris, Meg, Stewie, and Brian Griffin have been coming into our homes through our televisions to make us laugh and gross us out. That's over a decade of dealing with this crazy family. And why do we do it? Because despite its stupid, sometimes mean-spirited moments, the show still has its fair share of funny scenes. The last time we saw Peter and the gang was in the Season 12 episode "Turkey Guys," where Peter ate an entire Thanksgiving turkey, framed Brian as his accomplice, and was forced to go searching furiously for a replacement bird for dinner by Lois. The episode was pretty funny, but more than that, it hilariously poked fun at the importance of the Thanksgiving meal. After taking a few week hiatus, Family Guy is back on the air Sunday night with the episode "The 2,000-Year-Old Virgin" in which Peter runs into Jesus at the Quahog mall, discovers he's still a virgin, and convinces Quagmire and Joe to help him throw the "best birthday party ever." Well, that'll get some eyeballs to television sets. However that episode will serve as the fall finale, so when will Family Guy return? [UPDATE: Deadline reports Family Guy will return Sep. 27.]

According to The Futon Critic, we won't have long to wait, with the animated series' winter premiere being set for Sunday. Jan. 4. Despite the fact that Family Guy does, on multiple occasions, offend, shock, and insult pretty much everyone in the world, the fact that the show is an equal-opportunity parody machine makes it endearing and surprisingly well-balanced at times. That's one of the many things I want to see more of, but there are a few changes I'd make as well for the second half of Season 13.

Parodies Of Pop Culture Must Continue

Selfies, twerking, and any other ridiculous and yet somehow entertaining as hell inventions created by our generation are totally fair game for Family Guy, as are new films and shows. One of my favorite TV parody gags on Family Guy is a joke they did about How I Met Your Mother and Barney and Ted's friendship on the show. The joke even featured Neil Patrick Harris and Josh Radnor's voices.

More Jokes In Favor Of Women

There are times when the treatment of Meg and even Lois at times are too over-the-top to find funny. And trust me, I find a lot of ridiculous and sometimes offensive things funny. Considering the show has such great women voicing these characters, they should get more moments of making fun of the boys and taking them down a notch.

Only Do Crossovers That Work

The Simpsons/Family Guy crossover did divide critics and some fans, but it made sense to combine these two animated series even if some of the gags made no sense... unlike when Fox attempted to combine Family Guy with Bones. That might have been one of the many moments that made some fans believe both shows jumped the shark. The idea was interesting enough, the execution just made no sense.

As long as the show attempts to stay true to its original premise and doesn't try to go too overboard with dumb sight gags and attempts to be cooler and funnier than anything else on TV, the show can still work. I still have faith. And Sunday's episode actually sounds pretty damn intriguing and funny. Hopefully the rest of the season will follow suit.