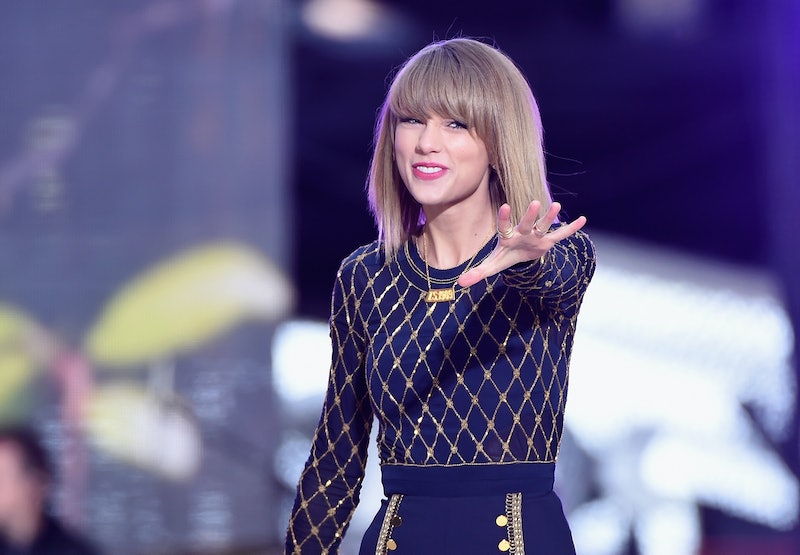 Is Taylor Swift your favorite celebrity feminist? To be completely honest, she's my second favorite after Queen Beyoncé, but it's hard to beat a woman who performed in front of a giant sign that said FEMINIST at the MTV Video Music Awards. However, Swift hasn't been doing too bad herself, between calling out the sexism inherent in the music industry to prioritizing her friends and fans over the revolving door of a love life she's rumored to have. When Swift was named Billboard's Woman of the Year, that came as no surprise to me. Now, her cover story interview with the magazine has been revealed and it turns out that Swift is taking a feminist stand in her career, as well. As if we needed another reason to love her.

According to Swift, she called all the shots going into her recent album, 1989, which is being touted as her most feminist album yet and which was, in part, recorded by Swift to prove that she doesn't need to be in a relationship to produce the same great music she always has. It also marked Swift's departure from country music straight into pop, unlike her previous records which would blend the two even if only for one song. "[Big Machine Records founder Scott Borchetta] went into a state of semi-panic," said Swift, of her label when they found out she wasn't recording a country album and wouldn't add a country twist to any of the songs. "It felt disingenuous to try to exploit two genres when your album falls in only one."

I mean, let's be real. Swift hasn't really been a country artist since her self-titled debut album, because she tends to get further and further away from the genre the more music she puts out. Which is absolutely fine, as it's all great music and she does it so well. It's less of a surprise to hear that her label wanted more country flavor on this album and more of a surprise to hear that Swift adamantly refused. Especially since her albums in the past, like Fearless for example, have seemed like an effort to exploit both genres while really mainly falling into pop. However, it's not just her music that Swift took into her own hands.

"I remember all the sit-downs in the conference rooms... they said, 'Are you really sure you want to do this?... Are you sure you want to put an album cover out that has less than half of your face on it? Are you positive that you want to take a genre that you cemented yourself in, and switch to one that you are a newcomer to?'" said Swift. "And answering all of those questions with 'Yes, I'm sure' really frustrated me at the time — like, 'Guys, don’t you understand, this is what I’m dying to do?'"

Essentially, not only is 2014 the year of Single Taylor Swift and Feminist Taylor Swift and Actual Angel Taylor Swift — it's also a year for the pop star to call all the shots with regards to her own career and image. Honestly, I'm not sure to what extent she has gotten to have this much say in her branding before, but it seems with every new interview the pop star gives that she, more so than anyone else, is in control over her own life. Her music reflected that, with the self-awareness and introspection of the songs on 1989 speaking of a woman who knows who she is, what she wants, and where she messed up in the past. However, it's a powerful thing to know that, as always, Swift doesn't just write these songs to write them. She lives them first.

And that's what makes Swift such an inspiration and more popular now than she's ever been. She's not perfect; I don't think anyone can claim to be. (Except Beyoncé.) It's more that she holds herself accountable for her own mistakes, owns her virtues and her flaws equally, and encourages everyone else to do the same. It's more that she refuses to keep her mouth shut when it comes to asking for what she wants or pointing out the flaws in the system that she's so deeply entrenched in, teaching her fans to speak up and speak out as well. It's more that Swift is a role model who is trying very hard to live up to that, and that's all we can really ask anyone who is in the public eye to do: try.

More like this
Everything To Know About Taylor Swift’s 10th Studio Album, 'Midnights'
By Grace Wehniainen and Jake Viswanath
There's A Taylor Swift Easter Egg In Ryan Reynolds' 'Deadpool 3' Teaser
By Marina Watts
How Ghosts Inspired Kesha's New Music
By Jake Viswanath
Beyoncé’s Special Tribute To Sister Solange Was Both Touching & Hilarious
By Stephanie Topacio Long
Get Even More From Bustle — Sign Up For The Newsletter