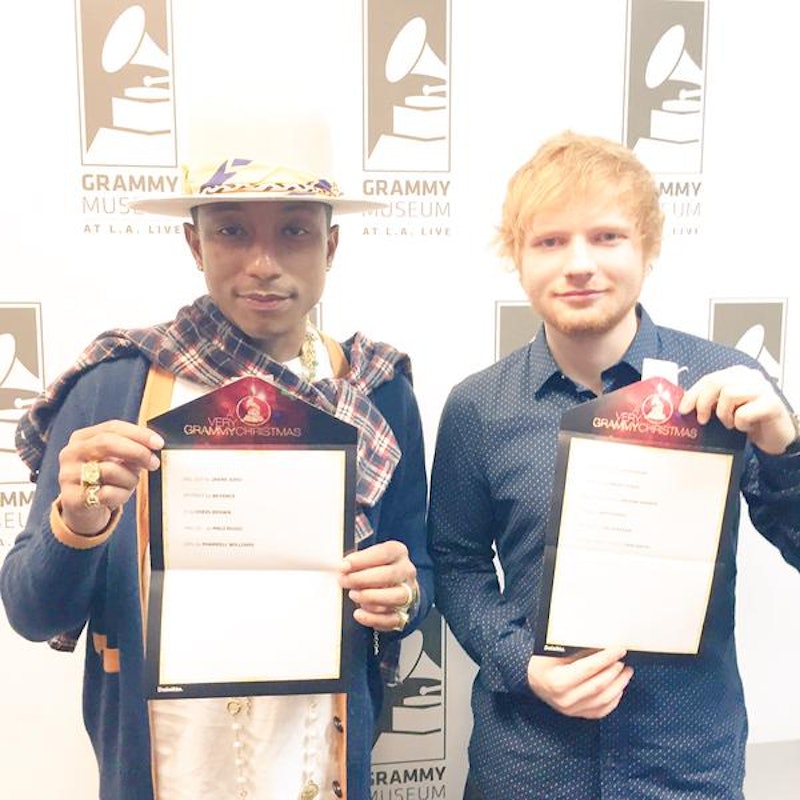 On Friday morning, Ed Sheeran and Pharrell teamed up with CBS' The Early Show to announce the 2015 Grammy nominees. It seemed like it would be good TV — after all, considering the massively successful year both the musicians had (Sheeran with hits like "Don't" and Pharrell with the song that will not die, "Happy"), they were nearly guaranteed a Grammy nomination of their own. And, sure enough, they both nabbed one. On The Early Show, Sheeran and Pharrell announced their own nods, with Sheeran scoring a Grammy nomination for Best Pop Vocal Album (X) and Pharrell for Best Urban Contemporary Album (Girl).

And they both couldn't be more bored with the news.

Whether it was fatigue (Pharrell noted he was tired) or lack of surprise (Sheeran admitted that he had looked at the nominees ahead of time), the two musicians were so stone-faced, you'd think they were reading their tax returns instead of their own nominations. Even Gayle King and CBS' correspondents in the studio noted Sheeran and Pharrell's apparent lack of excitement over the nods. (Replied Pharrell, "It's just super early, and we're just trying not to geek out in front of everybody. This is national TV.")

Sheeran added, "This is my excited face."

Of course, it's hard to blame Sheeran and Pharrell for their boredom. Over the years, the Grammys have transformed into an awards show that honors only chart-toppers in the main categories... and pretty much everyone who has ever written a song in the other categories. (Seriously, you could finish War and Peace faster than you can read through all the 2015 Grammy nominees.) Even seeing the line-up announced this year, we're finding ourselves looking like this too:

But perhaps we should stop being grinches, and listen to Pharrell's advice:

More like this
Ed Sheeran’s Surprise Gig Included An Iconic Britney Spears Tribute
By Bustle Editors and Darshita Goyal
Kesha Is Down To Be The Next Bachelorette
By Jake Viswanath
Everything To Know About Taylor Swift’s 10th Studio Album, 'Midnights'
By Grace Wehniainen and Jake Viswanath
Beyoncé’s Special Tribute To Sister Solange Was Both Touching & Hilarious
By Stephanie Topacio Long
Get Even More From Bustle — Sign Up For The Newsletter