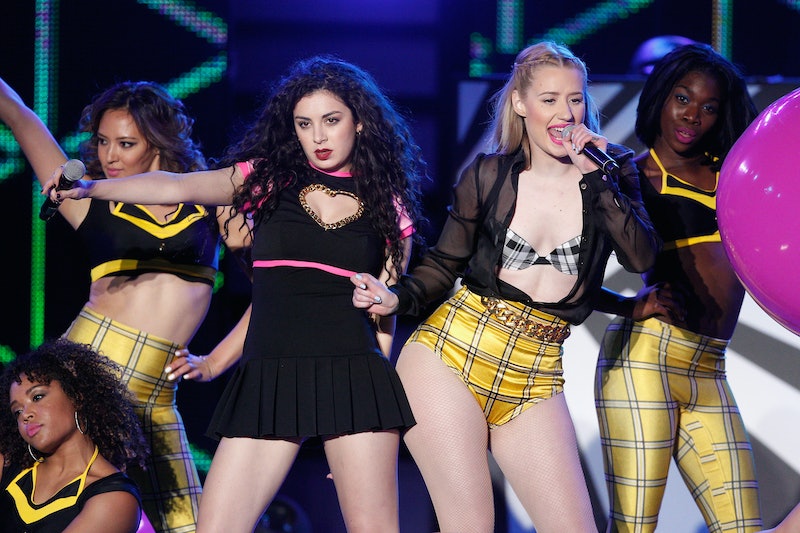 You waded through CBS’ ceaseless buildup and Pharrell Williams’ exhausted mumblings in the interest of celebrating (or lamenting, which can be just as much fun) this latest slate of Record of the Year Grammy Award nominees. And as the network rattled off the five names who’d be in contention for the big prize this time around, you might have noticed something interesting: for the first time in 16 years, the category is dominated almost entirely by women.

Comprising the list are Iggy Azalea (nominated for “Fancy”), Sia (for “Chandelier”), Taylor Swift (for “Shake It Off”), Meghan Trainor (for “All About that Bass”), and sole male artist Sam Smith (for “Stay with Me”), marking the first occurrence since the 41st Annual Grammy Awards in 1999 that at least four of the five nominees are female artists. That year, the category showcased Celina Dion, Madonna, and Shania Twain, in addition to The Goo Goo Dolls. Incidentally, 1999’s Album of the Year category was also the most recent to boast this degree of female occupation, with Lauryn Hill, Madonna, Sheryl Crow, Shania Twain, and the Shirley Mason-led alt rock group Garbage making up said category. Not a bad year for ladies in the music industry.

But it isn’t simply the volume of women that we should be lauding at this instance, but the thematic implications of the songs in question. Starting with Iggy Azalea’s “Fancy,” we see a championing of femininity as an ideal with the same bravado that the rap artist’s male counterparts so often drape their own gender and sexual identities. Azalea hypes up her character — a “bad b*tch” drinking cups of Ace, Goose, and Cris (never chased, of course), adorned in “high heels, somethin’ worth a half a ticket on [her] wrist” — as something to behold, to admire, and even to be a bit intimidated by.

Sia’s “Chandelier” is a somewhat more complicated piece, likewise celebrating the liberation in nighttime abandon (and paying due nod to the disconcerting remorse to follow inevitably the morning after). The interesting coupling of these themes allows Sia to illustrate the empowering function of this subculture in a young woman’s life — a realm in which to experience absolute command — without ignoring or devaluing her reign over the (often more oppressive, to all of us) daytime hours, as well.

It’s actually a theme explored further in Taylor Swift’s “Shake It Off,” which ropes in all of the negative connotations often assigned, by society, to a woman’s inclination to embrace the sort of “fun” allowed to the male population with no threat of judgment. While Sia’s number keeps footing in a recognition of “responsible living” (itself a fine message as her motives to adhere thereto seem to be rooted internally), Swift’s is more in the mindset of rejecting whatever the culture is demanding of her: it doesn’t matter what people say about your partying, your dating habits, or anything about you. Shake it off.

Finally, we come to Meghan Trainor, who presents ostensibly, though it's been debated, a positive message (for young girls, especially): no matter what the shape of your body, you should feel beautiful. Trainor’s delightful beat, playful lyrics, and incredibly danceable rhythms are paramount in provoking an emancipation from our culture’s rigid body image hang-ups, but one that is altogether fashionable. As anyone who has heard Trainor’s fun, fresh record “All About that Bass” even once can attest, the “good vibes” of this particular record are unparalleled.

All in all, it seems like a year that we can celebrate wholly in regard to the Record of the Year category. Hopefully it won’t be another 15 years before we see the Grammys recognize this degree of female empowerment once more.

More like this
Everything To Know About Taylor Swift’s 10th Studio Album, 'Midnights'
By Grace Wehniainen and Jake Viswanath
Twitter Is Freaking Out Over Rihanna’s 2023 Super Bowl Halftime Show Announcement
By Stephanie Topacio Long
Two UK Cities Are Now In The Running To Host Eurovision 2023
By Sam Ramsden and Rachel Mantock
The Spice Girls Just Dropped A Brand New Music Video
By Sam Ramsden
Get Even More From Bustle — Sign Up For The Newsletter