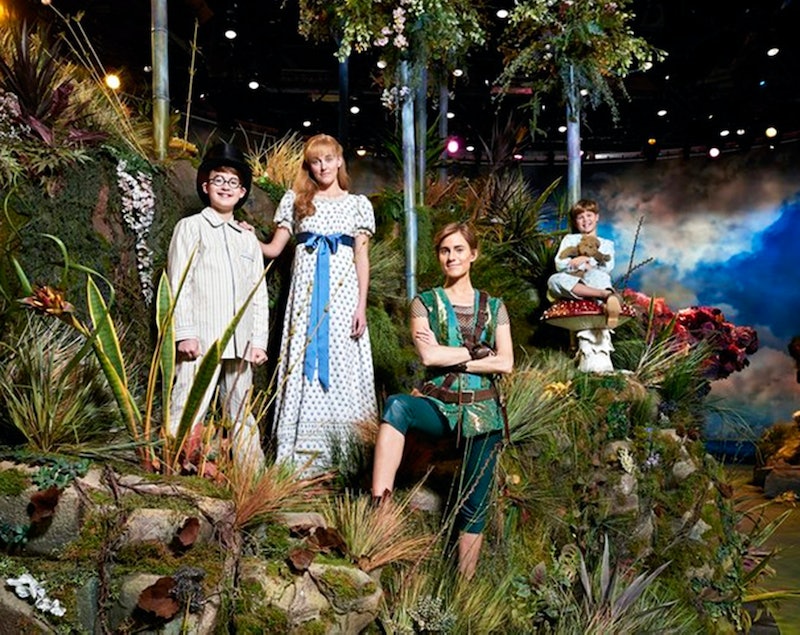 Between heated anticipation over the 2015 Grammy Awards nominations and residual impulsion to tweet snarky jabs at NBC's Peter Pan Live! , you probably didn't get too much sleep last night. This past 24 hours has marked a surplus of pop culture and music-related excitement (and dread), what with its Taylor Swift recognition, its One Direction snubs, and the much maligned spectacle that was NBC network's updated live show rendition of Mary Martin's claim to fame.

But perhaps there is a way to combine each of the morning's pop music intoxicants — mixing our dreadful Peter Pan Live! hangovers with that nasty Grammy nom hair-of-the-dog — into one potent elixir. I'm talking about the Peter Pan Live! Grammy Awards: recognition of the varied accomplishments and efforts of the brow-raising stage musical.

Looking back at the three hours spent with Allison Williams, Christopher Walken, and a stable of 30-year-old Lost Boys, you can find plenty to adorn with accolades. True, maybe the traditional "Best Song" and "Best Performance"-type awards are out of the question here, but... get creative. You'll think of a few superlatives that the show and its performers might warrant.

So, take a look below at our own Peter Pan Live! Grammys — memorializing all of the remotely positive things we could manage to think up about that endless exploit in dazzling confusion.

While Allison Williams slipped in and out of her British tongue and Christopher Walken seemed bent on retconning Captain Hook's backstory to an upbringing adjacent to the N Train, the Darling children all deserve recognition for sticking to that Cockney intonation through and through.

While Twitter may have lamented Walken's half-hearted rendition of the Hook character, it was in fact quite an impressive turn for an actor who didn't even actually seem to be awake at the same. Not since the Academy snubbed Terry Kiser has such an impressive feat of acting by an unconscious person gone so unappreciated.

Best Attempt at Eschewing Racist Tradition in a Song

Purists of the source material might take issue with some of the new songs and updates instituted in NBC's version of the show, but no one should be too upset with the endeavor to eradicate the racism against Native Americans included in old incarnations of Peter Pan. Long gone are the days of "Ugg-a-Wug," thankfully.

Peter Pan Live! set forth a number of new songs, dances, and added reprises of old numbers, many of which seemed a trifle unnecessary. But one tossed-in ballad is justified completely by the performer who sings it: a second go-'round of "Only Pretend," delivered by Mrs. Darling herself.

Winner: Kelli O'Hara, whose voice is reason enough for any tacked-on musical numbers.

Although Williams was rather stiff (especially for the portrayal of an adolescent boy who lives for irreverence and adventure), there was but one moment that shined a light on the child that lives within her, and you know the one.

Winner: The "I do believe in fairies!" scene. She practically turned into a Disney cartoon there.

While almost every actor in Peter Pan Live! flubbed a cue or two at one point or another, one minor player managed to hit every mark she was given, and in such a thankless role! We think she deserves to top honor of the evening.