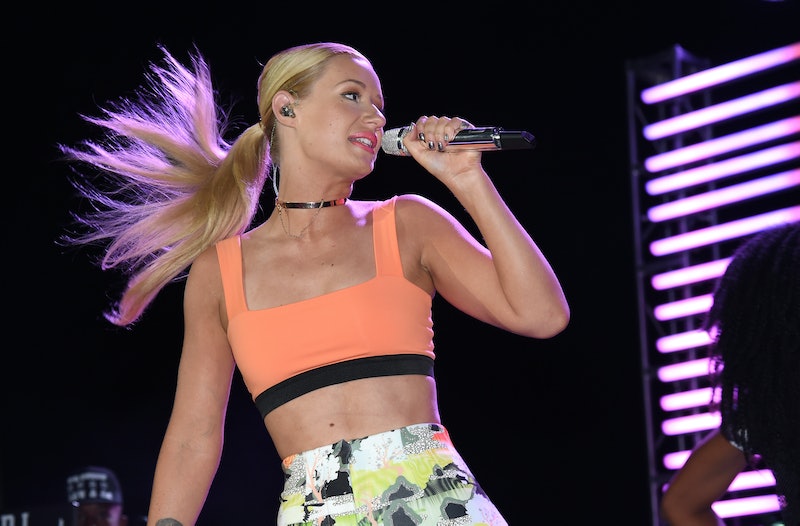 On Friday morning, nominations for the 57th Annual Grammy Awards were announced, and I have to say I'm pretty psyched about the songs that popped up in the Record of the Year category. Many worthy tracks were vying for a nomination, and, thankfully, Academy voters ended up making some really strong selections. (Athough, of course, there are also a few snubs that sting.) The 2015 Grammy nominees for Record of the Year are "Fancy" by Iggy Azalea and Charli XCX, "Chandelier" by Sia, "Stay With Me" by Sam Smith, "Shake It Off" by Taylor Swift, and "All About That Bass" by Meghan Trainor. That's a pretty solid group.

To be honest, I'm more than a little surprised that "Let It Go" from Frozen didn't score a nod here — that song was inescapable for a while. Other notable omissions include Coldplay's "A Sky Full of Stars," Ed Sheeran's "Sing," Katy Perry's "Dark Horse," Ariana Grande's "Problem," Eminem & Rihanna's "Monster," MAGIC!'s "Rude," and A Great Big World & Christina Aguilera's "Say Something" (just to name a few). Record of the Year is definitely a tough category to break into, that's for sure.

Let's look at what the 2015 nominees have in common.

Arguably, all five nominated songs fall into the pop genre. There are a variety of different styles and sounds represented (which is awesome), but they're all still pop songs, if you ask me. Yes, even "Fancy." In my opinion, it's Charli XCX — not Azalea — who dominates that record. Sadly, rap, country, R&B, and rock were all left out in the cold.

"Fancy," "Shake It Off," and "All About That Bass" all reached No. 1 on the Billboard Hot 100 chart this year. Meanwhile, "Stay With Me" peaked at No. 2, and "Chandelier" at No. 8. Clearly, chart success continues to be an important factor in this category. (For comparison, there were four No. 1 songs among the 2014 Record of the Year nominees.)

This one kind of seems like a no-brainer — if all of the nominees are big hits, it stands to reason that they're all pretty catchy, as well — but 2015's nominated songs seem to be especially infectious to me. They're just so much fun to sing along with. You know Charli XCX's hook is the best part of "Fancy."

Most Artists Are Women

Five talented women are nominated for Record of the Year this time around. To the contrary, at the 2014 Grammys, Lorde was the only woman represented in the category. What a difference a year can make! As Bustle's Michael Arbeiter points out, this is the first time that Record of the Year has been dominated by women since 1999. Wow.

Most Artists Are New to the Grammy Game

Of the six artists nominated, four (Azalea, Charli XCX, Smith, and Trainor) had never been nominated for a Grammy before this morning. Sia was nominated in 2013 for her Flo Rida collaboration, "Wild Ones." Swift, of course, has already won seven Grammys in her career. (What a show off, am I right?)