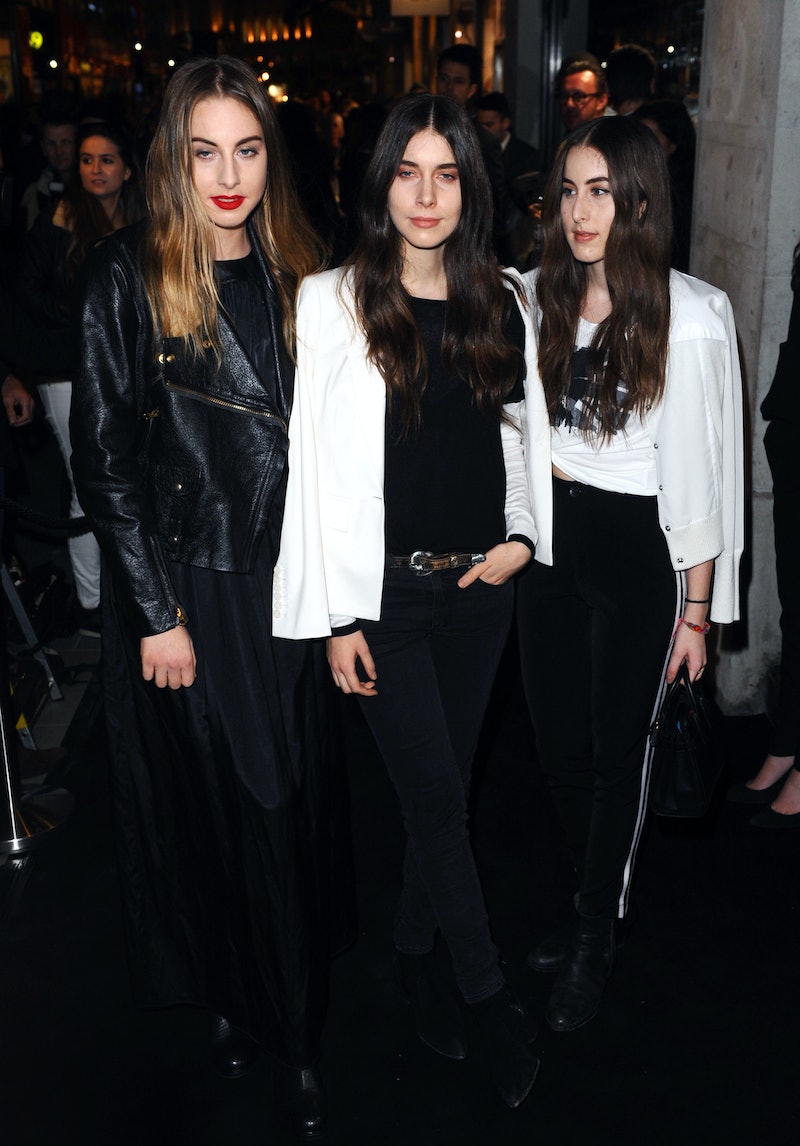 The most-anticipated category of the year at the Grammys is by far Best New Artist. It's the music industry's way of saying, "Here's who made the biggest first impression." The award also has a history of either blessing or totally cursing its recipients. This year, we'll find out if Iggy Azalea, Brandy Clark, Sam Smith, HAIM, or Bastille will take home the honor. The Grammys are making fans even more eager this year as the nominees are being announced throughout the day on Twitter. Though the debate seems to be focused on Azalea and Smith, I wouldn't put HAIM out of the running just yet. When it comes to the Oscars, nominations always seem to focus on the films that are released in November and December, but HAIM is like that sleeper summer indie that sticks in everyone's heads come award season (hello, Boyhood). Azalea and Smith might be making the most noise right now, but HAIM deserves the award over the competition. Bar none.

The three-sister band's infectous genre-bending debut Days Are Gone has been called "outstanding" and "impeccably crafted" by Pitchfork (who is notoriously picky) as well as "the kind of microtriumph you sit up and root for," by Rolling Stone . HAIM absolutely exploded onto the indie and rock circuit this year, taking critics and fans by surprise, sweeping everyone up into their sunny, sometimes moody, but always rock and roll LA sound. Here are all of the reasons why HAIM should absolutely win Best New Artist:

This Ain't The Billboard Music Awards, Y'All

Year after year, I hope the Grammys won't be the same predictable popularity contest that it has become over the last decade. Year after year, I'm left feeling predictably disappointed. But maybe, JUST MAYBE, this year my dreams will come true and the Best New Artist will actually go to the band who artistically created something that is as appealing as it is eye-opening to music-lovers across genres. C'mon Grammys, try and tell me that "The Wire" isn't as catchy as "Fancy" or as relatable as "Stay With Me." Remember when Arcade Fire's The Suburbs won Album of the Year in 2011 over Eminem, Lady Gaga, Katy Perry, and Lady Antebellum? Yeah, we need another moment like that.

Days Are Gone Doesn't Blur Together

There isn't a single track on HAIM's album that I skip over. I remember the first time I listened to it in full. I immediately thought, "Where has THIS been all my life?" I can't say I feel the same about any of the other nominees. Each song stands strongly on its own, and when put together create a stunning work of art. Quite honestly, many of the other artists in the category tend to sound a bit same-y in their albums. You won't find that with HAIM. Somehow, such stylistically and lyrically different songs like "My Song 5" and "Honey and I" really do work together. With HAIM, you get a taste for all of their varying influences — you're never left tired of one thing, rather, you're just hungry for more.

We Have to Eclipse Evanescence

Evanescence was the last female-fronted band to take home the award. Please, please HAIM, don't let this be it.

HAIM is made up of three sisters: Este, Danielle and Alana Haim, plus an unrelated, but just-as-painfully-stylish-and-badass drummer Dash Hutton. With the media constantly trying to pit women against each other, it's so damn nice to see a band of actual sisters rise to the top. Watching them play together shows just how much blood, sweat, and tears go into their work. They are pounding, electric, and no-holds-barred when they're together. They distill that California sunshine into songs that punch you in the gut or make you want to dance all night. Either way it's a party that everyone wants to come to.

An All-Female Band Has Never Won the Award

Not once since 1962 has Best New Artist gone to an all-female rock band. We all know women rule the pop game, that they make the boys sit down and shut up in country, and that they are changing the game in hip-hop... but when it comes to rock and roll, it's still very much a boy's game. If HAIM takes home this award, they'll make history. How often do you hear women playing when you turn on a rock or alternative station? Heck, how much do you hear women playing even when you listen to Pandora or Spotify? There are so many talented female artists who aren't in the pop, country, or hip-hop game and thus aren't being heard. If HAIM wins this, the industry might finally start listening a lot more to women who play guitars, drums, basses, and who snarl into the microphone. It's just their time.

More like this
At 28, Melanie C Was Falling In Love & Reclaiming Her Confidence
By Olivia-Anne Cleary
Everything To Know About Taylor Swift’s 10th Studio Album, 'Midnights'
By Grace Wehniainen and Jake Viswanath
Kesha Is Down To Be The Next Bachelorette
By Jake Viswanath
Dan Levy Appears In The Latest Teaser For The Weeknd's HBO Series, 'The Idol'
By Jake Viswanath
Get Even More From Bustle — Sign Up For The Newsletter