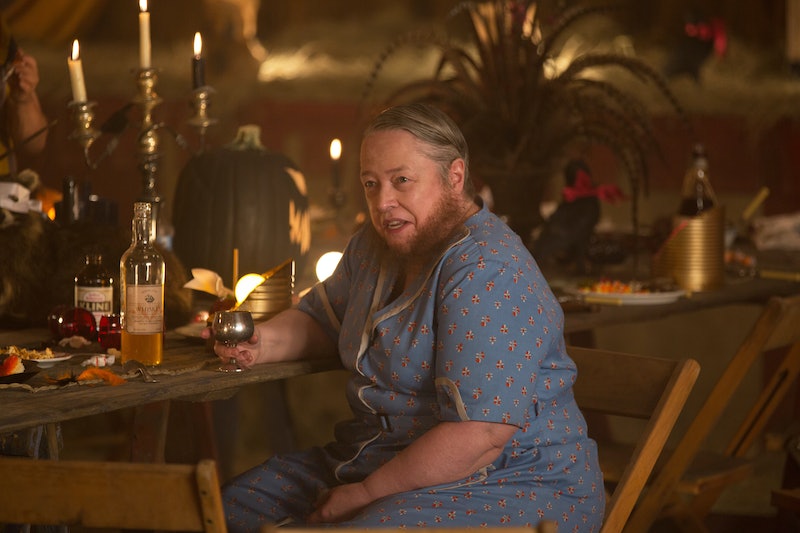 Gone too soon was Ethel Darling, on American Horror Story : Freak Show . Killed at the hand of the one person she would have done — and basically did do — anything for, Kathy Bates' character's death felt sudden and anything but reasonable on the most recently aired episode of Freak Show. But since "dead" on American Horror Story rarely means dead and gone forever, there still felt to be a sliver of hope that Ethel would return to Jupiter, Florida, in some capacity. "You never know with American Horror Story," Kathy Bates says during a conference call with reporters on the potential return of Ethel Darling.

While Ethel had her own demons to vanquish — she was not only sick with liver cancer, but also a relapsing alcoholic — her character was as pure as they come on a show about monsters living in the world around us. Her exit in the show, while sudden, seemed to be at a point in Ethel's storyline that Bates' was happy with. "It's an old saying in show biz, leave 'em laughing. You want to leave them when they're still in love with you," Bates tells me.

Which is exactly where Ethel left us. Ethel's character was one that you couldn't help but love and root for, since she felt like a good heart among many dark souls. Bates, who says she identifies mostly with Ethel's authenticity, strength, and struggle, says "I trust Ryan [Murphy, the creator of the show]," when asked if she felt Ethel was gone too soon and still had things to contribute to the season.

"It's been a good run," Bates mentions. "I was really happy with the scene between us, it was bittersweet." The scene Bates is referencing, when Ethel's long-time friend, Elsa, kills Ethel in the heat of the moment, only to cover up her murder with the conman haunting the show, was one of the most harrowing scenes of the season so far. Viewers of the show have become used to seeing its villains hurting the innocent, but with Elsa killing Ethel, it lent a different kind of darkness, since these two characters have a backstory unlike any other characters this season.

While Bates remains tight-lipped as to what capacity Ethel could return, knowing that Bates is still in New Orleans — where this season of AHS is filmed — should give fans of hers and viewers of the show hope that we haven't seen the last of Ethel Darling.