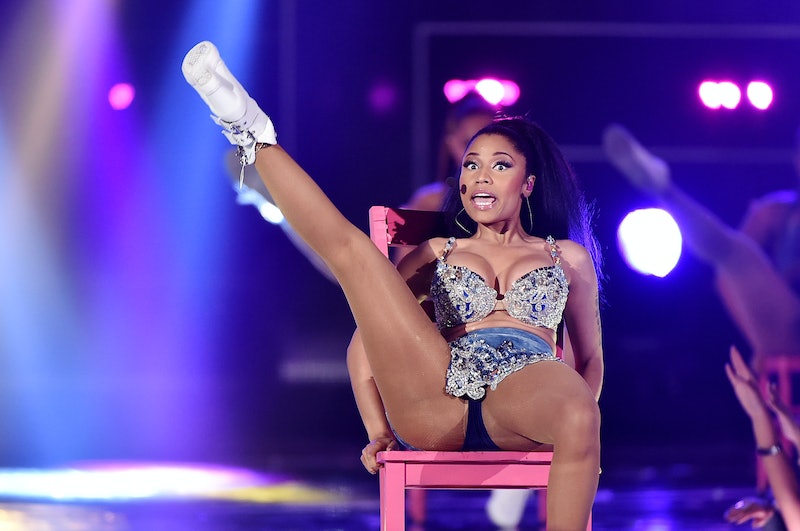 Update: More nominations came out later on Friday, and while Nicki is not nominated for Best Rap Performance, she is nominated for Best Duo/Group Performance for "Bang Bang" with Ariana Grande and Jessie J, and for Best Rap Song (a songwriting award) along with her "Anaconda" co-writers. There are new things to be mad about every day in the entertainment world, as I have learned from my time writing about pop culture. And on Friday, Dec. 5, it's the fact that Nicki Minaj was robbed of a Grammy nomination for Best Solo Rap Performance (and, as Bustle's Kadeen Griffiths thinks, Record of the Year for "Pills and Potions"). Though I thoroughly approve of many of the nominations — Beyoncé, obviously, and my girl St. Vincent being nominated for Best Alternative Album — it's more than a little disappointing that Nicki was looked over for her bomb release of "Anaconda" in August. In fact, NO women were nominated for the Best Solo Rap Performance category. What's up with that?

The five nominees this year for rap performance are:

Some fair choices — I stan for Drake and Kendrick Lamar, and I hope Kendrick wins because he was robbed last year (nominated for six awards, and didn't receive a single award — but beyond that, my first thought was, "Who the hell is Lecrae?" followed by, "Are you kidding me with Eminem?!"

Regardless of my personal preferences, though, it's so frustrating that not a single woman, Nicki or otherwise, was nominated for the award. But I'll be the first to admit that I don't really understand how nominations for the Grammys (or any awards show, for that matter) are decided. So, initially trying to give the Grammys the benefit of the doubt, I looked up the nomination process: In order to be eligible for any given category, you must be nominated from a pool of entries. Songs, albums and performances that are eligible to win must have been released between October 1, 2013, and September 30, 2014.

May I remind you that "Anaconda" shook the world on August 4, 2014?! With the greatest sample ever from Sir Mix-a-Lot and a music video that reignited a love for butts, "Anaconda" was officially declared the most watched music video on YouTube in 24 hours (previously it was Miley's "Wrecking Ball"). Minaj has shattered so many barriers in the rap world for women, and she's one of the hardest hustlers.

Not only is "Anaconda" the jam of all jams, it opened up a dialogue about body image and body positivity. Plus, have you SEEN the music video? It's truly been the year of Nicki Minaj. She's ascending to the top of the rap world. And yet, a nomination went to Eminem, who, in my humble opinion, has been irrelevant this year and when he finally popped up again he made a crude joke about the Ray Rice scandal. Minaj has not yet spoken about the snub, but knowing her, she will definitely have something to say.