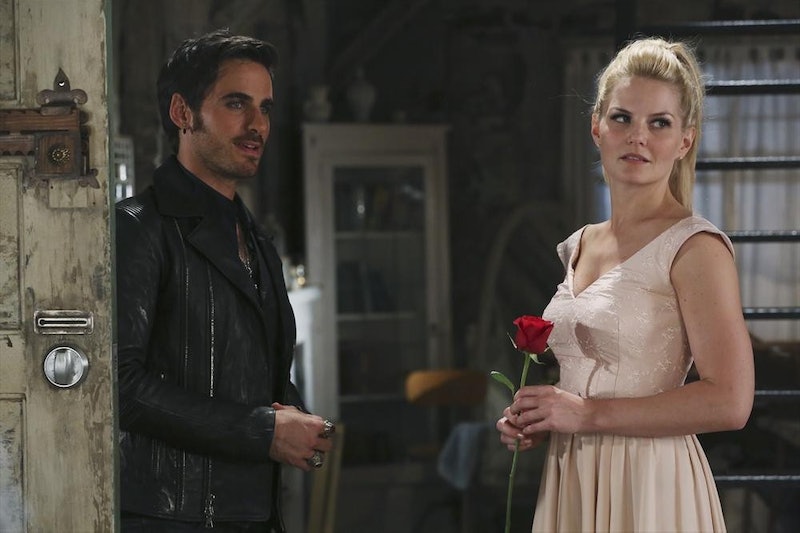 You know what might be nice for Emma Swan? If she could enjoy a little uncomplicated romance during her off-days from being the Savior and having to carry the weight of Storybrooke on her shoulders. But it doesn't seem like Once Upon a Time Season 4 has any intention of letting that happen. During "Smash the Mirror Part 1 & 2," Rumplestiltskin took Hook's heart and revealed his plan to kill everyone's eyeliner-wearing pirate — eventually — and I can't think of worse news for Emma. Because, with The Snow Queen courting her to join her new "perfect" family, it's possible that Hook's death will make Emma turn away.

There are some extremely important factors working against Emma right now — aside from the fact that she's generally closed-off and stand-offish when it comes to letting people into her life. Emma's history, romantic and otherwise, will work against her when it comes down to dealing with the fallout of Rumplestiltskin trying to kill Hook. For the first time in a long time on OUAT, Emma questioned whether or not she belonged with her family in Season 4. And, even though Elsa helped her to realize that her magic doesn't have to isolate her from the world, Hook's death will push her over the edge and, depending on how it happens, it could absolutely push her into believing The Snow Queen's line of BS and convince her to run away from her problems and the seemingly destructive life she's been living in Storybrooke.

It'd be sad for Emma to run from being the Savior at this point because she's finally starting to build important relationships, both romantic and otherwise. In Season 4 alone, she's opened herself up romantically with Hook, she's developing female friendships with Regina and Elsa, and her relationship with Henry is changing as well. But, even though I'm convinced — because good always triumphs over evil — that Rumple's plan will ultimately fail and Hook won't have to die, what would happen if he did?

As much as I hate to drum up some old heartache, on a basic level, Emma's going to think of Neal immediately if Hook were to die on OUAT Season 4. I mean, what are the odds that TWO of Emma's love interests die on this show? And, this time, with Emma fresh off of her quick foray into paranoia that she didn't belong with her family or non-magic people because she's "dangerous," I'm willing to bet that she's going to take it significantly worse. We've already seen Emma run away from Henry this season because she believed she could hurt him, if Hook dies, it's reasonable to expect that Emma will run away from everyone, being the Savior, and her life in Storybrooke. Especially now that almost everyone she could rely on for support is under the Spell of Shattered Sight and are essentially useless to any productive cause.

Sure, it'd be great to assume that Emma would power through Hook's death and force herself to realize that this has nothing to do with her, just the world she lives in. But, right now, she has an out. The Snow Queen, as crazy as she is, can offer Emma a new life and an opportunity to leave all of her heartache behind. And, I mean, after watching two loves of your life die, anyone's resolve to stick around and be strong for the rest of the people in her life would be tested. This is the longest Emma's stuck around in one place in her life — deep down, at the bottom of it all, her initial reaction to a struggle is to run away. Even if she's done her best to be everything everyone's needed her to be all of this time.

I'm choosing to believe that Hook won't die and that Emma will fight The Snow Queen and this spell with every last ounce of her badassery. But, if we look at her history, it's entirely possible that Hook's death with force her to run — straight into the arms of The Snow Queen and her "new perfect family." Which, as much as I hate to say it, would make for an interesting second half of OUAT's fourth season — watching Emma struggle between a fake, ideal, painless life and a life with real family, real feeling, and the possibility for love.

More like this
The First Clip From Netflix’s Queen Charlotte ‘Bridgerton’ Prequel
By Bustle Editors
The Queen’s Cause Of Death May Not Be Formally Announced
By Shahed Ezaydi and Catharina Cheung
'The White Lotus' Season 2 Trailer Teases Multiple Affairs & Another Dead Body
By Bustle Editors
Who’s The Richest 'Grey’s Anatomy' Star? See The Net Worth Of Each Cast Member
By Hugh McIntyre
Get Even More From Bustle — Sign Up For The Newsletter