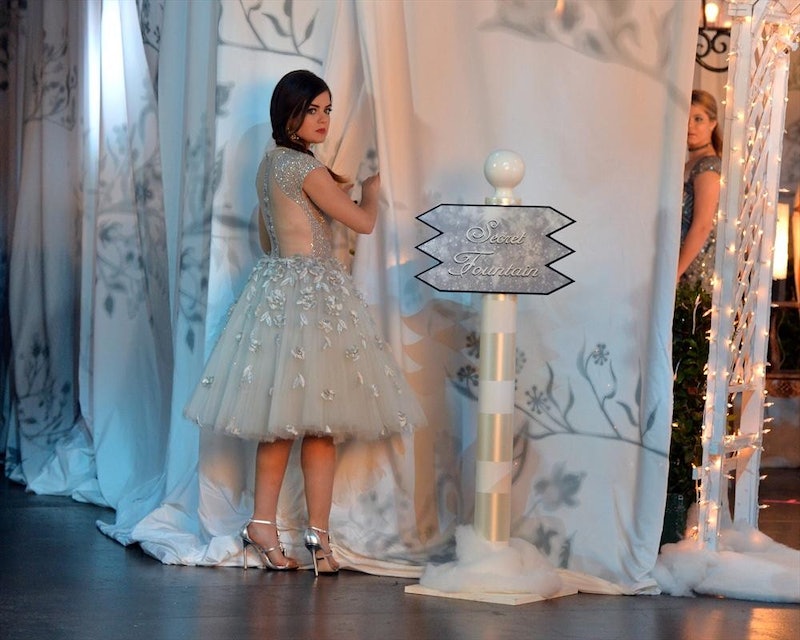 Aria Montgomery might want nothing more than to chow down on some pie with her sweetie Ezra this holiday season, but unfortunately for this little liar, she's going to have to wrap up a slice in order to get to sleuthing. The Pretty Little Liars Christmas episode "How The A Stole Christmas" airs Dec. 9 and from the promos it looks like we shouldn't expect very much holiday cheer for our little liars... at least, no more cheer than these ladies get during any other time of the year in Rosewood. Aria may have wanted nothing more than to finally reconcile with Ezra this holiday season, but it doesn't look like romance will be the only thing on her mind — at least, according to the spoilers and promos for the new episode. So what is Aria doing this holiday season? Here's what we know so far.

Anyone with eyes should be suspicious of Ali, but Aria's eyes are on Ali's as the Queen Bee descends the stairs with her replacement posse.

She Actually Does Make A Pie

The Pretty Little Liarspromo photos feature Aria holding up what looks like a pretty tasty pie. Another spoiler for the holiday season? Apparently her teacher beau is a pretty good cook. From the looks of the photo, it seems that he might have helped make a little liars potluck — let's hope this one isn't interrupted by another murder.

She Gets A Sweet Gift From Ezra

In this promo Aria receives a very pretty box from Ezra — along with a set of equally as gorgeous earrings. The best part? This is Ezra's idea of a "low-key" Christmas. The secretly-loaded teacher once got two ponies for Christmas — even though he "only asked for one."

According to this PLL sneak peek, Aria gets her hands on a holiday snow globe, only to find out that it has a message from A inside — and it ain't "Merry Christmas." The message Aria receives? "A takes a holiday, you should too." It's essentially a very Christmas-y gag order.

Aria and the other liars mission? Go to Alison's ice ball — in order to get intel on the Queen Bee herself. Aria and her pals are on the hunt for something that will help clear Spencer's name of Bethany Young's murder, and they think that they can obtain the information at the Christmas party.

An adorable, festive cupcake, but a cupcake none the less.