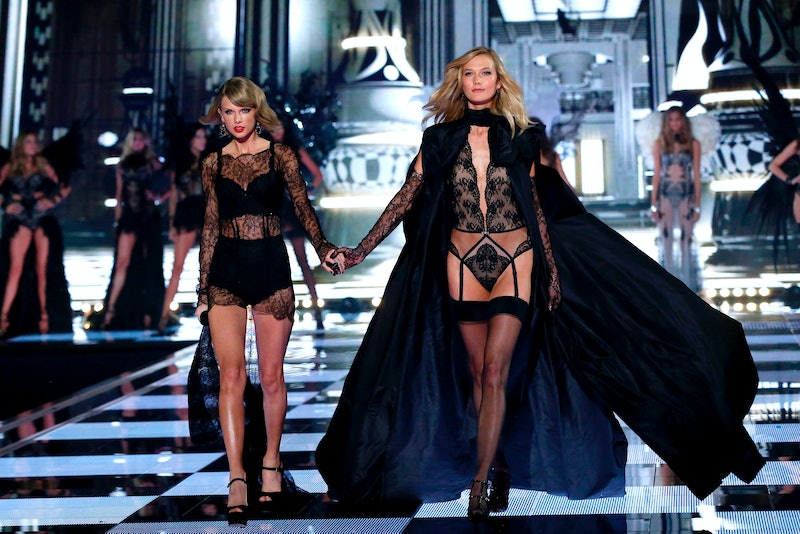 If I could pick any celebrity in the world to be my best friend, I'd pick Taylor Swift. She seems like the most awesome BFF in the world, even without the millions of dollars and number one album. This is probably why I'm simultaneously in love with and jealous of Swift's relationship with Victoria's Secret model Karlie Kloss. The two of them together are the most adorable pals ever, especially when they represent the twin ballerina emoji. In fact, they're so cute, that some fans are letting a little wishful thinking cloud their judgment. When Kloss and Swift were spotted out together at The 1975's concert in New York on Thursday night, a photo taken of them together made it look like they might have been engaged in a lip lock, and the rumor that they're a couple quickly spread. And for those of you who were hoping it was true, I have some bad news for you: Swift and Kloss, as a romantic couple, are not happening.

According to Swift's rep, the rumors are "hilarious" — and instead of kissing, Swift and Kloss's faces were just close because they were trying to hear each other over the loud music. Plausible, although after seeing the offending photos, it does make sense that some people might've thought they were smooching.

And as precious as Kloss and Swift are as besties, it kind of breaks my heart that after all of this — this being Swift breaking multiple records with 1989 and making powerful feminist statements all over the place — that the media's still talking about Swift's love life. Like, did they even listen to "Blank Space"? Worrying about who Taylor Swift is or is not dating is so 2013.

And instead of spreading rumors about Swift's possible romances, there are a lot of rumors the media should be spreading instead. Like...

Maybe it's a Benjamin Button thing, or maybe it's a secret, Disney-esque curse, but it's totally possible that Swift is an elderly woman who's simply stopped aging. How else would you explain the constant needlepointing and her penchant for Law & Order?

She Has a Side Job as a Cat Whisperer

Just like My Cat From Hell's Jackson Galaxy. Or maybe she is Jackson Galaxy. Who's to say? But there's no way her cats, Olivia and Meredith, are naturally that well behaved. As the owner of two cats myself, I can guarantee you neither of them would cooperate enough to appear in a Diet Coke commercial.

She Does Car Commercials... in Japan.

No, wait, maybe that was just Regina George.

A world where Swift is vice president would be so magical. Free, homemade cookies every Friday, handwritten thank you notes every time a bill gets passed, and you know she'd change the national anthem to "Shake it Off." This is a reality I want to live in.

Now that she's BFF with several of the Angels — Kloss, Lily Aldridge, and Martha Hunt included — maybe they've persuaded her to join their side. Swift clearly has what it takes to strut down the runway in big, heavy angel wings. I wouldn't hate it.

She Just Purchased the City of New York Outright

Doesn't her ambassadorship make so much more sense now? Don't act like she doesn't have the cash flow.

I used to spend my days fighting Swift haters on Facebook, but since 1989's release, I suddenly have a lot more free time. I'm just saying, all the hate did seem to come to a halt pretty suddenly.

More like this
Everything To Know About Taylor Swift’s 10th Studio Album, 'Midnights'
By Grace Wehniainen and Jake Viswanath
Taylor Swift Wants To Direct A Movie Next — But You Might Have To Wait
By Radhika Menon
Kanye West Apologizes To Kim K "For Any Stress I Have Caused" In Rare Interview
By Jake Viswanath
Adam Levine Denies Having An Affair — But Admits He “Crossed The Line”
By Jake Viswanath and Radhika Menon
Get Even More From Bustle — Sign Up For The Newsletter