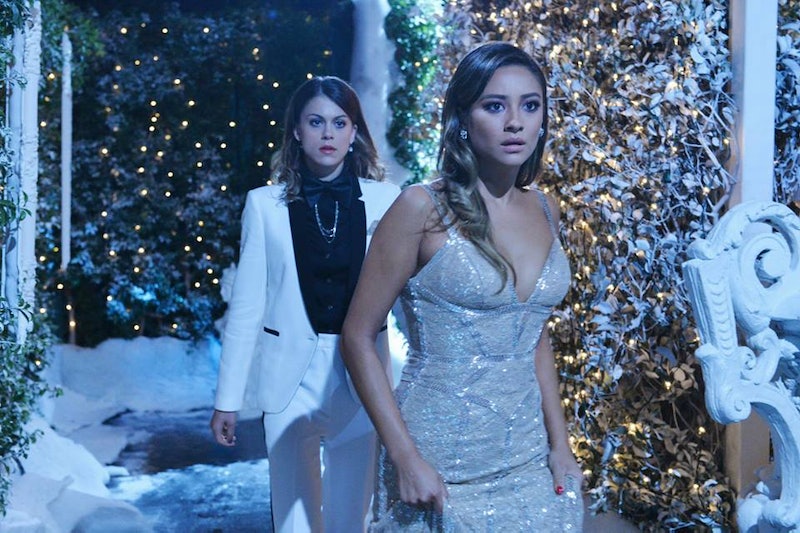 If you were to ask me which one of the Pretty Little Liars loves Christmas the most, I never would have guessed Emily Fields. I probably would have guessed Hanna, since she seems like she is all about the gift giving, wrapping paper, glittery-gaudy sweater season. I wouldn't have guessed Emily. But, as we learned in the Pretty Little Liars Thanksgiving episode, the last one before the hiatus between season 5A and 5B, Emily loves Christmas. Aside from her love for the holiday, what else is there to know about Emily before the PLL Christmas special?

When we last saw Emily, she was pulling out all the stops for the holiday episode, even wearing a fitting shirt proclaiming "This Girl Loves Christmas." Even Shay Mitchell was thrilled to learn about the holiday episode, because she loves Christmas, "not as much as Emily, but close.” Even though it's got the bright and festive spirit of the holiday season surrounding it, undoubtedly the episode will still have it's fair share of twists, turns, and secrets. Even though this is Emily's favorite holiday, after "How A Stole Christmas" the holiday might leave a sour taste in her mouth.

Last season saw a little bit of a romance rekindle between Emily and Alison. Even though there might be plenty of 'shippers for those two out there, the idea of Emison confuses executive producer Marlene King. "It's so funny to me that, even with what we've seen of Ali to date, that there's such an overwhelming amount of fans who still want to see Alison with Emily." But for one thing, there won't be any sort of Love Actually romantic gesture between the two of them at the Ice Ball.

"Emily feels like she has been betrayed by Alison," King says. "That's where we begin the episode and that's very much a part of her story."

But, There Might Be Another Romance In The Air

King told TVLine that Emily's relationship with Paige will take a "turn." What kind of turn? Probably one that brings the two back together — finally. A moment where all the Liars' guys and Paige put on Santa boxers is making its rounds across the internet — and seriously, rightly so it looks like Emily and Paige are back together after all.

Paige wears a white tux with black accents. I have a lot of complicated feelings about this wardrobe choice. I just don't know, you guys. I'm on the fence about this. My biggest concern is if she accidentally spills eggnog on it? Then what?