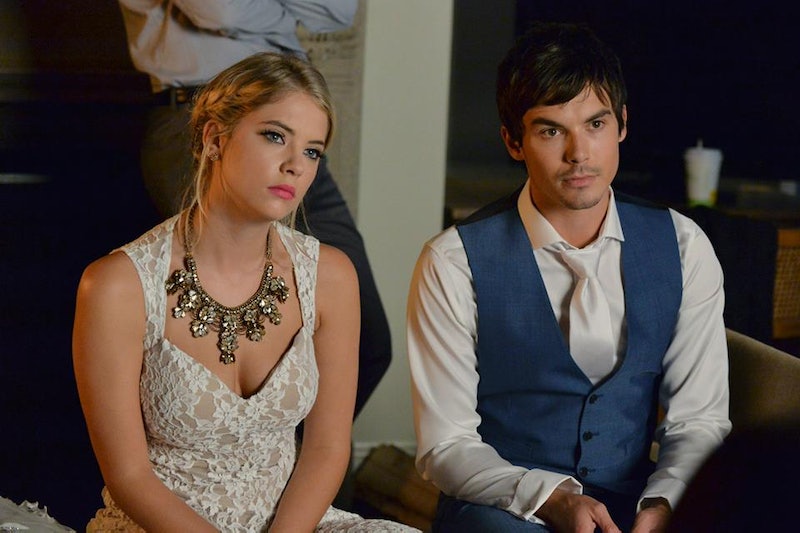 If anyone were to be an honorary Liar, it would be Caleb Rivers. He's been with the Pretty Little Liars gang since just about day one, and back then he was helping them crack into cellphones and being their all-around tech wiz for whoever/whatever they needed to track. He's stuck with Hanna through thick and thin, and that proves true again for the Pretty Little Liars Christmas episode. While he's not on the top of A's hit list, what can we expect from Caleb for the PLL Christmas episode?

For starters, he's kind of got that "bah humbug" spirit, evidenced by the clip below. But, it's totally merited, considering that from previews released, it seems that Hanna has roped him into volunteering at some children's event, and Caleb is just not feeling the holiday spirit. Also — probably Hanna's idea, too — they're dressed up as elves. While they both might look adorable (and Caleb is probably scoring major boyfriend points), he wants out of the situation ASAP. I mean, according to Caleb, a little kid peed on his costume, so that's a clear sign to get the heck out of there. A wouldn't sick a little kid on Caleb with that kind of torture, would she?

What else is in store for Caleb this holiday season?

There Will Be Cuteness

In an ET interview with executive producer Marlene King, and the one sentence tease she could give about Hanna and Caleb together was, "They are very very cute." How about something we don't already know?

An Elf Costume Isn't The Only Thing Caleb's Rocking

The context of this dress up situation hasn't yet been revealed, but do we really need a reason why? The men of PLL (and Emily's main squeeze, Paige) dress up in Santa boxers and... do we honestly need to know any more than that? This episode is, so far, the gift that keeps on giving.

Caleb's on The Road to Recovery

Love it or hate it, Ravenswood happened and now we all have to move on from that, Caleb included. He told TVLine that he's "mostly" recovered from his dark time there, which is wonderful to hear. But he's not fully recovered, which means there still might be a ghost or two still lurking in his closet.