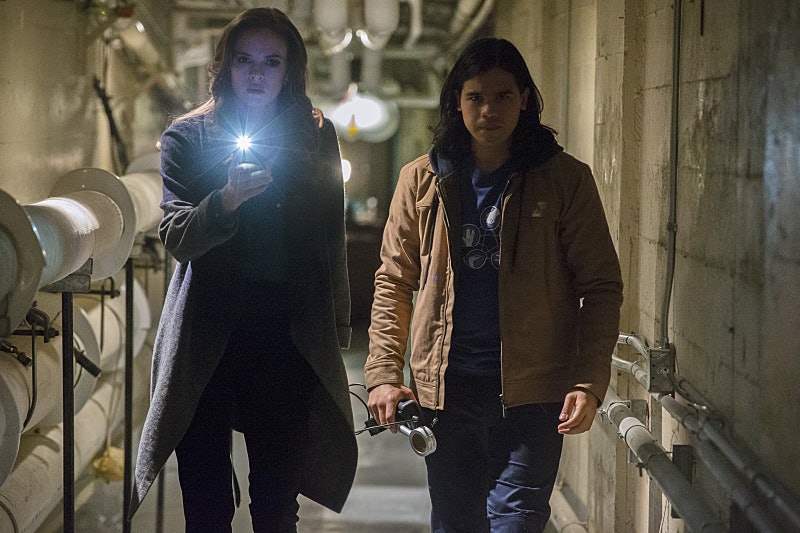 While Barry Allen might be the star of The Flash , S.T.A.R. Lab's resident techs, Cisco Ramon and Caitlin Snow, routinely steal the show right out from underneath him. They're the two who have the best chemistry on the show, which is like a big sister/little brother relationship, and I'd watch an entire web mini-series just about the two of them (if The CW ever wants to make that, I'm game). And while we unanimously love them lots, we've got to be question why Cisco and Caitlin continue to work with Harrison Wells. He's maybe a bad guy, definitely mysterious, and possibly from the future. So, what gives?

While he was once prominent and respected within the scientific community, lately Wells has fallen on hard times in more ways than one. It's all because of that particle accelerator that malfunctioned; sure, science projects go haywire all the time, but this one exploded and left five people dead. Wells will never be able to forget their names, as he reminded us a few episodes back, and he appears to be haunted by his past actions — well, at least we think he's haunted. Maybe. He's a guy with a lot of secrets and we know like -5 of them right now.

Knowing all of this, could Cisco and Caitlin be in cahoots with him? Do they have secret lairs in S.T.A.R. Labs too?

Oh no, I think it's quite the opposite. The answer is likely pretty simple: they still admire, and believe in, his work — which to the two scientists, still appears to be good.

It's obviously a much harder situation for Caitlin, since the explosion killed her fiancé, Ronnie (even though we know that he's not really dead, he's just a metahuman). So for her to willingly return back to S.T.A.R. Labs every single day, to be in the same spot where she lots her fiancé, it's got to take a little bit of a personal hit to her — but one that she can weather since she knows she's still working towards a greater good, which is now helping Barry in Central City. As far as Caitlin and Cisco know, Wells is a good guy. We, as the audience, are the only ones who have been really clued into his strange ulterior motives. Cisco and Caitlin are simply thinking about the science.

It's really kind of a situation like, if you got the chance to work with your hero, what kind of actions would cause you to desert them? If Tina Fey asked me to come and work with her at 30 Rock and then Tina Fey accidentally burned 30 Rock to the ground heating up some night cheese, would I suddenly abandon all that Tina Fey stands for because of this one little blunder? Hell no. While Wells' supposed mistake is on a far greater (and possibly darker) scale, Cisco and Caitlin are still going to stand by him, just like me & Tina Fey.

So while we might question Wells' motives, we shouldn't be questioning those of Caitlin and Cisco. They're all science, all the time.