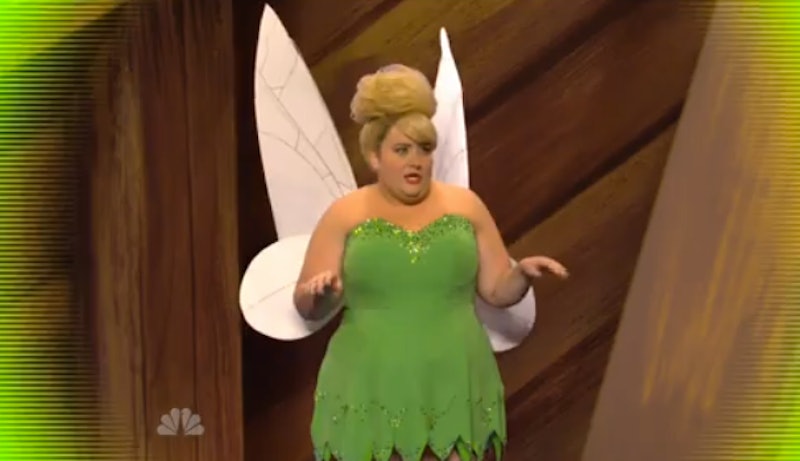 Aidy Bryant, wonderful, hilarious creature that she is, made the world a little more #blessed tonight on Saturday Night Live thanks to her glorious decision to bring back the one and only Tonkerbell for a parody of NBC's 'Peter Pan Live!' special/professional train wreck/GIF treasure trove. The fact that we got to see the return of Tinkerbell's badass, full o' swag sister Tonkerbell on SNL is almost enough of a reason to forgive Marnie Michaels for her performance. ALMOST. Still though, this skit was pitch-perfect in every possible way.

Tonk was joined by Cecily Strong as Peter Pan, who couldn't stop remarking on her 'shapely boy legs' and feminine features (lol), and host James Franco, who slayed as an absolutely hilarious Christopher Walken playing Hook (like, SLAYED). Tonkerbell was quick to point out that “With that make-up, you look like a geisha,” when Franco-Hook sauntered into the scene, and later on called him out for his horrendous singing skills (“Even though you’ve only got one hand, you should still be able to carry a tune!"), making sure to add her signature burn: You just got Tonk'd!

Hold on a second. Is that the sound of J.M. Barrie rolling over in his grave for the second time this week? Oops.

Maybe next year NBC can do "Tonk: The Tonkerbell Musical!" instead? Something tells me it would fare a liiiiiitle bit better. Check out the rest of the SNL cast Peter Pan-ified below!

More like this
‘SNL’ Finally Spoofed Nicole Kidman’s Weirdly Beloved AMC Ad & Nailed It
By Stephanie Topacio Long
Dan Levy Appears In The Latest Teaser For The Weeknd's HBO Series, 'The Idol'
By Jake Viswanath
Jason Derulo Is Launching A New Singing Show In The UK
By Maxine Harrison
Everything To Know About Taylor Swift’s 10th Studio Album, 'Midnights'
By Grace Wehniainen and Jake Viswanath
Get Even More From Bustle — Sign Up For The Newsletter