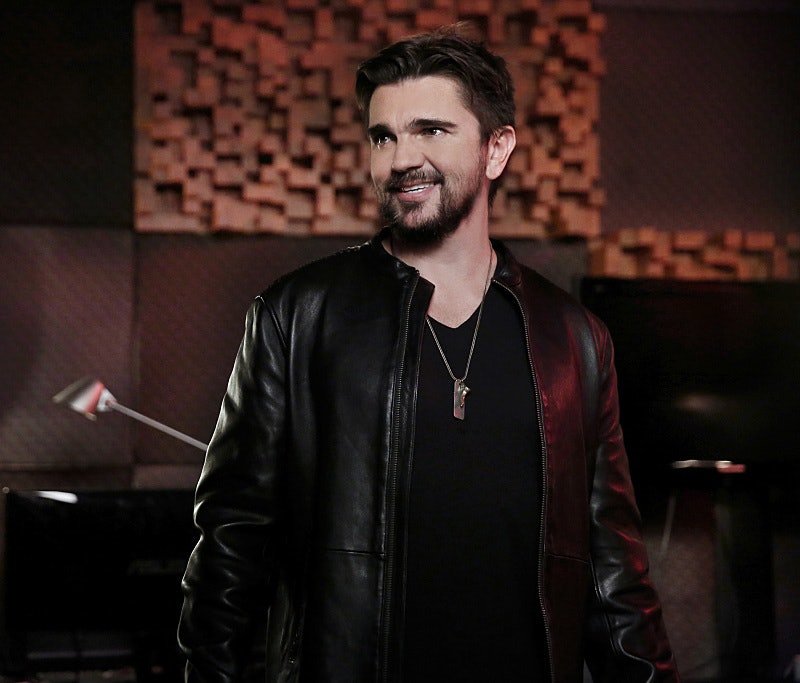 If you aren't already familiar with Juanes, get ready, because I'm giving you a much overdue crash course. Juanes, who will be guest starring on Jane the Virgin on Monday night, is a supernova-level popular Colombian musician who you might recognize from his six albums, recent appearance at Jay Z's Made in America concert, and 2013 memoir, Chasing the Sun. Oh, and the two Grammys he's won. Of course, those are only a small fraction of his full collection of awards, which also includes 20 (yes, 20!) Latin Grammys and nine MTV Awards. He's quite the decorated performer, and now he can add "Jane the Virgin guest star" as a feather in his metaphorical cap.

In a September interview with The Huffington Post, he admitted that his Jane the Virgin appearance would — rather appropriately, I might add — be his "first time" acting in a guest role (barring "something small in Mexico" he did once). He added that the gig was rather serendipitous, as apparently the Jane producers approached him first for his music. They used his hit song "Una Flor," (a song with over one million hits on YouTube/the third single on his most recent, already-platinum album, Loco De Amor) in the series' pilot. And when they got permission to use his music, I suppose they decided to kill two birds with one stone and added that he was welcome to appear on the show if he wanted to. Even though Juanes specifically noted that he doesn't think of himself as an actor (according to him, his "thing is music"), he took the role because he thought it would be fun.

I'm sure it was, because according to Entertainment Weekly, he'll be playing a "smooth-talking ladies’ man who considers producing a demo record for Jane’s pop-music obsessed mother Xiomara." I think (given the show's trademark soapiness) he'll be getting in on Jane the Virgin's increasingly tangled love triangles and jealousy webs. We can also safely bet on the fact that he'll be giving the ever-envious Rogelio some competition, and honestly, I don't think it gets more fun than that.

But hey, it's certainly a two-way street — and even as Juanes lives it up as a sexy record producer who toys with Xiomara's heart, he's definitely a big get for the show's producers. According to Latin Heat, co-executive producer Ben Silverman said, "It is an honor and a privilege to be working with Juanes on this genre re-defining series," citing the show's mission to "provide a voice to the traditionally underserved Hispanic audience in the US." With that in mind, I think congratulations are in order all around!

More like this
18 Years After 'American' Idol, Jennifer Hudson & Simon Cowell Reunited On Her Talk Show
By Radhika Menon
'School Of Rock' Changed Joe Keery's Life Forever
By Alyssa Lapid
'Rap Sh!t' Season 2 Is Officially Happening & Will Include "More Seducing & Scheming"
By Brad Witter and Grace Wehniainen
Ramin Djawadi Is Living Out His Dreams
By Rebecca Long
Get Even More From Bustle — Sign Up For The Newsletter