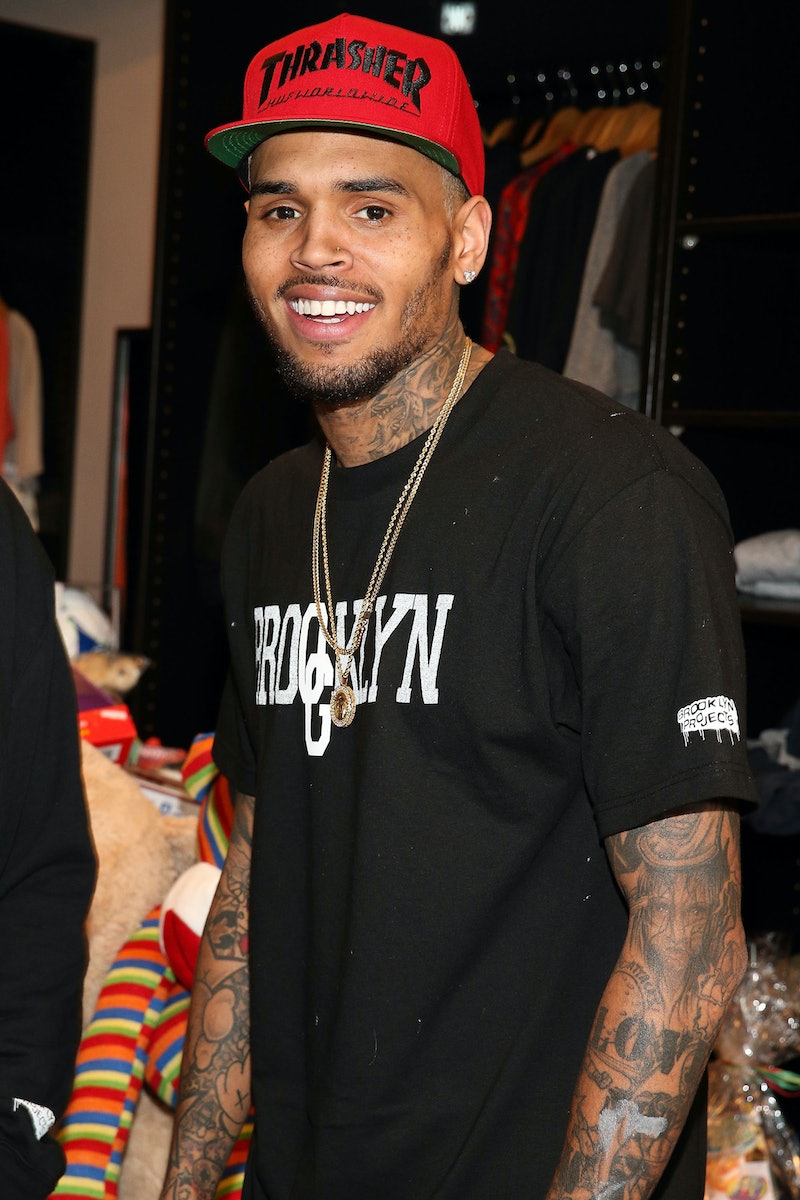 Another day, another diss posted (and then deleted) by Chris Brown on Instagram. This time it was at the expense of his ex-girlfriend Karrueche Tran. Not helping the never-ending Chris Brown and Drake feud, Brown accused Tran of cheating with the "Hold On, We're Going Home" rapper. Yup, Brown claims Drizzy stole his girl while he was away in jail. Before we even get to that, I'd like to point out that this whole mess started at a Christmas concert. 'Tis the season for drama, huh? Let's recap what happened.

On Friday, Chris Brown performed at Power 106's Cali Christmas and asked if there were any single ladies in the audience. He then told the crowd, "Well, I’m single, too. F--- that bitch." Really?! Is that appropriate language for a holiday concert? Doesn't sound very festive to me. Anyway, if you're familiar with Brown's love life, you'd know he was referring to Tran. After news spread that this on-again off-again couple is officially off, Karrueche Tran explained the Chris Brown break-up by posting a photo on Instagram on Saturday. Instead of handling the situation as immaturely as Brown, she responded in the best possible way.

Tran took the high road and shared an empowering message that resonates with anyone who's been in a troubling relationship. She shared the quote "When something bad happens, you can either let it define you, let it destory you or let it strenghten you. The choice is yours." That in itself is an adequate response, but it's in the caption where she makes it clear she chooses the latter option: letting it strengthen her.

While you can read the full caption above, this excerpt is the most powerful:

I refuse to be repeatedly mistreated especially by someone who claims to love me. That's not love. And if that's what you define as love then I don't want it... If you can't love me the right way, then don't love me at all.

As for Brown, it's like he inadvertently proved Tran's point. Showing how little respect he has for her, he responded with an even more insulting post on his own Insta account. In the caption of a since-deleted image, Chris Brown called Karrueche a cheater. According to a screenshot posted on MTV.com, part of the caption said:

I was locked up for damn near 4 months and only got 1 visit from you while u was hosting parties and taking secret trips to Toronto, going on dates with Drake! When this relationship first started u knew what it was and even participated in threesomes. I slowed all that shit down. So let's not try to save face for public opinion because I don't need to play victim so people can take my side.

This is problematic for a variety of reasons. Not only is it extremely immature to call someone out on social media for cheating (looking at you, Rob Kardashian! No one will ever forget his "Rita Whora" tweets), but it's a conversation that could and should be held in private, face-to-face. Why slander someone's reputation in the spotlight, when it may not even be true in the first place? Plus, for Brown to mention intimate details of their relationship is just low. And saying Tran is playing a victim? Ugh, that makes the whole thing even worse.

While this mess sounds like an Instagram-induced headache, it proves why it's for the best that their relationship ended. If anything, Tran's message is uplifting, whereas Brown's shows he needs to grow up and learn a thing or two about how to respect women. In fact, he should probably start on that ASAP!

More like this
Who Is Nick Cannon Dating & How Many Kids Does He Have?
By Jordyn Tilchen and Radhika Menon
The 'Love Island' Wedding Mystery That No One Saw Coming
By Darshita Goyal
Kelly Mi Li Teased A Mysterious New Boyfriend In 'Bling Empire' Season 3
By Brad Witter
Kevin Kreider Finally Asked Out Kim Lee On 'Bling Empire'
By Brad Witter
Get Even More From Bustle — Sign Up For The Newsletter