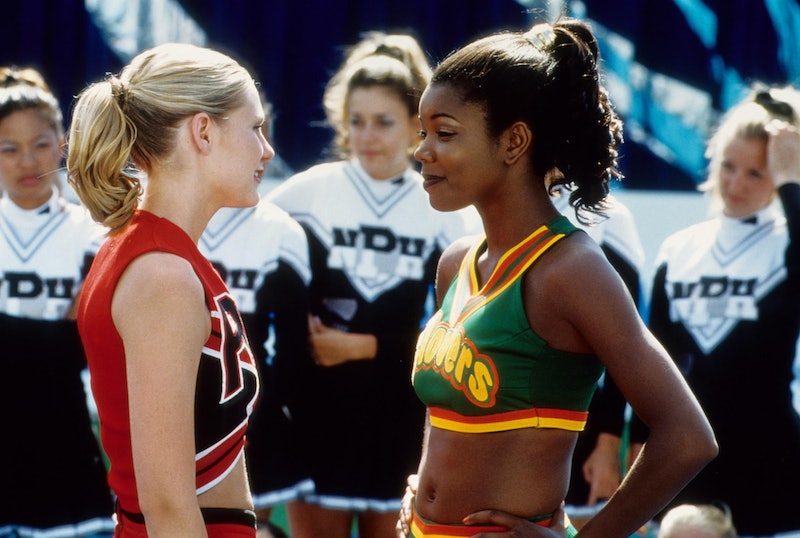 If you were a teenager in the early 2000s, there was one movie that totally defined your adolescence: Bring It On. Even if you were too young to fully appreciate it then (and all the jokes flew right over your head), few can argue it was anything short of a spectacular movie. It had basically everything you'd want in a chick flick: Romance, sick cheer routines, and funny, quotable moments that made you wish your friends were as witty as the Racho Carne Toros. Fortunately, Gabrielle Union loves Bring It On as much as the rest of us do — so much, that she's not willing to give up the cheer uniform that helped made her famous.

And although she eventually grew up to star in Being Mary Jane and marry famed NBA player Dwyane Wade (who she has the most adorable relationship ever), one of her earliest movie roles as Isis, the captain of the Compton High School Clovers, still holds a special place in her heart. In a recent interview with Us Magazine, she revealed that she had her own copy of her famous green Clovers uniform made just because she loves the movie so much.

"I had a replica made. Just for fun... or not. We would always be all together... Toros, Clovers. We had a lot of fun, and we continue to have a lot of fun together whenever we're all together. It's a movie and a gift and a friendship that keeps on giving."

OK, but how adorable is that? It's refreshing to hear that Union (and the rest of the cast) have such fond memories of the movie — which was released over 14 years ago, if you want to feel super old. A lot of actors will talk about how cringeworthy their early roles were, but since this was a movie that was so loved, I'm happy to hear that the cast feels the same way.

And I totally wouldn't be opposed to a Bring It On reunion — especially if it means bringing the cast together for a new movie. Might I suggest Union's Isis and Kirsten Dunst's Torrance as adult professional cheer captains who meet again when their teams compete against each other. Obviously, Jesse Bradford and Eliza Dushku will need to make a return as well. And after all, I think we're owed something to help erase the memory of the terrible Bring It On sequels we've been plagued with in the years since the movie was released.

In the meantime, I'm putting in a request for Union to sport her uniform next Halloween, if not sooner. I'm going to need to pictures to help keep the hope alive that someday we can get a new Bring It On movie that doesn't suck.

Also on my wish list: An exact recreation of this scene, please and thank you.