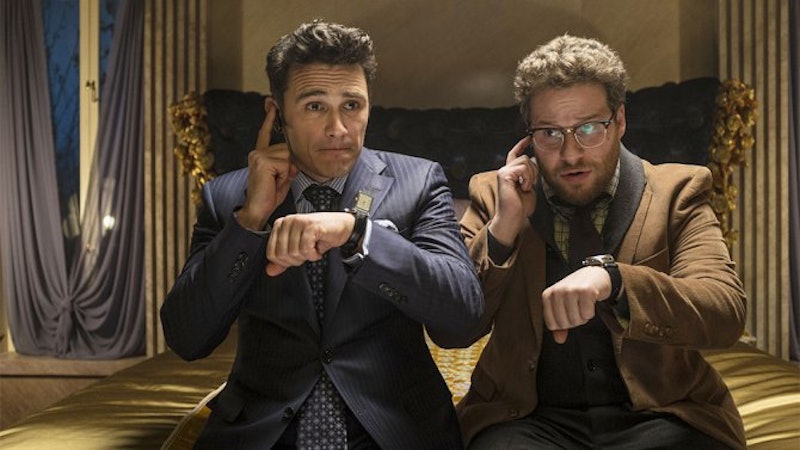 You know that Sony Pictures hacking situation? It's a way bigger mess than originally anticipated. Of course, it was a pretty big deal when hackers leaked a series of upcoming releases like Fury and Annie over the Thanksgiving weekend, plus confidential information like how much money Seth Rogen and James Franco made for The Interview, but the aftermath is proving itself to be just as complicated to deal with. Last week, an investigation was launched by the FBI and the Department of Homeland Security to find out whether or not North Korea was the culprit, but now, a North Korea government official has released a statement stating their innocence.

If you're a bit confused about why North Korea would want to hack into Sony, let me get you up to speed. In The Interview, Rogen and Franco play journalists sent to take down North Korea's supreme leader, Kim Jong-Un, and unsurprisingly, Jong-Un isn't a huge fan of the idea. For that reason, it wouldn't be super shocking if North Korean hackers were sent to take down Sony before the movie hits theaters, but at this point, they swear they had nothing to do with it. According to an anonymous spokesperson from North Korea's National Defense Commission:

The SONY Pictures, a film producer in the U.S., has reportedly been attacked by hackers. The hacking is so fatal that all the systems of the company have been paralyzed, causing the overall suspension of the work and supposedly a huge ensuing loss. Much upset by this, the U.S. mobilized many investigation bodies including FBI, CIA and the Department of Homeland Security for urgent investigation and recovery of the system. We do not know where in America the SONY Pictures is situated and for what wrongdoings it became the target of the attack nor we feel the need to know about it.

But wait, it gets better. Although North Korea claims to have had nothing to do with it, they're ready to assert that Sony totally had it coming because they were releasing a movie that's responsible for a "betting a terrorist act while hurting the dignity of the supreme leadership of the DPRK [Democratic People's Republic of Korea] by taking advantage of the hostile policy of the U.S. administration towards the DPRK."

The statement goes on to call the hacking "a righteous deed," and that "the righteous reaction will get stronger to smash the wrongdoings." This statement comes after some Sony employees received threatening emails on Friday, which warns that the hacking is only the first part of a bigger plan. Shaking in your boots yet? Yeah, me either.