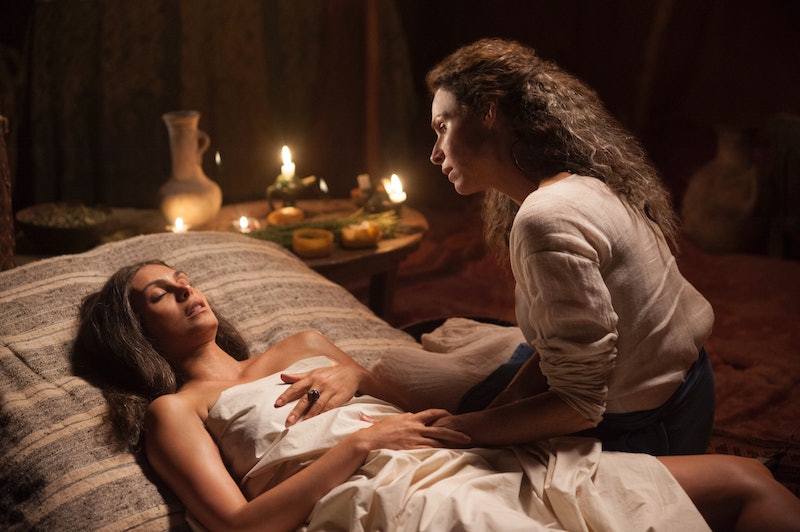 It takes a lot of chutzpah to rewrite the Bible, and author Anita Diamant did exactly that with The Red Tent. However she didn't stop with just a basic edit. By privileging her female characters' points of view, she completely altered some of the Old Testament's best known figures and events. Doing so earned the novelist a spot on the New York Times Bestseller List and a reputation as one of the most celebrated feminist writers today. For her latest project, she co-wrote the script for the Lifetime miniseries based on The Red Tent, a two-night event that began on Dec. 7. But what else should you know about Diamant?

For starters, The Red Tent was her very first novel. That's quite an opening act. It's gotta feel pretty good to see the characters she created back in 1997 being portrayed by great actresses like Rebecca Ferguson, Minnie Driver, and Morena Baccarin. So far, The Red Tent is Diamant's only work to be adapted for the screen, but several of her other books would make excellent miniseries as well. The author has become known for creating large ensembles of characters within her stories, then switching effortlessly back and forth between their distinct points of view. It's an ideal style to adapt for a television show or miniseries (which you'll know if you've ever watched Game of Thrones). So don't be surprised when you see more of Diamant's work headed to Hollywood. For now, let's get to know the woman behind these strong characters.

She Just Published Her Fifth Novel

Remember, The Red Tent may be Diamant's best-known book, but it was also just her opening act. Since its publication, the author has gone on to write four more books, most of them centered around women and their struggles, both psychological and external. Her latest work, The Boston Girl, sets up the same dynamic. The main character Addie tells the story of her life, which encompasses much of the twentieth century and the thus the swiftly changing opportunities for American women. This one is definitely a good holiday present for the women in your life. And if it ends up on your own shelf, well, I won't blame you.

Her Culture is Important to Her

Diamant is Jewish, and many of her stories and characters (including The Red Tent) deal with the intersection of Judaism, womanhood, and feminism. Even before beginning her career in fiction, she wrote nonfiction books about Jewish life and culture with a feminist bent, including The New Jewish Wedding and How to Be a Jewish Parent. She's also spoken many times on the importance of empowering women within her religion and community. Can I get an amen?