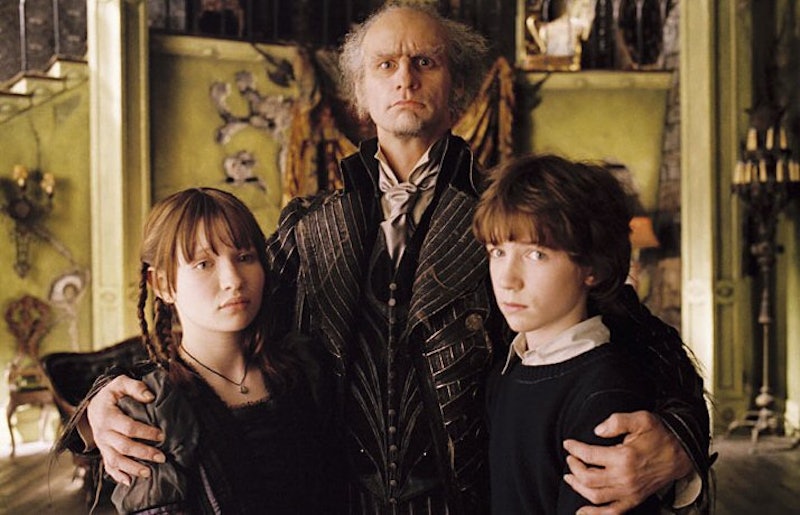 I was so excited to find out about the A Series Of Unfortunate Events miniseries coming to Netflix. I've been waiting for something like this for ten years, since the Lemony Snicket's A Series Of Unfortunate Events movie was released. No, it wasn't completely terrible. There were some funny moments and some beautiful ones, but most fans of Snicket's series were disappointed by the film adaptation, perhaps because it tried to encompass so much in one film.

Instead of trying to cram the first three books into one movie, I hope that the miniseries can linger on the various plot points that the movie had to skim over. I also hope that it doesn't shy away from the darkness. Macabre children's films have an undeniable appeal; just think of the success of movies like Coraline and ParaNorman, or of Tim Burton's children's films. A Series Of Unfortunate Events was pretty dark, but it certainly appealed to me as a child. I loved the erie humor of Snicket's tone, and I found the lack of responsible adults in the books a little frightening, a little thrilling. Here are some things I hope the new miniseries will include that the movie did not.

Jim Carey was hilarious as the antagonist Olaf, but he lacked the menace of the character in the books. Any adaptation of the series should make Olaf a believable villain, as he looms large throughout the series.

An Honest Portrayal Of Death

For me, and many other children, this series was a crash course in loss. The movie steered away from this, perhaps because it's easier to read about a woman being pushed into a lake full of flesh-eating leeches than to see it. But death is an integral part of the books, and one that the miniseries shouldn't shy away from.

I remember The Bad Beginning talking about grappling hooks for a really long time, making me realize that I needed a grappling hook badly. But the movie was grappling hook-free. This needs to be fixed.

The fact that Sunny's talent became cooking as she grew up is absolutely adorable. I hope that we get to see a culinary toddler in the miniseries.

It's probably not a great sign if your favorite part of the movie is its end credits. But they were so nice. Even though the upcoming miniseries is going to be live action, rather than stop motion, I'd love to see more of that dark Tim Burton-esque style in the mini series.

Though the movie obviously couldn't (and for good reason) incorporate all thirteen books in the series, I'm hoping the miniseries will be able to include a lot of the other books, including my favorite, The Ersatz Elevator, which featured the indulgently evil Esmé and Jerome Squalor and taught me what "ersatz" meant.

Probably to better appeal to its audience, the movie tried to manufacture an amount of closure in the end of its film, something that is absent in the books. I hope that the miniseries doesn't force a neat and happy ending, though I'm a little worried, as it has been billed as a family series. Hopefully, with Snicket (AKA Daniel Handler) and Netflix on board, the miniseries will be in good hands.

More like this
These 25 International Horror Movies On Netflix Prove Fear Is A Universal Language
By Bustle Editors
The Most Anticipated Books Of October 2022
By K.W. Colyard
For Mur Lafferty, Genre Is Everything
By K.W. Colyard
'Firefly Lane' Season 2 Will Be The Show's Last — But There's A Twist
By K.W. Colyard and Grace Wehniainen
Get Even More From Bustle — Sign Up For The Newsletter