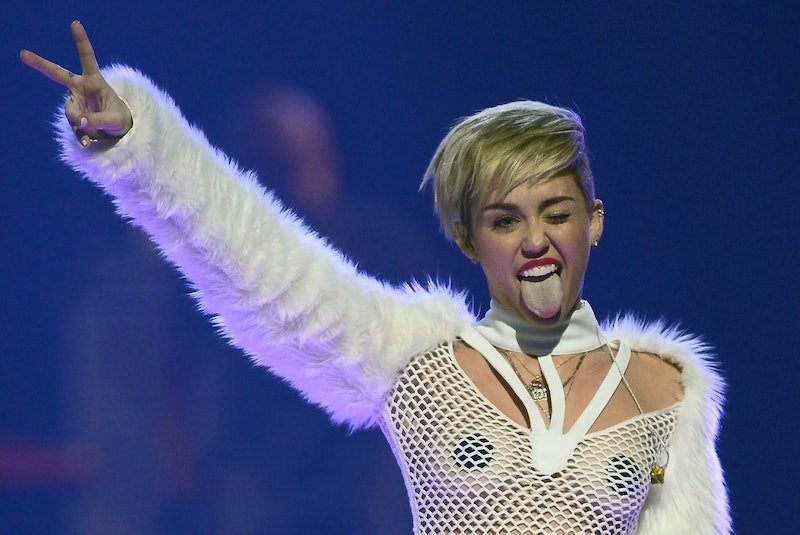 Love or hate Miley Cyrus, she's unabashedly herself — from her wardrobe to her lyrics, she doesn't care what anyone thinks. As her best friend Lesley told us years ago, "She's just being Miley." But one thing that Cyrus isn't? She's not a bad influence. I know you may have to reread that sentence a few times before letting it sink in, but believe me, there's proof. Despite those who assume Cyrus is corrupting the son of Arnold Schwarzenegger and Maria Shriver (aka her new boyfriend Patrick Schwarzenegger), he's actually the one with a party-boy history. TMZ reports that Miley Cyrus' boyfriend Patrick Schwarzenegger was visiting nightclubs, hanging out at strip clubs, and smoking weed long before he met the 22-year-old singer. According to the site:

As for reports that Miley is corrupting Patrick, we're told members of his family are laughing ... they've known about his hard partying and actually think it's good he now has girlfriend who might slow him down.

Hmm, that definitely changes things, huh? Then again, maybe it's not that shocking. Cyrus may do things for shock value, but she also has a good head on her shoulders. (An example of that was when she used her VMA spotlight to focus of homeless teens, regardless of how that played out later on.) Essentially she wreaks havoc, but she's not reckless. This could be a good thing when it comes to her new relationship. I really think these two could really balance each other out.

Plus, it's not like they're always hanging out in nightclubs. Wasn't their casual football game date proof that these two aren't always out-of-control? They can have low-key dates too, thank you very much. On Friday, they were spotted riding a jet-ski together, which is adorable. Sure, it may seem a bit adventurous, but it's nothing scandalous. If anything, it shows there are multiple ways these two can have fun — and no, it doesn't always involve partying.

Further proving this point, on Saturday, Schwarzenegger shared an Instagram of them hanging around in Nashville. Although there isn't a campfire in site, the setting makes it seem like a group of friends casually hanging out and keeping warm. Nothing crazy going on there! The only thing seemingly surprising is whether that's Cody Simpson sitting next to them. Are they friends, or does he have an identical twin brother no one told me about?

Besides that, I'd like to point out that Schwarzenegger doesn't even seem like that terrible of an influence himself. A quick glimpse at his Instagram shows him serving the homeless on Thanksgiving, and frequently posting precious photos with his mom. Wow, how wild!

See? They may know how to have fun, but they also have big hearts. Both of them make an effort to give back and help others. Now can't we all stop questioning their relationship and be happy that Miley Cyrus found a new guy? After all, these two seem like a perfect match.