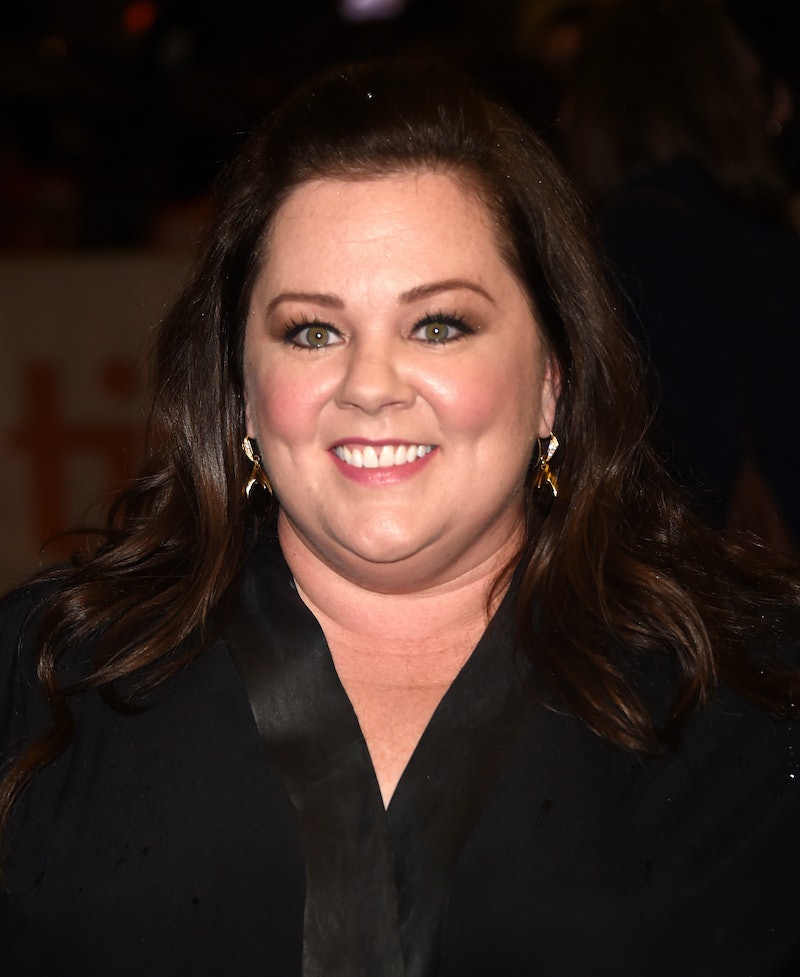 Isn't it a little weird that Melissa McCarthy is a huge movie star — and yet you still get to see her on TV for free every week? Her show, Mike and Molly , returns for its fifth season on Dec. 8, and even though the season will be a full 22 episodes, she's had enough time to film several movies that will be coming out before Mike and Molly Season 6. So don't worry, there are plenty of Melissa McCarthy movies coming out in 2015 to look forward to.

She also has some projects that are still in the early stages — just a few weeks ago Deadline reported that McCarthy will play Tinkerbell in FOX's Peter Pan movie, which will be written and directed by Shawn Levy and Nicolas Stoller. It's an action-adventure-comedy where Tinkerbell is the star, but there aren't many other details available yet. And there's Just Do It , a comedy about a couple who uses 100 days of continuous sex to repair their relationship, which is currently in development at her new production company.

And she's also branching out from acting and starting a plus-sized clothing line. McCarthy is already one of the busiest actresses working, and she's finding even more ways to take over the earth. Trust me, there will be no shortage of places to see Melissa McCarthy.

Almost every year, McCarthy works with Paul Feig, the director behind Bridesmaids and The Heat, and in 2015 their espionage comedy, currently titled Spy (though I wouldn't be surprised if that changed… it's a pretty uninspired title) will be released Memorial Day weekend. It costars Jude Law and no doubt will have McCarthy taking her Feig-perfected schtick to a 007 type of spy agency.

McCarthy is returning to her Kim Possible roots and doing voiceover for an upcoming children's movie from DreamWorks. Seth Rogen and McCarthy voice two slacker, oddball ghosts who work in the F.B.I. for ghosts — the B.O.O.: Bureau of Otherworldly Operations.

This one might not make it in 2015, but it's McCarthy's next collaboration with her husband, Ben Falcone. Falcone and McCarthy made Tammy this summer, and they've got another female name picked out for their followup: Michelle Darnell. Roger Ebert might have believed funny names are never funny, but as a certified non-genius I declare this one to be perfectly chosen. While Tammy was pretty dire, I have high hopes for this one thanks to the premise, which takes Martha Stewart's jail stint and mixes it with Dr. Phil's public persona. My fingers are crossed that Falcone and McCarthy reuniting will deliver on its promise.

More like this
Here’s Everything Coming To & Leaving Netflix In October
By Jake Viswanath
What’s New On Netflix: Ana De Armas’ 'Blonde' & A Nick Kroll Special
By Arya Roshanian
At 14, Jurnee Smollett Was Taking Meetings With Missy Elliot & Lauryn Hill
By Chloe Foussianes
Paul Mescal, Man Of Mystery
By Samantha Leach and Heather Hazzan
Get Even More From Bustle — Sign Up For The Newsletter