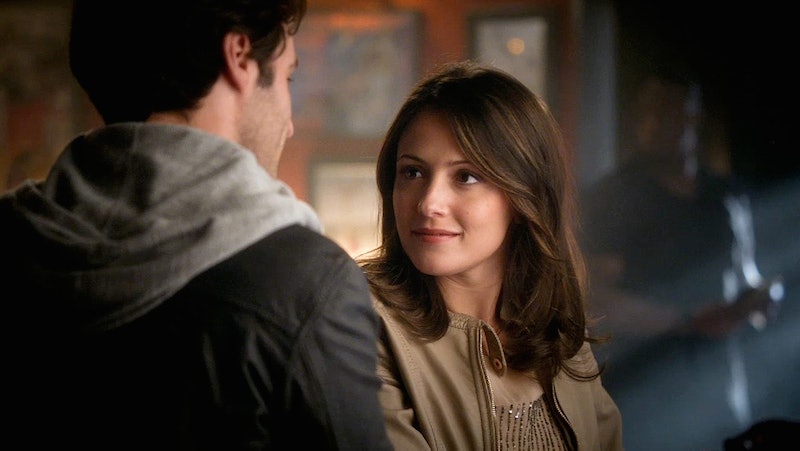 When we last saw April, she was undergoing her first bout of chemo—not exactly a barrel of laughs. To make her situation even worse, Dominic dumped her. Not cool man. Give our girl a chance! To complete this trifecta of disaster, at the end of the midseason finale April found out that Leo's cancer could have worsened. After a day like that, anyone could use a break. But it's been four months since the most recent episode aired, so I think we're all due for an update. To make sure you don't miss a moment, here's how to watch Chasing Life 's Christmas special online. Make sure to keep some tissues handy, because any holiday set in a hospital is sure to be a tearjerker.

The episode is titled "Locks of Love," which gives us a hint as to what April might go through in the show. Will she lose her hair because of the chemo? In the promo, she is wearing a suspicious number of Santa hats. This is a pivotal moment in any cancer drama — again, do not turn on your TV until you have a box of Kleenex handy. Though honestly, until April finds out what's going on with Leo, I doubt she'll be worrying about her hair. Check out the promo below:

If you can't contain your curiosity, videos on YouTube have promotional photos for the episode, so you'll be able to at least get a tease about Leo's fate — and the fate of April's hair. But, to remain spoiler-free, you'll have to catch the full episode when it airs Dec. 9. As to where to watch online, I've got a few suggestions if you can't get to your TV during the broadcast.

If you are a cable subscriber (which you most likely are if you watch Chasing Life on your TV), you can just sign in on ABCFamily.com and watch a live stream of their programming. Pretty cool, right? Even if you're away from home, you can still download the ABCFamily app and then watch on your mobile device.

As with the previous option, if you have a cable ID, you can log into Hulu's site and watch the episode from there. There's no live stream, however, so you're gonna have to wait until after "Locks of Love" airs to watch. Avoid spoilers at all costs!

If you don't have a cable subscription, buying the Christmas special is your best bet. Each episode of Chasing Life costs $1.99 at the Google Play store, or you can get the whole first season for $28.99. For now, it's cheaper to buy the episodes piecemeal, but since Season 1 is scheduled for a total of 21 episodes including the special, it makes financial sense in the long run to download the entire season. See, that purchase is totally justified!

If you're partial to Apple devices, you can also buy episodes of Chasing Life from iTunes. However, Apple's price are significantly steeper than Google's. Just downloading the special costs $2.99, and the entire first season will run you $44.99, or way more than the eventual DVD release. Sorry, Steve Jobs fans!