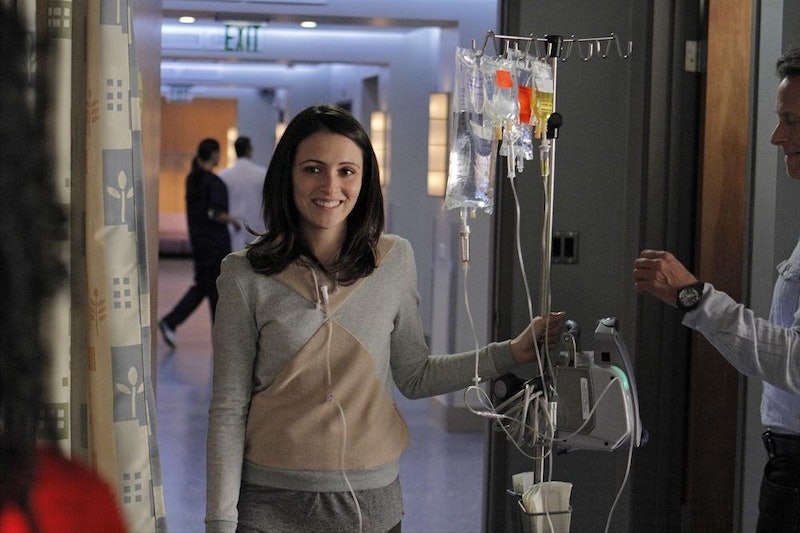 ABC Family is no stranger to the joyous season. From its beloved 25 Days of Christmas to its series' being turned into holiday-filled specials, the network is all about spreading joy, like with the new series that has captured the hearts of so many — Chasing Life Season 1 . Starring Italia Ricci and Scott Michael Foster (among many other talented people), the show follows the life of 24-year-old journalist April Carver (Ricci) and her journey as she battles the hideous disease that is cancer. Some might have been hesitant about tuning in to a show revolving around a deadly illness; after all, the story line has the potential of being a total downer. However, there's something special, significant, and uplifting about the show that is all about chasing dreams, love, and, of course, life.

Currently in its first season, with the second half airing sometime January 2015 (and Chasing Life will also return for a second season!), the drama is coming back to its fans for a holiday special titled "Locks of Love" on Tuesday, Dec. 9 at 9 p.m. ET. Seeing as it's almost four months since we last saw April, you might have a hard time remembering what happened throughout Season 1A. With that said, here's a brief recap to refresh your memory before the Christmas episode, which is sure to bring lots of smiles, hope, tears, and inspiration.

The midseason finale showed April entering the hospital for her first treatment of chemotherapy, where she must reside for an entire month, because that is required for her form of cancer aka AML (Acute Myeloid Leukemia). As expected, the chemo round brought up many emotions and hardships for April, like the end of her relationship with Dominic, the memory of her now deceased father, and help from her family and friends, including fellow cancer patient Leo. She pushes through, thanks to Leo, but much remains regarding April's time in the hospital, which we'll surely see during the holiday episode, the rest of Season 1, and throughout Season 2.

Sorry Dominic, but Leo is the man we're all rooting for — and not just because he's played by the ever-so-talented and beloved Foster. Like April, Leo is also battling cancer, but his is a brain tumor. He and April share both an emotional and physical bond. Yes, they did sleep together, but their relationship is much more than their feelings for one another. As we saw when Leo gave April that pep talk about how she can beat cancer, because she knows she's "supposed to live," he cares for her, and believes in her wholeheartedly. But does he believe in himself? At the end of the Season 1A finale, Leo left a message for April saying, "April, I have to tell you something really important." First, it's not fair to end an episode that way. Where is Leo? What does his message mean? Why are his parents at the hospital? Did he decide to go through with the surgery? So many questions, and not enough answers.

The Carvers know how to do family drama right. In between their everyday affairs and routines, April, Sara, Brenna, Uncle George, and their grandmother, are dealing with one big elephant in the room —Thomas' (April and Brenna's father) secret daughter. That's right, dear old daddy had an affair resulting in the birth of Natalie. As shocking as this reveal was, the real surprise came when we learned Sara's known all along about April and Brenna's half-sister. What else has she been hiding? In addition to Sara and George, who else has kept Natalie a secret? Despite Natalie not really wanting anything to do with the Carvers, I have no doubt she'll pop up to cause even more family drama.

Season 1 brought a lot of hookups, breakups, and full-fledged relationships. Where to begin? We already know April and Dominic are no longer a thing, for now, and that she and Leo totally need to get together. What about her sister Brenna? Anyone else love her relationship with Greer? Unfortunately, the two are now broken up, because of Greer's parents who found out that Brenna and Greer snuck away during their school trip in Miami to meet Natalie. Per Greer's parents, they managed to remove the "incident" from both girls' records by promising the school a new field house. With that said, Greer is no longer permitted to see Brenna, because they'd rather have their daughter date someone with "similar ambitions." As irritating as this situation was, at least we saw Sara stand up for Brenna by telling off Greer's parents and saying her daughter's mistakes will certainly make her into "one hell of an interesting woman." Lastly, in the relationship department, George and Sara have feelings for one another, but if anything will come of that remains unknown.

I, for one, can't wait for Chasing Life's return. This show hits the mark on so many levels.