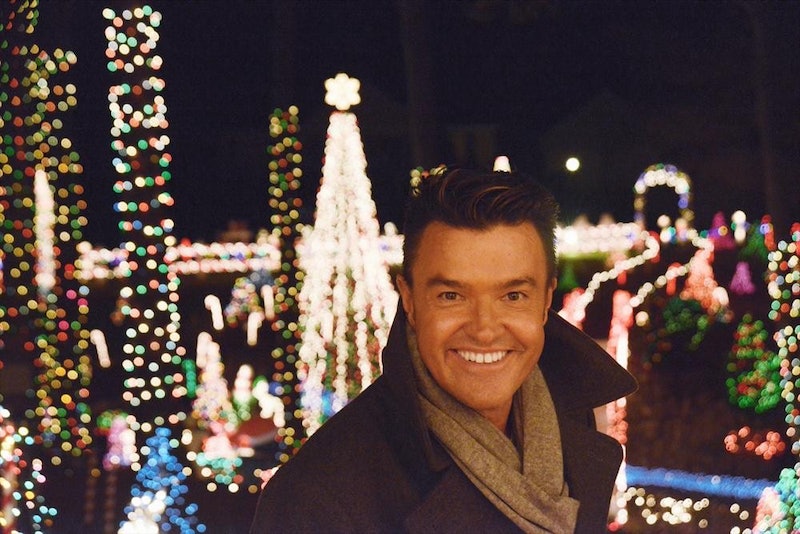 Christmas is a time of joy, but Christmas decorating is not for the faint of heart — and the families who participate in the The Great Christmas Light Fight know that all too well. The ABC show returns for its second season on Dec. 8 at 8 p.m. and host Michael Moloney is back. He will take turns with cohost Sabrina Soto in judging the most outrageous and elaborate Christmas lights. All of the people who participate are families from around the U.S. and each episode features four families competing for a $50,000 prize. Anyone who has experienced the agony of putting up outdoor Christmas lights (particularly in the freezing cold) knows that this is no casual competition. So what makes Moloney qualified to host the "battle of the bulbs"? Turns out, his TV background makes him the ideal judge.

Before entering the TV world, Moloney had been in the fashion industry for 10 years and then opened two home decor stores — Le Garage and Maison Luxe — in the 1990s. According to TV Guide, Goldie Hawn and Candace Bergen shopped at his stores. His own home has been featured in magazines, including People. But he's probably most well-known for his role as a designer on Extreme Makeover: Home Edition.

So Moloney is no stranger to extreme homes and as he says in a preview for Season 2 of The Great Christmas Light Fight, the lights are "out of Christmas control."

So what else has this lovable and positive designer done?

If Christmas lights aren't really your thing, and you're more into the spookiness of Halloween, Moloney still has you covered. This October, ABC also did a one-time Halloween show called the The Great Halloween Fright Fight, which aired on Oct. 28. Soto and Moloney went around judging epic homes that were decorated for Halloween. As a person who loves Halloween, I'm excited that it looks like ABC will be keeping with this Halloween show. Plus, the winner of Fright Fight this year is close to where I live in N.H. and they donated all of their winnings to my local animal shelter!

As previously mentioned, Moloney's years on Extreme Makeover: Home Edition alongside Ty Pennington perfectly prepared him for his work on The Great Christmas Light Fight since he visits people's homes and interacts closely with their families. And he loved his time on Extreme Makeover. He told the Gay & Lesbian Times , "Working on [Extreme Makeover: Home Edition] has been the greatest blessing for me — going to work every day, making a difference in so many lives; not just the amazing families that we help but anyone who comes in contact with one of our builds." He was on ABC's feel-good show for nine seasons until it ended in January 2012.

Being Active in Anti-Bullying Campaigns

Extreme Makeover did a special episode about bullying for a family who lost their 11-year-old son after he killed himself due to bullying about his sexual orientation. Moloney wrote a blog for Huffington Post explaining how much the episode meant to him, particularly since he is part of the LGBT community. He also filmed an anti-bullying PSA.

All Over Your TV

Besides his more regular work, Moloney has made his rounds on television. He was a featured designer for Clean House (which was on the now-defunct Style Network). In addition, he has been a guest on Good Morning America, The View, Entertainment Tonight, and Access Hollywood. He was on Who Wants To Be a Millionaire for Extreme Makeover with Paige Hemmis (video above), Fashion Wrap on the TV Guide Channel with Joan and Melissa Rivers, and Extra as a special assignment correspondent.

So The Great Christmas Light Fight may only be on your TV for the next few weeks, but don't fret if you're a fan of Moloney, since he's bound to be around again once the holiday season ends.

More like this
15 Piping Hot Behind-The-Scenes Secrets From 'Great British Bake Off'
By Emily Dixon and Darshita Goyal
What’s New On Netflix: Ana De Armas’ 'Blonde' & A Nick Kroll Special
By Arya Roshanian
10 Stranger Things-Inspired Halloween Costumes For True Fans
By Emma Carey
Devon Diep From 'Bling Empire' Wrote A Song About Her “Second Chance At Love”
By Grace Wehniainen
Get Even More From Bustle — Sign Up For The Newsletter