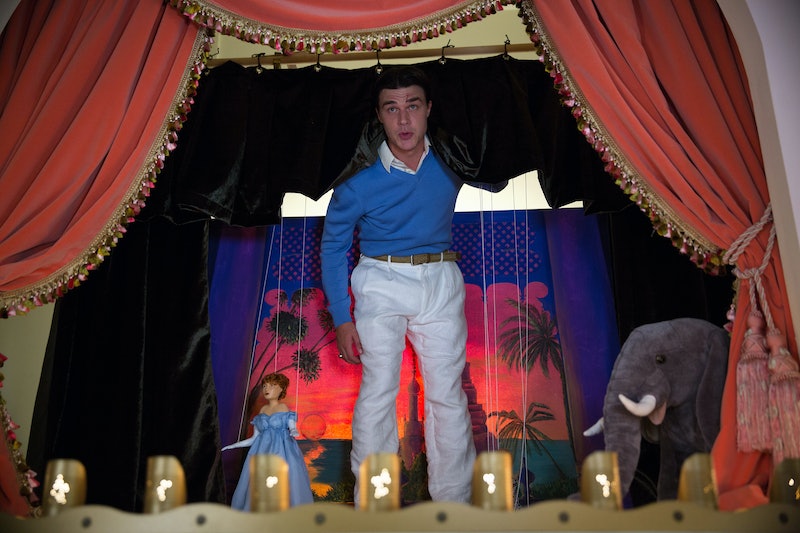 Oh, Dandy, you creepy son-of-a-murdered mother. This world-class psycho upped his game in American Horror Story: Freak Show's episode "Blood Bath" when he shot his own doting mother and bathed in her blood — so who will Dandy kill next? With only three more episodes left and the promo for the Dec. 10 episode "Tupperware Massacre Party" featuring lots of Dandy, it's safe to assume his killing days aren't over, but definitely numbered.

Actor Finn Wittrock (who I shudder at whenever I see him for a split second in the trailer for Unbroken) told E! about Dandy's next move: "I'll just tell you that the next [episode], I think his body count might double . . . The next one really, honestly takes the cake. Even I'm scared."

Now, Wittrock could be misleading us and Dandy himself actually dies in "Tupperware Massacre Party," but based on the promo video, I think he's going to deliver on his promise. Plus, I'd hate to see Dandy go without one last kill. (Really? Did I just say that?!) For as psychotic as Dandy is, he really doesn't have that large of a body count attributed to him, so doubling it wouldn't be that hard to do (if you're an efficient murderer like Dandy). Plus, the episode is called "Tupperware Massacre Party" and it looks like AHS is being quite literal with that title.

So here's everyone Dandy has killed and who might be next:

Dandy's first kill was his family's maid, Dora (portrayed by the epically fantastic Patti LaBelle). They had multiple confrontations and while I appreciated her fearlessness with dealing with Dandy, we kind of all saw this one coming — I just wish she had seen it coming too.

Dandy's second kill was the prostitute he picked up at the gay bar (bet you didn't remember that Matt Bomer's prostitute's name was Andy). Unfortunately, the only person who really cared about his disappearance was Dell, but since he's closeted, he's not going to launch a full-scale investigation on where Andy went. But kudos to Andy for making Dandy work at the kill — he did not die easily (and still managed to look good).

Last week's episode saw two shocking deaths — one of which Dandy was responsible for. Frances Conroy played his dysfunctional mother Gloria Mott to pure perfection and she will be sorely missed on the show (although she is responsible both for the messed up nature and nurture of Dandy). It appears Dandy will be using someone's dead body as a puppet in "Tupperware Massacre Party" and since he already bathed in her blood (who's going to clean that up?! He killed the maid!), I can't even begin to fathom if it will be her body or not.

There are many contenders for who Dandy may kill next. The safest to assume is the random housewives at the Tupperware party that he looks like he just drops in on. Of course, that will be disturbing, but we aren't emotionally invested in those people. So, that's the way Dandy will up his body count (like Wittrock hinted at) without killing too many main characters. There's also a potential for him to kill his faceless therapist since that's what led him to killing his mother.

Next, would be Gabourey Sidibe's character, Regina. She has visited the Mott household looking for her mother Dora and the preview also shows a confrontation between Regina and Dandy. Now it would be a waste to bring on Sidibe so briefly, just to kill her off. So I'm hoping Regina is part of Dandy's downfall and gets him caught.

The next rational (for an irrational person) group to target would be the freaks. If Dandy were to kill one of them (and it kind of feels like he should), there are a few options. Dandy loves Bette and Dot, but they did choose to leave him. Right now, they have been captured by Stanley (with the help of Elsa it looks like). The preview shows Stanley saying the conjoined twins escaped, so if they ran into Dandy (who also is shown at the freak show), what would happen? Would he kill them for leaving him? Or would he go after Stanley for capturing them? (Please, please let it be the latter. I'd love to see Dandy kill Stanley). Dandy does have a special place in his heart for the twins — and I'm sure he wouldn't like anyone else experimenting on them.

The other person who looks like they'd be in danger of Dandy is Jimmy. They've had multiple face-offs throughout the show, including when Dandy wanted to join the freak show, when Dandy was assisting Twisty in the woods, and when Jimmy came to Dandy's house to take Bette and Dot back to the freak show. Jimmy also knows that Dandy was in the woods and almost killed his beloved Maggie. Since Bette and Dot are missing, Jimmy naturally assumes that Dandy has them. We know that's not true, but could drunken Jimmy get himself killed by Dandy?

One person who is flying under the radar in all of this is Elsa. She appears to be helping Stanley with the twins and she killed Ethel. Maybe she deserves to die at Dandy's hands the most. But, I don't think we'll be getting that in the Dec. 10 episode. I just hope that Dandy focuses his efforts on killing the other villains in the show, but who am I kidding? It's called American Horror Story for a reason.