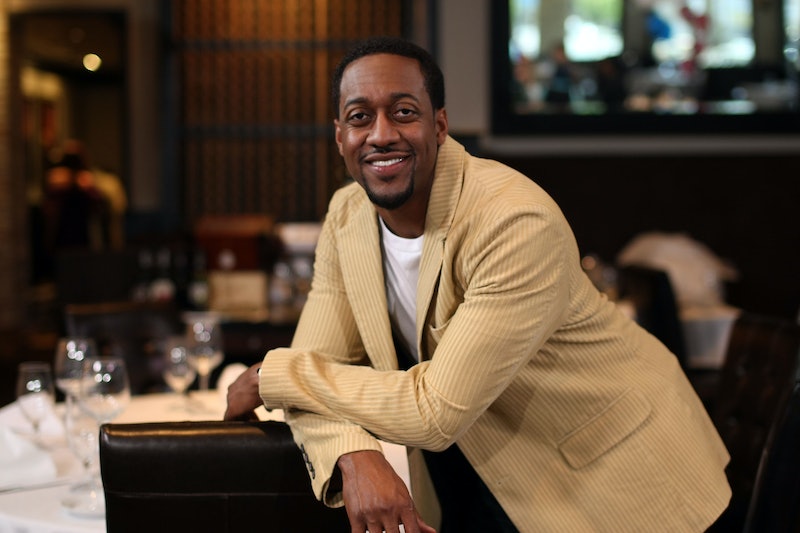 If you were a child of the '90s you know Jaleel White as the one and only Steve Urkel from Family Matters. He will be starring in Lifetime's The Santa Con (premiering Saturday, Dec. 13), but what has Jaleel White been up to since Urkel? Not surprisingly White told People magazine back in 2011 that he doesn't miss the role of Steve Urkel saying, "I'm not trying to get away from it or anything like that, but I don't miss the role at all — really." Unfortunately for White, he may never be able to shake being known as the super-nerd neighbor of the Winslow family, but he has been working on TV pretty steadily since.

Family Matters went off the air in 1998 after nine seasons. Steve was only supposed to be on one episode of the show (as a boy who had a crush on Laura), but he was such a breakout that he became one of the show's main characters (for better or for worse). And if all of this talk of Family Matters is getting your nostalgic for the 1990s, then watching The Santa Con should be a real treat for you. The Christmas movie not only stars White, but Barry Watson (7th Heaven) and Melissa Joan Hart (Clarissa Explains It All; Sabrina, the Teenage Witch) — Hart also directed the film. So the Lifetime film is a fabulous mash-up of stars of the greatest guilty TV pleasures of the '90s.

As annoying as Steve could be sometimes, White was pretty much a young comic genius. I mean, did you have a catchphrase on national television when you were a teenager? I didn't think so.

So let's look at what else White has been in since the '90s (and let me tell you, I had to resist every urge to use only Urkel gifs in the following section).

Although White hasn't recreated the success of his Family Matters days, he has still been around in small roles, mostly on the small screen. He's appeared on Psych (with Kenan Thompson), Boston Legal, House, CSI: Crime Scene Investigation, and most recently, Drunk History . He did have a starring role in the UPN show Grown Ups, but the show ended in 2000 after only one season. He had a a small part in the movie Dreamgirls — and he also has provided the voice of Sonic the Hedgehog for a TV series and a fan-made film. Additionally, he did a web series for Hulu called Fake It Til You Make It.

In 2012, White was paired with professional dancer Kym Johnson on the show Dancing with the Stars for Season 14. And Urkel had some serious moves (which we should have know since Stefan Urquelle had been so smooth). But he was voted off in week seven.

His Dancing with the Stars gig was not without drama. He allegedly blew up at his partner Johnson when he stepped on her toe and she reacted negatively, though he told People that the story was exaggerated. Although it does seem that some kind of altercation occurred, professional dancer Mark Ballas also said the story was exaggerated. But that's not the only scandalous story that White has had to deal with. In a more serious news event, his ex-girlfriend accused him of domestic violence against her, as reported by People. White has denied all of her accusations and though the pair is no longer dating, they do have a daughter together.

White hosted the reality competition show Total Blackout on Syfy. The show revolved around people having to identify objects in complete darkness with White providing narration. The show lasted for two seasons in 2012 and 2013, and there were actually some pretty hilarious moments.

With The Santa Con, White is back in the spotlight and told HuffPost Live that he will be directing a film he wrote next year. So, the reign of Urkel may not be over after all.

More like this
Netflix Reveals First Look At Wednesday In The 'Addams Family' Spinoff Series
By Bustle Editors
The Best 'Grey's Anatomy' Intern Moments, From MAGIC to Glasses
By Grace Wehniainen
24 Years Ago, 'Friends' Dropped Its Most Underrated Ross & Rachel Episode
By Grace Wehniainen
Lindsay Lohan & Jonathan Bennett Celebrated Mean Girls Day Very Differently
By Jake Viswanath
Get Even More From Bustle — Sign Up For The Newsletter