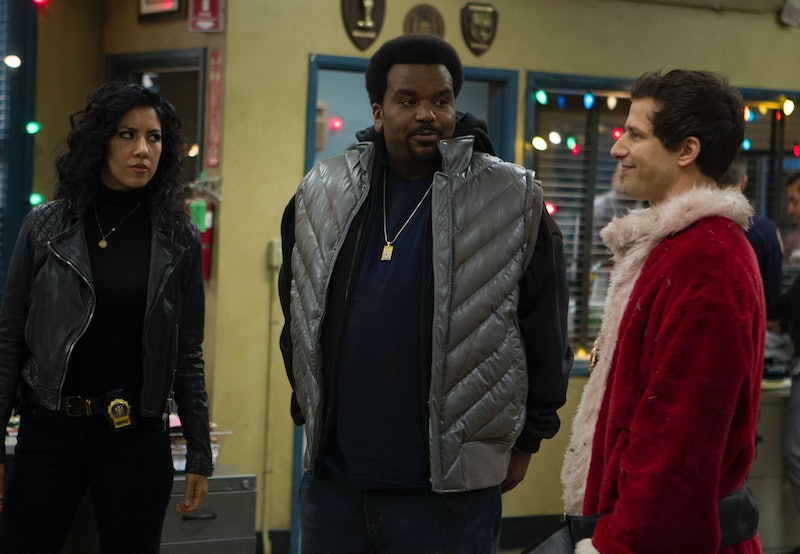 Just because it's the holiday season doesn't mean there isn't still crime to clean up on the streets. No one knows that better than the Brooklyn Nine-Nine gang. If you were looking for tree trimmings, eggnog, and some holiday cheer, you've turned on the wrong holiday episode. Though the episode opened up on Jake going undercover in a Santa Claus suit, Craig Robinson returned to guest star as the Pontiac Bandit for this wild holiday ride.

If the Pontiac Bandit doesn't mean anything to you, I don't even know what to say other than that's a darn shame. He was one of the most memorable and most hilarious criminals of Season 1 who Jake and Rosa used to help them catch a car napper. Unsurprisingly, the Pontiac Bandit wasn't completely honest with Jake and Rosa, leading them to believe he was leading them to a car thief when in fact he wasn't and then slipped away.

But people change, right? And what better time than Christmas to give someone a second chance? That's what entertainment always teaches us anyway.

So when Jake nabs the Pontiac Bandit, whose real name is Doug Judy, once again he and Rosa use the perp to help solve a crime. This time, it's to track down a Giggle Pig dealer, which has been a continuing plot throughout this season.

Sweet, sweet Jake. He's always eager to catch criminals, but he doesn't ever really seem to understand that they're not his friends, does he? They say, "Keep your friends close, and you enemies closer," but Jake really takes it to a whole new level. Though it may not be an effective crime-solving tactic, it is no less enjoyable for us watching at home. I mean, he and the Pontiac Bandit were so cute together, wearing matching robes as they chowed down on some room service while they plotted how they were going to catch the Giggle Pig dealer. And they were both so excited about Jake's backstory created as a cover while talking with the drug dealer. Of course, the Pontiac Bandit pulls one over on Jake and Rosa again. But even so is it so wrong for me to want this perp to be around always?

That being said, Season 2 is getting to be oversaturated with guest stars at this point. The majority of episodes this season has featured a guest star, be it Kyra Sedgwick's Madeline Wuntch, Eva Longoria as Jake's love interest, or Ed Helms as Jack Danger. This isn't to say that they haven't been successful additions to Brooklyn Nine-Nine this season or that I haven't enjoyed watching them. But the ensemble cast of Brooklyn Nine-Nine is so strong that I miss the focus just being on this motley crew of characters. All I want for Christmas is for Brooklyn Nine-Nine to be better at bringing the magic that it had during Season 1.

More like this
10 Stranger Things-Inspired Halloween Costumes For True Fans
By Emma Carey
7 ‘Bridgerton’-Inspired Halloween Costumes You Can DIY
By Emma Carey
Shonda Rhimes' Net Worth Makes Her One Of The Wealthiest People In TV History
By Hugh McIntyre
The Best 'Grey's Anatomy' Intern Moments, From MAGIC to Glasses
By Grace Wehniainen
Get Even More From Bustle — Sign Up For The Newsletter