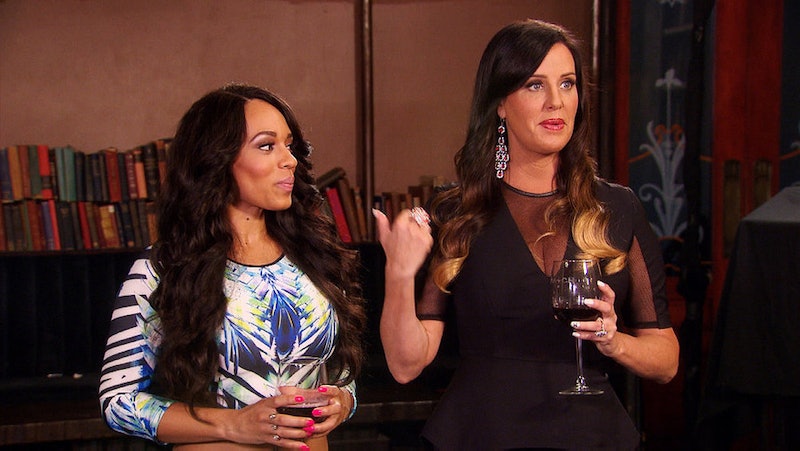 I was not expecting to be this into the Season 8 premiere of The Millionaire Matchmaker . It was… pretty great! We'll see if the new focus on celebrity clients will net people who are as good for the show as Larry Birkhead and Melyssa Ford. Birkhead is the classic "guy who's too sweet" who we see on the show a lot, while Melyssa, whom I LOVE from Blood, Sweat & Heels , is so bad at picking dates she needs a professional to help her get back into the game. But even though these two are right out of the classic Millionaire playbook, pretty much everything else about the show has been tweaked for the better.

I'm not sure if they'll be switching up the interview portion like this for every week — probably not — but it was a lot less severe than hearing Patti rail women for their looks for a ten minute segment. At this mixer/casting call, everyone was appropriately dressed up and they didn't feel the need to push it too much with the cheesy humor.

Obviously a big draw of the show is when Patti gets judgmental and yells at people, and there's still plenty of that. But with a better, less screwy staff who seem to value their jobs, it doesn't feel quite so stupid. David was the only good thing from last season, so I'm glad to see him back, and her new staffer, Candace Smith, isn't as amazing as Dustin and Rachel, but she knows what she's doing.

Patti gets starstruck at even the most minor brush with fame, so she was a little softer on these Bravolebrities and tabloid fixtures than she usually is on a random investment banker insisting on netting a super hot Jessica Alba lookalike. After intermittently catching the reruns that were on all week, the show at its best is when it's not focused on turning every woman into a Herve Leger bandage dress-wearing, spray-tanned, Kardashian clone. Now Patti's not screaming at women who were accidentally invited to a lesbian mixer even though they're straight, she's just being inappropriate about boners when talking to slightly uncomfortable guys eager to be picked by Melyssa.

The only real problem with this episode? Why on earth did NBC have to make Larry and Michelle go on a date to Universal Studios? I get that they're struggling to cross-promote their properties half as well as ABC/Disney does, but two adults should never go on a blind date at a crowded amusement park. Seemed a little weird. But if that was the only downside to an episode of The Millionaire Matchmaker, I'd say Bravo has pulled this series out of a serious tailspin and turned it back into a guilty pleasure. Oh, and both of the dates kissed and had sweet captions at the end — this season is off to a good start.