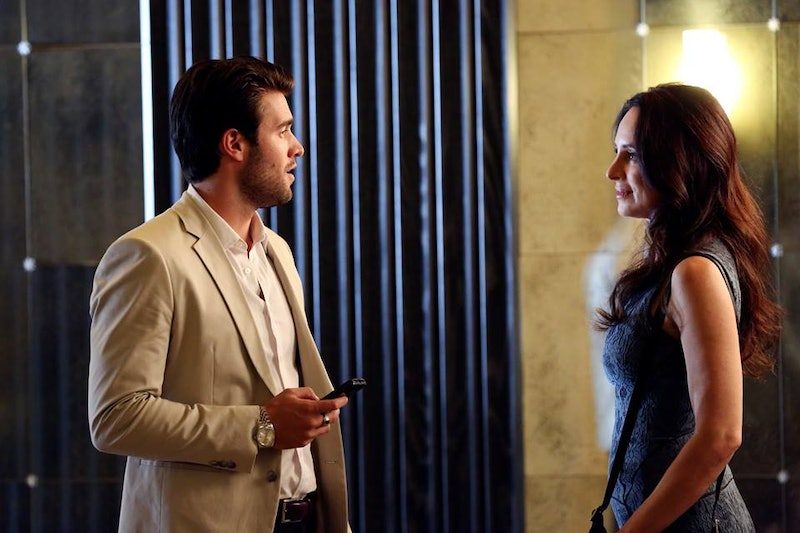 Well, it looks like Josh Bowman finally got what he's been asking for. On Sunday night's midseason finale, "Atonement," Daniel Grayson died on Revenge and, even though I haven't liked Daniel for a long time, I actually felt pretty sad about it. After an episode of soul-searching and deciding to be a better man from this point forward, Daniel faced the wrath of another angry girl with daddy issues. But, at the very least, Emily was able to give him a little something before he took his last breath — Emily admitted that "it wasn't all a lie" with Daniel. So, at least he could die knowing that he didn't waste most of his best years with a woman who didn't love him.

Surprisingly enough, Daniel died will trying to protect Emily — you know, the woman he shot with the intent to kill on their wedding night? And, because Revenge is such a great, well-rounded series, Daniel died of two gunshot wounds to the chest — extremely similar to the shots he took at Emily. And here we are with two of Emily's love interests down and only Jack left to go.

Sunday night's episode was actually all about Daniel in a way. Revenge treated us to flashbacks of Daniel's past with Conrad as he reflected on whether or not he'd be a worthy father to his and Margaux's baby (yes, she revealed that she was pregnant). Because Margaux wasn't entirely convinced and had all but decided to go it alone before realizing that Daniel still had some potential, which was essentially my thought process through Season 4 of Revenge. Margaux called Daniel and asked him to come be with her essentially minutes before Kate (yes, the FBI agent who's apparently Malcolm's daughter and is also dead now) pulled the trigger on Daniel and killed him.

So, not only did the heir to the Grayson name get forgiveness from the mother of his unborn child, he also got to forgive himself for getting involved with Emily. It was a poetic moment, actually. And, I never thought I'd actually say this, but I'm going to miss Daniel Grayson and all of the sometimes-childish behavior he's exhibited over the past three seasons. Revenge just won't be the same without him.

More like this
The 'Skins' Cast Shared The Reunion We’ve Been Waiting For
By Sophie McEvoy
12 ’90s Movie References You Missed In 'Do Revenge'
By Radhika Menon
Paul Mescal, Man Of Mystery
By Samantha Leach and Heather Hazzan
What’s New On Netflix: Ana De Armas’ 'Blonde' & A Nick Kroll Special
By Arya Roshanian
Get Even More From Bustle — Sign Up For The Newsletter