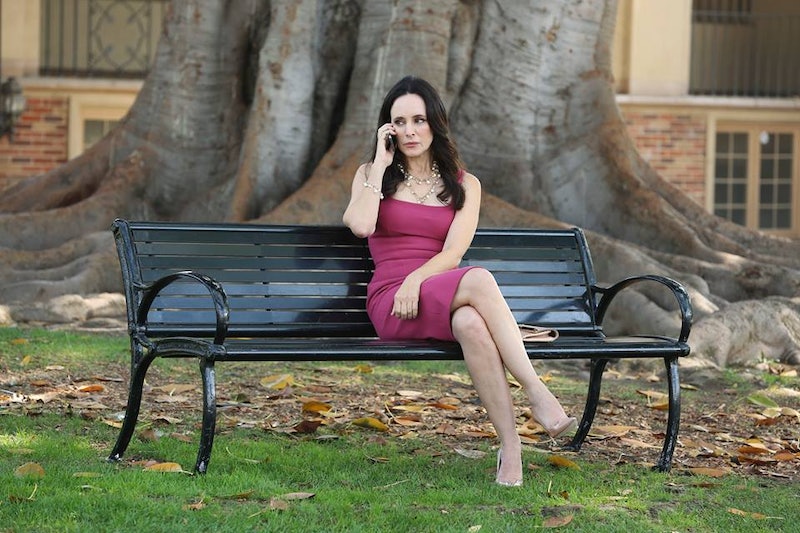 It's been a long time since Revenge has been able to surprise me. I actually went through a period of time in Season 3 where I was convinced I might be able to quit the series for good. But, thankfully, Revenge Season 4 has made it impossible to imagine a life without this show. During Sunday's midseason finale, "Atonement," Daniel Grayson died, which surprisingly sad for me, considering how much I've despised him in the past, but Daniel isn't the only Grayson on the chopping block. Revenge also revealed that David Clarke wants to kill Victoria and he's already decided how he wants to do it. You're surprised, right? Me too.

I was actually starting to believe this whole David and Victoria romance thing, but apparently David Clarke is a much better actor than we all thought. And it's entirely possible that he's been playing Victoria this whole time — for reasons they have yet to be determined aside from lulling her into a false sense of security that he didn't blame her for what Conrad did to him. Honestly, Victoria, I expect better from you — you were married to Conrad for that many years and you can't pick up on when a man is lying to your face? C'mon.

David left the Hamptons and paid a visit to his former cellmate who is, apparently, a botanist. The man give him a pretty lethal dosage of Belladonna (enough to take down a 200-pound man) and David pretended like it was intended for Malcolm, the same man who ordered the hit on him in the hospital. Well, that's not the case at all — later in the episode, David spiked Victoria's glass of wine with the herb and, even though she didn't drink it, he made it blatantly obvious that he was waiting, impatiently, for her to kick the bucket. But why? It seemed like David really wanted to be with her, it seemed like he loved her, even after Victoria admitted to her hand in Conrad framing David and sending him to prison.

It seems like David's time with Victoria might've run its course and that he's better at this whole thing than he's letting on. Sure, it made sense to be with Victoria to make his return to society easier, to get his story out their quicker, and to have access to exactly what he needed. But now that Victoria is questioning him and poking around, it's time to get rid of her before she becomes a risk yet again. When Revenge returns on Jan. 4, Victoria will be mourning the death of her son, but it seems like Revenge fans will be mourning the death of Victoria Grayson pretty soon as well.

More like this
Victoria Beckham Loves Teasing David About His “Sticky” New Hobby
By Sam Ramsden
'The White Lotus' Season 2 Trailer Teases Multiple Affairs & Another Dead Body
By Bustle Editors
Who’s The Richest 'Grey’s Anatomy' Star? See The Net Worth Of Each Cast Member
By Hugh McIntyre
Dan Levy Appears In The Latest Teaser For The Weeknd's HBO Series, 'The Idol'
By Jake Viswanath
Get Even More From Bustle — Sign Up For The Newsletter