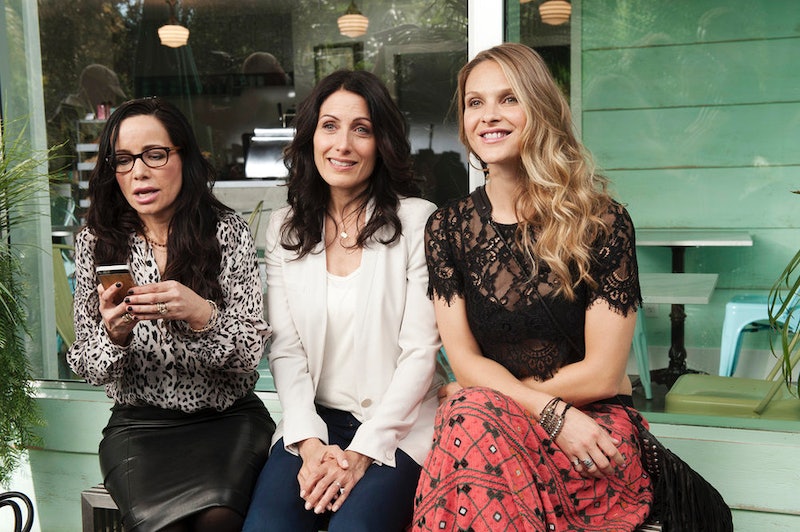 Girlfriends' Guide to Divorce is Bravo's first scripted series. It was hard to know exactly what to expect from the show before it aired since when I think Bravo brand my mind goes directly to the trashy fun of the Real Housewives series. Written by Buffy alum Marti Noxon and based on Vicky Iovine's best selling book series, this show represents a pretty ambitious evolution for Bravo. And that pedigree shows: Critics love Girlfriends'. So will Girlfriends' Guide to Divorce be renewed for Season 2?

Girlfriends' Guide stars Lisa Edelstein as Abby McCarthy, the kind of woman who seems to have somehow been able to have it all. She's successful, wonderfully married with two kids, and absolutely gorgeous. But looks can be deceiving. We soon find out Abby and her husband have been separated. Furthermore, her husband is a walking stereotype, banging a very young actress. They keep the image up of a happy couple for their kids and Abby's career as a best selling self-help guru.

After all who would take that particular brand of "you can do it, girl!" advice from someone whose marriage has fallen apart? The image of a woman who "has it all" is potent, powerful, and apparently, marketable. That image falls apart at a book signing and Abby's life takes a dramatic turn. The other major characters include Abby's BFFs Lyla (Jeanine Garofolo) a snarky, tough lawyer who handles her situation with her ex-husband viciously and former model Phoebe who with all drinking and smoking plays the free spirited role of the group. The show hits a sweet spot that fans of Bravo's reality programing know very well. Girlfriends' Guide is essentially about watching pretty, privileged women flail spectacularly and try to put themselves back together. But will Girlfriends' Guide be renewed for a second season?

If I was only considering the critical response, I'd say that Girlfriends' Guide will be renewed. The reviews for Girlfriends' Guide have proven to be positive overall garnering a lot of comparisons to Sex and the City, which seems to be the fate of any dramedy with women at its center who behave in unexpected ways. The LA Times says that while the Girlfriends' Guide pilot has the usual rough spots for a first episode it is a "surprisingly good scripted series."

If Bravo’s goal is to be taken seriously in the quality-content game, Andy Cohen should give the network his mazel. This is a solid first step. The show is well produced and features solid performances from the female principals. Entertaining from start to finish, it offers a fun girls-night-out sequences as well as high drama; an explosive fight between Abby and Jake is the pilot’s darkest — and best — moment.

The problem that Girlfriends' Guide may have when it comes to renewal are its ratings.

Earlier this year Bravo came off of a really good season for ratings. But Girlfriends' Guide 's ratings are much lower than usual numbers for the channel. Real Housewives of DC was cancelled and they were pulling in over double the viewers of Girlfriends' Guide. The problem is there are no other scripted shows on Bravo to compare these ratings to. The powers-that-be behind Bravo will definitely be paying attention to the number of viewers and maybe with louder, more positive buzz, and some better marketing the show will gain traction as its first season continues.

Bravo usually doesn't have an issue with cancelling a show unexpectedly a la Real Housewives of DC. But since this is a new foray for them and has reviews are generally pretty positive, Girlfriends' Guide to Divorce deserves that second season.