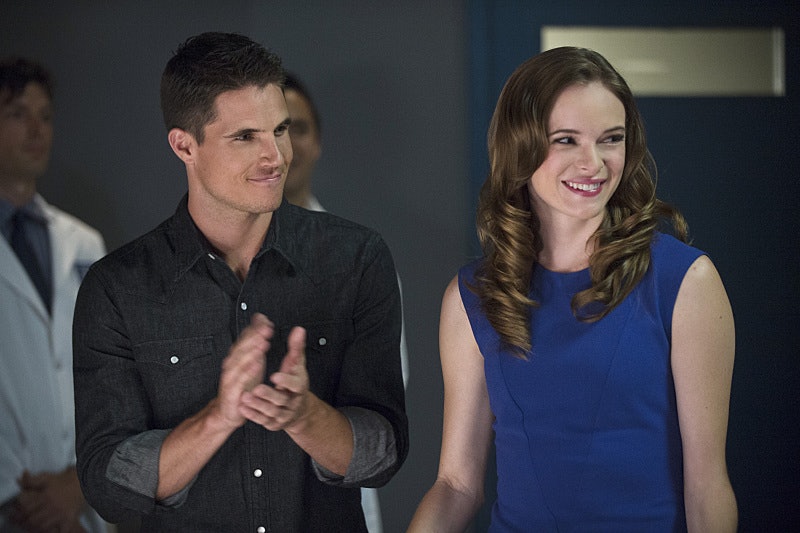 After seeing the flashback to the death of Ronnie Raymond, Caitlin's fiance, there was one question on the lips of fans of The Flash . When will Ronnie Raymond return as Firestorm? We finally got an answer thanks to the end of last week's "Arrow vs. Flash" crossover event, revealing Ronnie is still alive in an explosive way. But his fiery metahuman abilities aren't the only thing different. He doesn't even seem to know who he really is. In an interview with The Hollywood Reporter, Robbie Amell, who plays Ronnie Raymond/Firestorm, said, "[M]y character is really going through some stuff. He's schizophrenic, doesn't know what's happening, he's confused and dangerous to the people around him. You may not see Ronnie Raymond for a little while, but you'll see Firestorm." So any fans expecting Caitlin and Ronnie's reunion to lead to wedded bliss may need to hold off on that. What's going to be interesting for fans of the series is not only watching the dynamics of Firestorm, but seeing how the reveal that he's alive affects Caitlin and everyone else on The Flash.

In the comics, Firestorm is a mix of two very different people — high school student Ronnie Raymond and Professor Martin Stein. Basically, Ronnie tries to stop a protest that turns violent with an anti-nuclear activist group that wants to nuke an experimental nuclear reactor. Professor Stein is knocked unconscious and left for dead, with Ronnie tied up to die in the explosion. But instead of dying, the nuclear reaction does something far weirder to these very different men.

It fuses them into one being. Ronnie has physical control of the body, which is explained by him being conscious while Professor Stein acts like a voice in the back of his head. As Firestorm, they're able to re-arrange atomic matter, move through solid objects, and use incredible fire power. Thus far, on The Flash we only know of Ronnie having the latter ability. But, Amell did say about his character to The Hollywood Reporter, "from the amount of powers they've given him, he's going to be a difficult foe for anyone to go up against."

Banter marks the symbiotic relationship between Professor Stein and Ronnie, but things get far less humorous when they split. Professor Stein doesn't remember his time as Firestorm, turning quite self destructive until Ronnie explains what the hell is going on. The Flash isn't shying away from the odd duality of the character. It was announced that Victor Garber will be Dr. Stein, the other half of Firestorm on The Flash. It remains to be seen how exactly we'll be introduced to Dr. Stein in the series, but I doubt we'll see Garber's floating head behind Ronnie, that would prove to be too goofy.

What I'm afraid of is how Ronnie's new abilities and reappearance after being presume dead will disrupt the group. Caitlin will undoubtedly be hell-bent on rehabilitating Ronnie. Cisco is feeling survivor's guilt and will of course support her. And I doubt either of them will tell Harrison Wells. It isn't that they don't trust Wells, but they know how single minded he is. If he did find out, he would probably find a way to nix any sort of reunion with Caitlin since he doesn't want anything getting in the way of his mysterious plans for Barry Allen. Does this mean we're closer to seeing Caitlin become her comic book alter ego Killer Frost? Executive producer Andrew Kreisberg told Entertainment Online that it isn't likely we'll see Killer Frost anytime soon.

Ronnie's reemergence as Firestorm and the full blown introduction of the show's Big Bad, Reverse-Flash, is going to put an immense strain on the group. So the fun of the crossover event last week may feel a bit short-lived. That doesn't mean the show will go all dark and gritty. But events will have a lot more weight to them for the second half of the season. I'm just hoping all our favorite characters on The Flash remain alive and friendly by the end of this season.