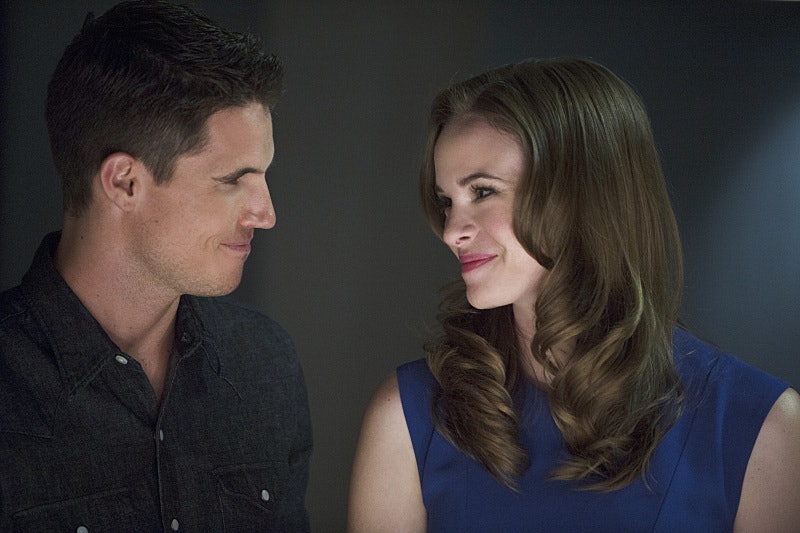 The Flash continues to prove that it is one of DC Comics' best on screen adaptation. The show has hit a sweet spot balancing deep cuts into comic book lore, great cast chemistry, and suspenseful narratives. As we hit the mid season finale, "The Man in Yellow," expect the show continue being aces as we finally pull back the curtain on Reverse Flash. Another major reveal the show has to juggle? Caitlin's fiancee, Ronnie Raymond, is alive as a pretty unhinged metahuman with little to no memory about himself. Fans of the comics know him as the hero Firestorm. And he's bringing company in the form of Dr. Martin Stein played by Victor Garber. But when will we meet Dr. Stein, the other half of Firestorm?

Variety reports that we will first see Victor Garber as Dr. Stein in the twelfth episode of this season, which means we'll have to wait until after The Flash returns from hiatus on January 20. If you're as psyched about this as I am that will feel like a pretty long wait. But that doesn't mean we won't get hints about the nature of Ronnie transformation and existence of Dr. Stein before then. I wouldn't be surprised if we hear Dr. Stein's voice before we see him, maybe even in tonight's episode.

Doing so means the writers can create a slow burn when it comes to the character (these fire metaphors are too easy). We know Ronnie is going to appear in Tuesday's mid-season finale. While the episode rightly focuses on the diabolical speedster Professor Zoom/Reverse Flash that becomes Barry Allen's greatest nemesis, we know Ronnie and Caitlin will interact thanks to somewhat spoilery promos. What's going to be interesting is seeing how The Flash pulls off Firestorm.

In the comics, Firestorm is a result of a nuclear blast that fuses Ronnie Raymond with Dr. Stein. While Ronnie controls the body, Dr. Stein operates as a voice in the back of his head. When the characters have appeared on animated series like Super Friends and Batman: The Brave and The Bold, the second, disembodied aspect of Firestorm is usually depicted as a floating head. That would be hilariously goofy on The Flash, so I don't expect that to be how the dynamic between Dr. Stein and Ronnie is visualized.

The Hollywood Reporter hinted at how the show is planning to handle Firestorm:

Dr. Stein is a brilliant but arrogant nuclear physicist who has sacrificed everything, including a marriage, for his work in transmutation. After he discovers the particle accelerator fused him with the younger, more impulsive Ronnie Raymond [...] races to find a way to separate the two before it's too late.

What's still unclear is how exactly Ronnie fused with Dr. Stein since there was no hint in the flashbacks that anyone else was in that compartment of the particle accelerator. One interesting thing I noticed in a set photo of Ronnie and Dr. Stein is that they're wearing the exact same outfit although Ronnie's looks like he's been roasted over a barbeque. That means The Flash is really not shying away from the odd aspect of the characters sharing a body, how that will be handled remains to be seen.

The dynamic of Firestorm is a bit tricky to pull off but I have faith in The Flash to succeed. What's more is that the casting of Garber makes me wonder are the rumors of a Firestorm spinoff true. Casting an actor of Garber's standing in the role definitely adds fuel to that idea, but I doubt there will be a spinoff from The Flash this early on. The arrival of metahuman Ronnie/Dr. Stein means the bonds of The Flash and his colleagues will be tested as questions arise about how to handle this situation. How far is Caitlin willing to go to save Ronnie from madness? Could this lead to Caitlin becoming Killer Frost? Will she hide it from Harrison Wells, who doesn't want anything to impede Barry's developing abilities?

One thing is certain: Firestorm will be very important to the back end of the first season when it starts in January.