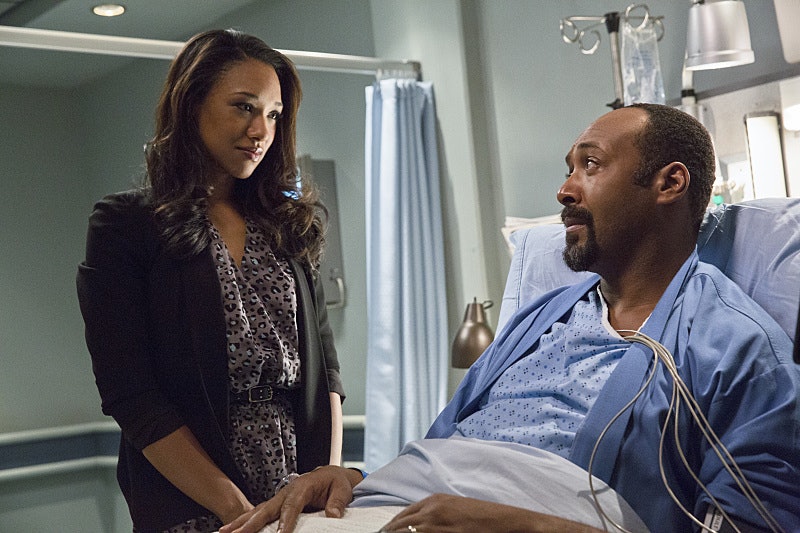 Iris West has proved to be a point of contention within the fandom of The CW's The Flash . Personally, I love Iris. Candace Patton brings a warmth and compassion to the role that works well with the show. Her chemistry with Barry Allen is aces, especially when he's masked as The Flash. Though Iris blogging about The Flash, while noble, is definitely a bit misguided. The problem is that the writers have put her in a precarious position, being one of the few main characters who don't know that Barry is The Flash, which means she sometimes does things for sake of the plot that seem well... kind of dumb. In DC Comics' The Flash , Iris doesn't learn the truth until after she marries Barry. But the show may take a different approach.

In a recent interview with Entertainment Tonight, Grant Gustin, who plays Barry Allen, said that even though Barry and Iris aren't on speaking terms, "he is going to be honest in the near future about some things. I won’t say what that is exactly, but something very big." Does that mean Barry will tell Iris he's The Flash? Maybe. But their dynamic isn't the only thing that changed when Iris made the leap from comic books into television.

On The Flash, Iris is a psychology student (although we see little of that) whose only reporting is for her blog that focuses on The Flash (a moniker she gives the superhero), which she created for her journalism class. However in the comics, Iris West-Allen is cut very much from the same badass tapestry as Lois Lane. She's an ace reporter known for being caring, dedicated to those she loves, and whip smart. She is probably one of the most important women within The Flash mythos. She not only has a long, complicated history with her husband Barry, she's also the aunt to the third Flash, Wally West. Like Lois Lane is to Superman, Iris is Barry's longest running and most definitive love interest, since she was introduced in the same issue as he was and has remained important figure ever since. Even though the New 52 has nixed their romance, fans expect them to eventually get together in the rebooted universe.

One of the sharpest contrasts between the comics and the show involves how Barry has been adopted by Iris' detective father, Joe West, which adds an odd dynamic to any future romance. But the chemistry between the characters is good enough that I can overlook that. Undoubtedly, the most talked about change for Iris isn't her career or family dynamics, but race. In the comics, Iris (and other members of the West family including eventual Flash, Wally West) are white with red hair and freckles.

During the PaleyFest Fall TV Preview discussion earlier this year, actress Candace Patton addressed Iris' race change, saying, "For me to be a black woman and playing this role — someone is out there looking out for me. I can only thank [Kreisbeg and Berlanti], Jeff Johns and the CW for allowing me to be in this role and give hope and inspiration to other young girls that look like me or are marginalized." She's right. Comics are still slow on turning around their diversity issues and I am extremely happy to see a woman who looks like me in this role. Plus, this change meant we got the amazing actor Jesse L. Martin to play Detective Joe West.

Co-executive producer of The Flash Greg Berlanti made a great point at the same event when he said, "You want to go to work every day and tell stories that look and feel like the audience, the America that is watching." Just as importantly, The Flash has stayed true to the core of Iris. While she isn't yet the ace crime reporter we know her to be in the comics, I definitely expect the show to push her in that direction. She's already showing an interest in reporting. We've also heard her mention that she wanted to be a detective, but Joe didn't approve, so crime reporting allows her to touch on both interests.

Iris has proven to be just as caring, intellectually curious, and full of verve as her comic book counterpart. So, those who love the character don't worry, Barry will probably marry Iris at some point, just not anytime soon. The only complaint I have is that I am getting frustrated waiting for her and Barry to get together. Can't they just make out already?