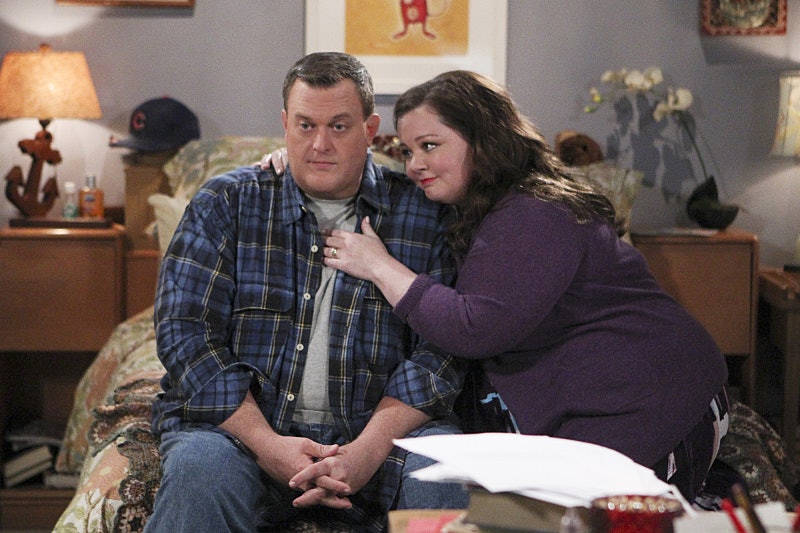 Our favorite TV couple is back! Mike & Molly Season 5 premieres on Monday night, which means that Mike Biggs is back in our lives just in time for the holidays. Even though we’ve known Billy Gardell as Mike Biggs for almost five years now, he was making people laugh long before his time on CBS. Forgot where the show left off? Molly was accepted to an eight-week writing program at the end of Season 4. The show is picking up right as Molly returns from the workshop. Mike and Carl eat at Abe’s and everything is back to normal in the world of Mike & Molly.

Beginning as a stand up comedian, Gardell worked his way across the country in comedy lounges until he landed in Hollywood and made his break into the business. He even has his own Comedy Central special, so you know he’s made it pretty big thus far. Starting next year, Gardell is also going to host a syndicated gameshow called Monopoly Millionaires' Club, and if he is anything like Alex Trebek, he could be around forever. "Hosting a big game show is a bucket list level type of job for me," Gardell said in a press release about the show found on his website. "I've always had a big time game show as one of my goals, and to have the opportunity to be a part of MONOPOLY MILLIONAIRES’ CLUB is a real honor. It's an iconic game that resonates with everyone, and I want to see someone win one million dollars!"

Obviously we know Gardell best as Mike, but here are some of other things he has been involved in over the past 20 years.

Gardell reprised his role of Lyle Winkler on Sullivan & Son for the third time this past summer. Lyle is a comic book collector and a youth hockey coach that has come to the bar for one episode every season.

My Name is Earl

In the Jason Lee comedy My Name Is Earl, Billy Gardell played the role of Officer Jeff Hoyne. Over the course of the show, he appeared in 12 episodes between Seasons 3 and 4.

In 26 episodes, Gardell played Jimmy Hughes' friend Billy Colavita on Yes, Dear. The sitcom aired for six seasons in the early 2000s and was one of Gardell’s first reccurring roles.

In 2003, Lucky had a quick 13-episode run and Gardell was a starring character alongside John Corbett (Aiden from Sex and The City) and Craig Robinson (Hot Tub Time Machine, The Office). Gardell played Vincent Sticcarelli, a member of a group of men with an addiction to gambling.

On top of all his reccurring TV roles, he's also appeared on super popular shows including Desperate Housewives, Bones, The Practice, Monk, King of Queens, CSI and many more. Basically, if Mike & Molly ever gets canceled, we'd probably see him on a new show very quickly.

Just because Gardell is known for his TV roles, doesn’t mean he hasn’t starred alongside major actors in some big movies. His roster of movies includes You, Me and Dupree, Bad Santa and Jersey Boys.

More like this
What’s New On Netflix: Ana De Armas’ 'Blonde' & A Nick Kroll Special
By Arya Roshanian
Molly-Mae & Tommy Fury Shared The Cutest Gender Reveal Video
By Sophie McEvoy and Sam Ramsden
9 Movies & TV Shows That Prove Stanley Tucci Elevates Everything He’s In
By Jake Viswanath and Radhika Menon
'Survivor' Is Finally Coming Back To UK Screens
By El Hunt
Get Even More From Bustle — Sign Up For The Newsletter