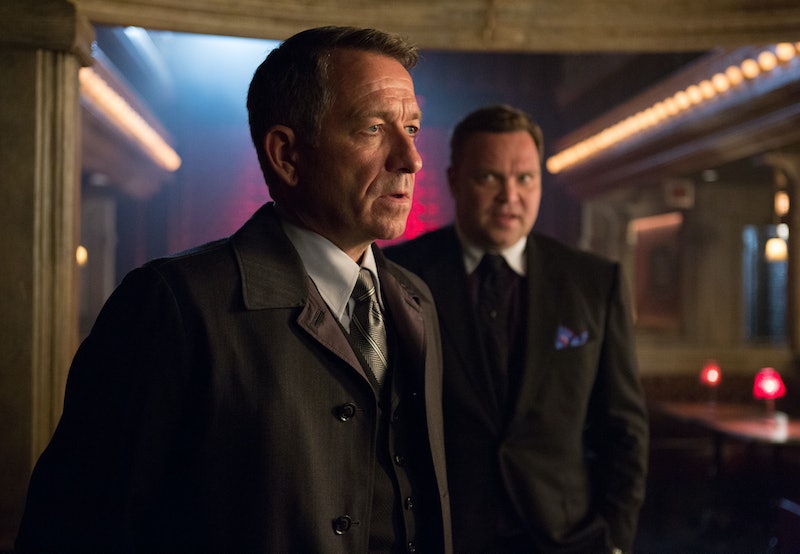 Alfred Pennyworth is one of the characters who's changed the most in the transition from comics to Gotham 's first season, which is currently on winter break. And while his brusque manner was sometimes surprising with Michael Caine's laid back take on the character still fresh in our collective minds, Sean Pertwee is really starting to grow into the character and make it work. But he doesn't seems much like your average butler (if there even is such a thing) or even like your average portrayal of Alfred Pennyworth. With his knowledge of sword fighting and almost militaristic sense of right and wrong, I believe they may be hinting at a Gotham backstory for Alfred. He sounds more like a double agent or former soldier than he does a mild-mannered British servant.

But why would the Waynes hire a trained killer to serve them tea? As always, the answer lies in DC Comics. There are several different versions to choose from, but many of the comics gave Alfred a complicated and varied personal history. He was, in fact, a retired secret agent in the original comics, who fell into butlerhood only because it was his father's trade. He had no personal history with the Wayne family, and Batman even tried to keep his superhero identity secret from Alfred. Obviously, Gotham has abandoned quite a bit of this original history.

After the "Crisis," which wiped the backstories for all DC characters clean, Alfred's backstory was amended to that of a highly respected British actor who was wooed away from his career by the Waynes. But then, he became Bruce's guardian and raised him following the deaths of his parents, like we're seeing on Gotham. Later on, another comics history amendment combines those two backstories to settle on Alfred Pennyworth, former British soldier and part-time actor.

If I had to hazard a guess as to where Gotham's backstory will fall among all of these choices, I'd say it involves the Pre-Crisis storyline — double agent or military man — but forces him into the Post-Crisis role of Bruce's legal guardian and the person responsible for helping him become Batman. Pertwee's performance just doesn't read "hopeful Shakespearean actor" to me. Instead, he seems militaristic, precise, and even a little stiff at times. He knows how to fight, and Bruce is the one who's clever and tactical — Alfred's the one who wanted to throw all of his books in a fire.

More like this
Nicola Coughlan Shared A Lady Whistledown Excerpt From ‘Bridgerton’ Season 3
By Grace Wehniainen, Alyssa Lapid and Sam Ramsden
Viserys’ Fate On 'House Of The Dragon' Could Differ From The Book In This Surprising Way
By Grace Wehniainen
'The Lord of the Rings: The Rings of Power' Revisits Iconic Spots From 'The Hobbit'
By Darshita Goyal
Everything You Need To Know About 'Rings Of Power' Actor Charlie Vickers
By Darshita Goyal
Get Even More From Bustle — Sign Up For The Newsletter