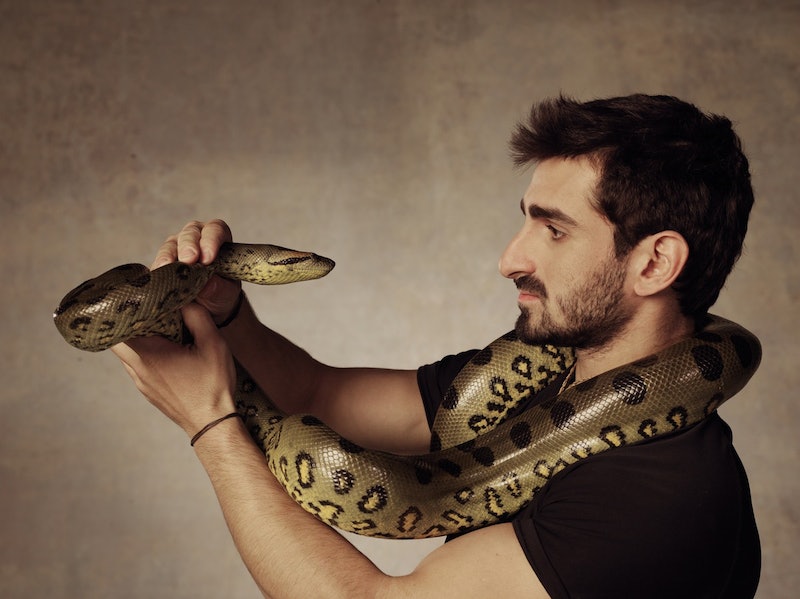 It turns out that there's something to be said about accurate marketing and titling when it comes to TV specials. The Discovery Channel's Eaten Alive was promoted as an experiment in which an adventurer, Paul Rosolie, would be, well, eaten alive by an anaconda on Sunday. Naturally, Eaten Alive drew criticism from PETA for the potential mistreatment of an anaconda for the sole purposes of entertainment and shock value. However, it turns out that they need not have worried. Much to the displeasure of viewers who actually tuned in for the show, Rosolie was never eaten alive by the anaconda. In fact, he was more squeezed alive, if anything.

According to Entertainment Weekly, "what viewers eventually saw during the two-hour special was a large anaconda attack Rosolie, coil around him, then start to eat his helmet. That’s when Rosolie had to call in his team to rescue him, saying his arm was being crushed." That was it. That was the whole thing. Apparently, Eaten Alive was one man's attempt to be consumed live by an anaconda rather than an actual depiction of a man being consumed live by an anaconda. That seems like simple semantics until you ask people to sit through two hours expecting one thing and instead give them another. Quite honestly, I'm relieved that the anaconda never had to stretch itself far enough to consume a grown man, but Twitter saw it very differently.

In a Q&A with EW in November, Rosolie did warn that Eaten Alive was the story of "an attempt. When you say Nik Wallenda is going to cross the Chicago skyline, they didn’t promise he was going to make it; they promised he would attempt it. So the show is called Eaten Alive and that’s what we worked as hard as we could to do. As for what happens, you’ll have to watch." I guess viewers either didn't really register the interview or, perhaps, didn't really register that the word attempt was meant to be taken as literally as possible. There's a special kind of irony in the fact that people have gone from worrying about the safety of Rosolie and of the anaconda to being outraged that Rosolie hasn't been eaten by the snake, but the outrage is winning out for now.

On the bright side, animal rights activists don't have to worry that Rosolie and his "experiment" still had a potentially negative impact on a wild snake in its habitat at all. According to PEOPLE, Eaten Alive used an anaconda in captivity for the show, to ensure that they would be "able to check her out, make sure she was okay. We kept in touch with her keeper for weeks afterwards to make sure she was alive and back to normal. We wanted to keep the suspense but really, it wasn't that big of deal for the snake. But people have been drawing such crazy conclusions, we let them wonder."

Whether that makes the two-hour special worse or better for the viewers is really up to them to decide, but it's good to know that every step was taken to make this stunt as safe for the snake and Rosolie as possible. And, to be honest, there was no way something called Eaten Alive was going to end well for anyone if it had actually happened.

Check out the attempt below.

More like this
‘Squid Game’ Creator Hwang Dong-Hyuk Just Dropped A Major Season 2 Tease
By Brian Anthony Hernandez and Bustle Editors
These 25 International Horror Movies On Netflix Prove Fear Is A Universal Language
By Bustle Editors
What’s New On Netflix: Ana De Armas’ 'Blonde' & A Nick Kroll Special
By Arya Roshanian
'Elite' Season 6 Is Arriving Sooner Than You Think
By Gretchen Smail and Grace Wehniainen
Get Even More From Bustle — Sign Up For The Newsletter