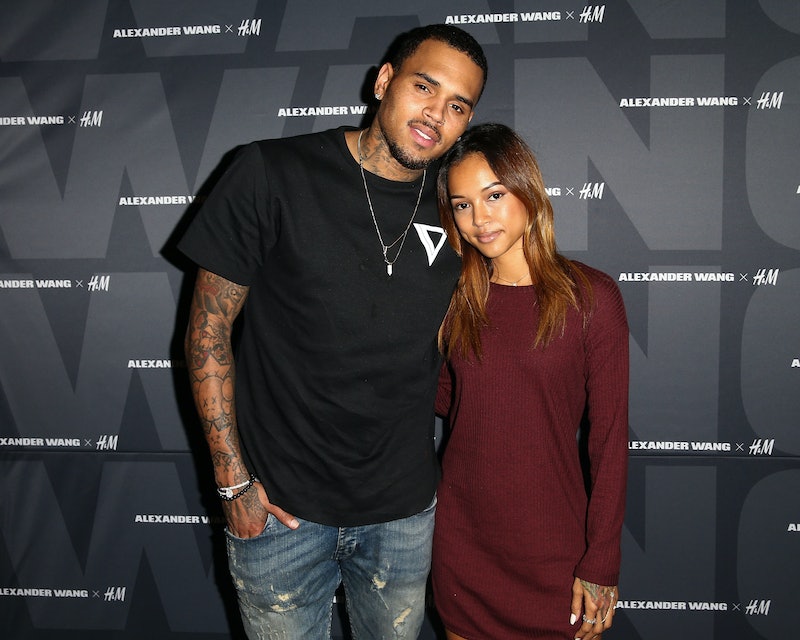 Quite honestly, I have to begin by saying that I find it unlikely that Karrueche Tran cheated on Chris Brown with Drake, not because of my admitted distaste for Brown but because Drake and Tran don't seem like they would be anything more than just friends to me. After all, this rumor just seems like an attempt to restart the Drake-Chris Brown-Rihanna love triangle. Plus, it's worth noting that Brown has now apologized to Tran for his words, which means they were either completely unfounded or that he didn't mean to air their private problems so publicly.

In an Instagram post on Sunday, Brown captioned an image of himself hanging his head with the words, "Being young and dumb is one of my strong suits and emotional at best. I love hard and react impulsively when I'm hurt at times." Does his apology make it okay that Brown slammed Tran as a cheater on Instagram — or at all? No. Does it help the situation a little? Yes. Personally, I would have preferred for Brown to more definitively state that Tran never cheated on him with Drake, if only so Team Breezy doesn't slut shame her on his behalf, but this apology is better than nothing.

Of course, people aren't going to let go of this potential feud so easily. It appears that Brown doesn't need to worry that Drake was looking to restart their feud by stealing his girl away like she's some kind of prize to be won. TMZ reports that sources close to the rapper say that Tran is not Drake's type. If you, like me, thought it was because she was in a relationship at the time, or her personality didn't mesh with his in that way, or even that this was the bro code at work, think again. Allegedly, Drake's just into girls with butts. "Drake's an ass man," says one TMZ source. "Think about it, all the strippers he gets with... the first out of his type was Rihanna."

It's TMZ and thus this should be taken with a grain of salt, but I have to say that I'm immensely disappointed that this is the way the story is already being spun. Isn't it bad enough that Tran and Brown are having problems so intense that a cheating accusation is being publicly slung around like a weapon to destroy Tran's reputation and image? Do we really need to start body shaming her too?

At the end of the day, this is a very complicated kind of situation and choosing sides in the whole affair (a term I use loosely) will really come down to (a) which musician is your favorite and (b) how much respect you have for Tran as a woman and a human being. The important thing to remember is that even if Tran and Drake do subsequently begin a relationship after this, then they are well within their rights to do so. Tran is now a single woman, as Drake is a single man, and that makes them both free to date whoever they want.

I don't think anything is going to happen between them — or that anything has happened between them — but I would personally love to see an end to this love triangle and cheating rumor. Whatever problems Tran and Brown are having should be handled privately and, if Brown's Instagram post is any indication, will be handled privately from now on. Let's leave Drake out of it.

More like this
Kanye West Apologizes To Kim K "For Any Stress I Have Caused" In Rare Interview
By Jake Viswanath
The Real Reason Russell Brand Decided To Quit YouTube
By Sam Ramsden
Molly-Mae & Tommy Fury Shared The Cutest Gender Reveal Video
By Sophie McEvoy and Sam Ramsden
Who Is Nick Cannon Dating & How Many Kids Does He Have?
By Jordyn Tilchen and Radhika Menon
Get Even More From Bustle — Sign Up For The Newsletter