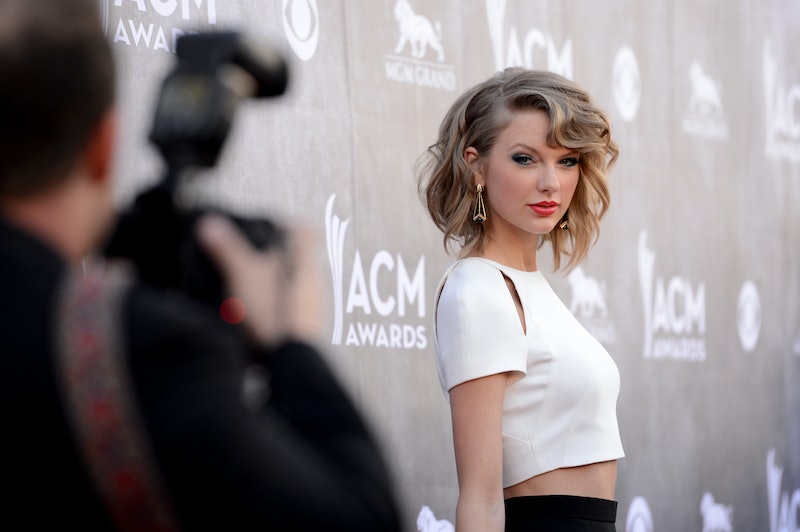 1989 singer Taylor Swift is basically taking over the world right now with her new album and her fresh outlook on life. She's all about feminism, good friends, and keeping her belly button a mystery. She's also not into dating right now, but that hasn't stopped every magazine ever from continuously asking her about her love life. In a recent interview with Billboard, Swift revealed that she's single so "no one gets hurt." She continued by saying, "I don't have anyone whose feelings are on the line except for me. If I was in love with someone right now, I don't know how I would handle everyone else weighing in on our stories."

I'm all for T. Swift taking some time for herself, but I want her to make that decision on her own and not because of the media stress. I know the press makes her life hard when they claim Swift's dating every man she spends two seconds talking to, and there have been no shortage of slut-shaming articles written about her. But she shouldn't allow them even more power to control whether or not she wants to be in a relationship.

Swift said a similar thing to Vogue UK a couple of months ago.

I don’t know how a guy is supposed to walk next to his girlfriend when there are 20 men with cameras, and he can’t protect his girlfriend because that’s the life she chose. I just don’t see how it could work, so I don’t think about it, and I kind of run from it when it presents itself. Cause I don’t think any guy really … They think that they would want to get to know me, and maybe date me, but I don’t think they want what comes with it.

There's no doubt that dating as a famous person must be hard, even more so when you're Swift and have this serial-dater persona in everyone's minds following you wherever you go. But I hope that the pop star stays single because she wants to and not because she's afraid of what the media will do. It's her life and she deserves the right to make her own decisions. The press shouldn't be allowed any of that power.

She's slaying the world right now and she can do that single or attached, so long as she's the one making that choice for herself. Girl power!

More like this
Taylor Swift Wants To Direct A Movie Next — But You Might Have To Wait
By Radhika Menon
Everything To Know About Taylor Swift’s 10th Studio Album, 'Midnights'
By Grace Wehniainen and Jake Viswanath
Adam Devine Hilariously Let Everyone Know He’s *Not* Accused Cheater Adam Levine
By Brad Witter
Kanye West Apologizes To Kim K "For Any Stress I Have Caused" In Rare Interview
By Jake Viswanath
Get Even More From Bustle — Sign Up For The Newsletter