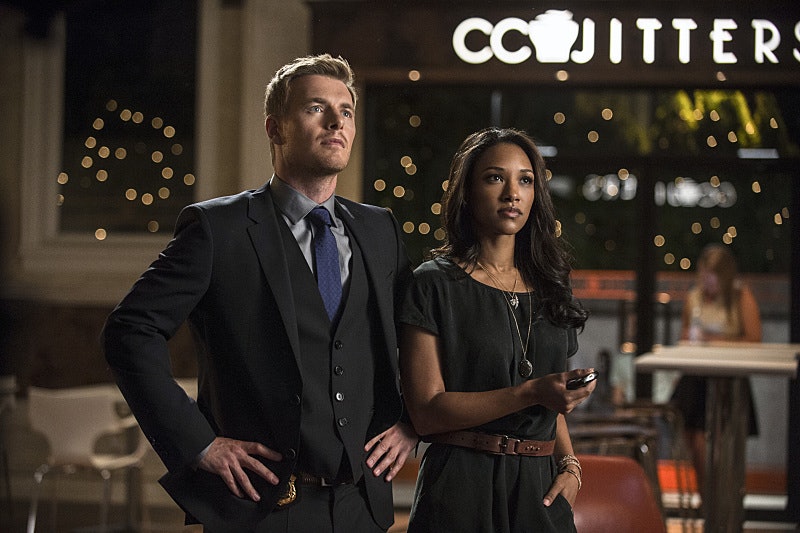 The Flash has quickly (pun intended) struck a chord with many. It's no secret that Grant Gustin is the perfect fit as Barry Allen, the superfast metahuman running around Central City saving lives. As much as the CW series focuses on his transformation, it also revolves around the lives of his friends and family, including the apple of his eye — Iris West. Barry is known for coyly showing his feelings for his best friend (especially when he's in disguise as The Flash), but he definitely isn't one to admit them to her face. Even her father and Barry's father figure, Detective Joe West, knows how much he cares for his daughter. However, Iris has eyes for someone else — Detective Eddie Thawne. On The Flash, Eddie and Iris seem quite serious, but will they last? Eventually, Iris will most likely learn of Barry's feelings, but whether or not the two will end up together is something we'll probably be kept in the dark about for awhile. As for Iris' relationship with Eddie, it's a complex one and comes with a lot of questions, including, will Eddie propose to Iris? Would she say yes? How does The Flash/Barry factor in?

As we saw during The Flash and Arrow crossover, Barry showed his more evil side (thanks to getting "whammied" by Ray Bivolo) as The Flash in front of both Eddie and Iris. Now, Eddie is out to take down The Flash with his very own task force, while Iris' Flash obsession has numbed and she no longer wants this masked man in her life — for now. Eddie and Iris seem to be on the same side regarding The Flash, so will this strengthen or weaken their relationship? It can easily go both ways, but I have a feeling Eddie's need to catch the superhero might disrupt his relationship with Iris. Think about it. He was extremely persistent in getting his boss to approve his task force. Now that it's a go, he'll go above and beyond to bring in the masked man. This could turn into an unhealthy obsession putting pressure on his relationship with Iris. The two might grow apart, and then break up.

Now that Iris seems to be over The Flash (ha, yeah right), she's more likely to focus on Eddie. With Eddie's dedication to his job and task force, Iris might get bored and irritated, causing her to walk away. There's also the chance Iris will continue her Flash research resulting in a rift with her man. Basically, these two need to focus on one another and not The Flash, but where's the fun in that? This is TV, after all.

However, if the two do remain together, there's always the possibility of a proposal. Would Eddie pop the question? Would Iris accept his proposal? I could see it going both ways. Eddie seems to really care for Iris, so an engagement is logical. Then again, now that he's all about hunting The Flash, he might not have time for a serious relationship. As for Iris, she also seems to really love Eddie, but would a proposal be too fast (unlike The Flash) for her? That type of commitment could scare her away. Seeing that she's now angry with the speedster and her crush seems to be on pause, all of those emotions could push her into an engagement.

I don't think Eddie and Iris will last too long, especially since there's the fact that Barry is in love with his best friend. Sooner or later, Iris will learn of his feelings (and his new identity), which will greatly impact their friendship and relationship.

Overall, Eddie and Iris' partnership is being invaded by one masked man —The Flash. With Eddie wanting to hunt down and arrest the so-called hero and supposed villain to some and Iris quitting her obsession with the metahuman, their relationship could go in many directions. With that said, if Iris and Eddie don't focus on each other rather than Barry's alter ego, their relationship is doomed.