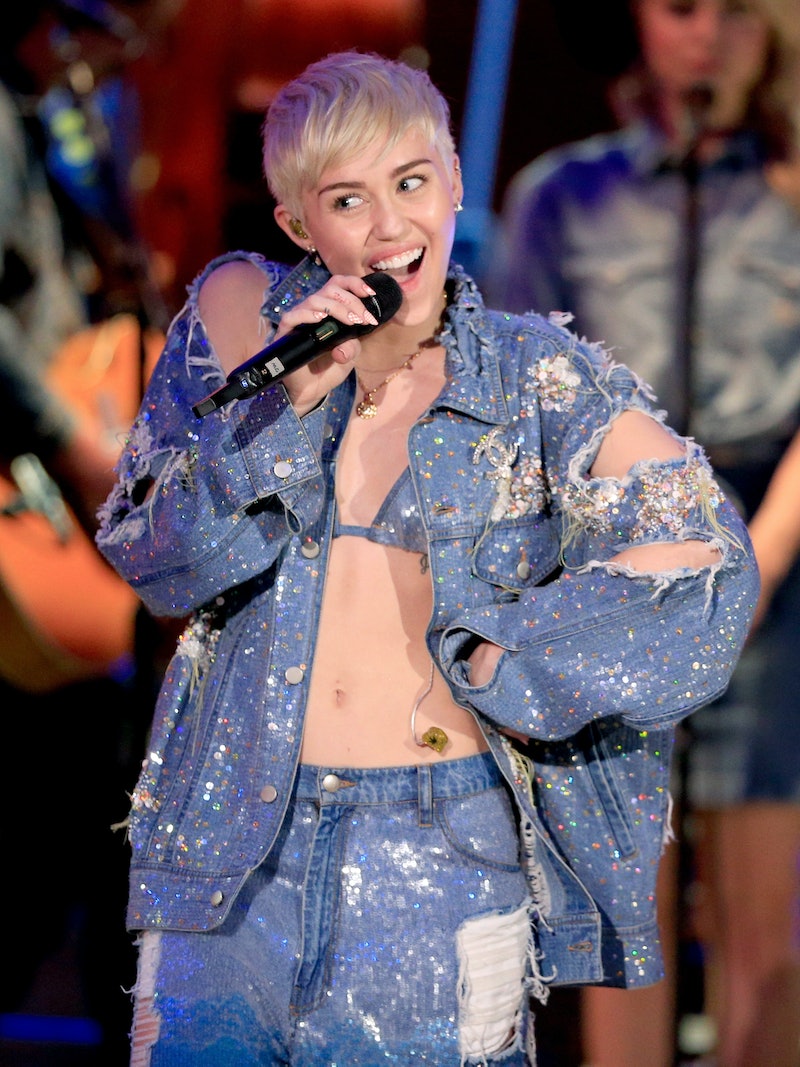 OK, this is pretty strange — even for Miley. During her show at Art Basel in Miami Beach, Miley Cyrus performed a new track called "The Twinkle Song" that she said was inspired by the death of a friend's cat. Apparently, the cat came to her in a dream on the night that it passed away and helped her to find the right words to comfort her grieving pal. I see. Obviously, the entire situation is pretty bizarre, but it's also kind of sweet. Cyrus knows how hard it is to lose a pet, and she just wanted to be there for her buddy. Also, she was probably really high when she had that ghost cat dream. And by probably I mean definitely.

Predictably, "The Twinkle Song" has lyrics that are super effing weird. When you read them, you will absolutely believe that the track was co-written by a cat from the other side:

I had a dream David Bowie taught us how to skateboard

And I had a dream that we took a helicopter

Flew it up too high, got stuck in the clouds

I wanna come down

And I had a dream we went on a safari

To look at that lion

And I had a dream you were dying

But I wasn't even crying

What does it mean?

What does it all mean?

What does it all mean, Miley? I have no idea, but "The Twinkle Song" won me over with its pretty melody. The simple arrangement also nicely showcases Cyrus' voice, which, in case you had forgotten, is totally fantastic. Another clip of the performance reveals that the track goes on to become quite emotional:

Whoa. Could "The Twinkle Song" be indicative of the sound that Cyrus is going for on her new album? Remember: She told MTV in August that the music she was working on with rock band the Flaming Lips was both "different" and "a little psychedelic." Welp, "The Twinkle Song" certainly fits that description (even if Cyrus wrote it with a cat and not Flaming Lips front man Wayne Coyne). I'm into it.

Cyrus also told MTV that it could take her FIVE YEARS to complete her next album, so I'm going to savor every scrap of new music that comes our way — even sad tributes to pets that are no longer with us. Rest in peace.

More like this
Kesha Is Down To Be The Next Bachelorette
By Jake Viswanath
Everything To Know About Taylor Swift’s 10th Studio Album, 'Midnights'
By Grace Wehniainen and Jake Viswanath
Beyoncé’s Special Tribute To Sister Solange Was Both Touching & Hilarious
By Stephanie Topacio Long
How Ghosts Inspired Kesha’s New Music
By Jake Viswanath
Get Even More From Bustle — Sign Up For The Newsletter