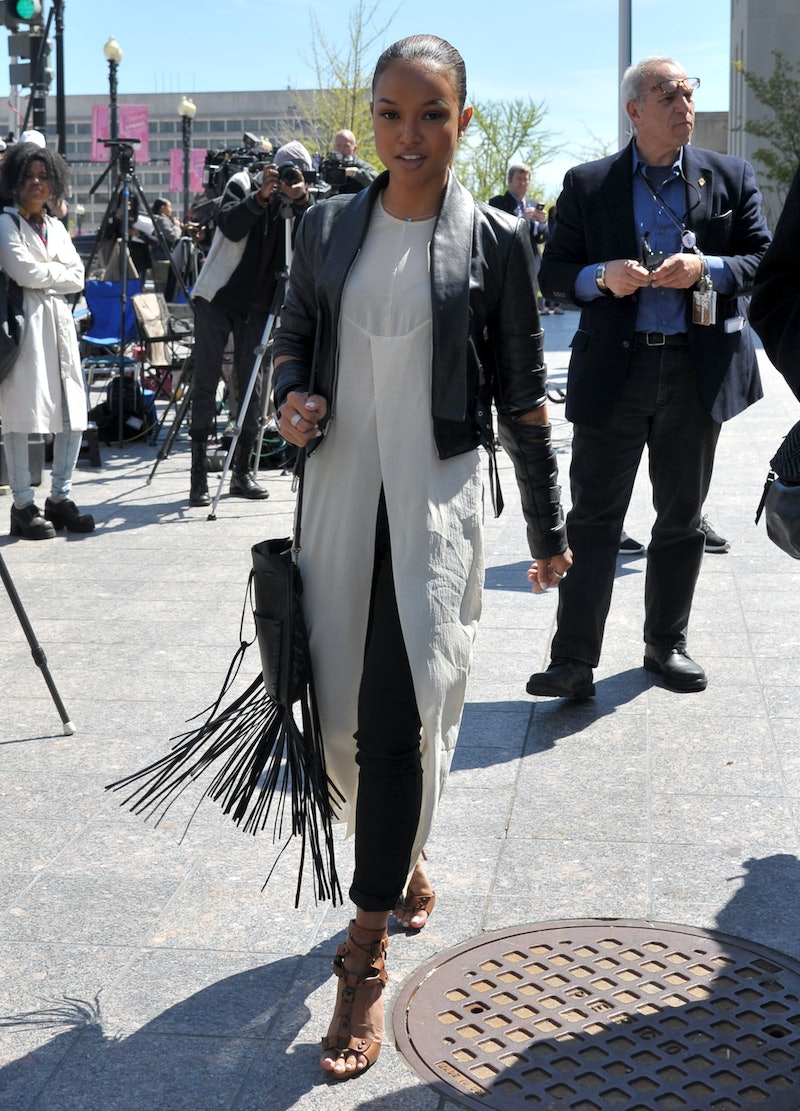 Unless you're living under a rock, you're well aware of the drama between Chris Brown and his sometimes girlfriend, Karrueche Tran. Try as I might to avoid it, Brown and Tran's roller coaster of a love life manages to penetrate all boundaries, and if I'm going to be aware of every aspect of their relationship, I have a few questions I'm going to need answered. Are they together, or are they not? Did she actually cheat with Drake? Is Brown's recently issued apology about the Drake thing legit? Why can I never manage to spell "Karrueche" correctly on the first try? But above all else, I must start with the biggest question of all: Who is Karrueche Tran really?

Through my extensive research, I learned a lot about Tran — mostly that she's known for things other than being Chris Brown's longtime girlfriend. She, in fact, has a career and life of her own, and that surprisingly comes with a fanbase that has nothing to do with her famous romance. Please join me as I take you on a journey of the mind and spirit as we discover exactly who Karrueche Tran is. Spoiler alert: I can find no evidence that she is capable of taking a bad picture, and I am supremely jealous.

Tran is 26 years old and lives in LA, and her Twitter bio states that she's Vietnamese. Her Facebook describes her as a "Philanthropist. Socialite. Model. Stylist," and she does spend a good amount of time helping the less fortunate. Most recently, she brought clothes to Toronto's homeless. Last month, she appeared in her first movie, "Mirror, Mirror," which aired on tvOne.

Also, her Instagram disappeared Sunday night. Fans thought she might've deleted it in response to her gem of an (ex?) boyfriend's social media drama, but Tran states that it was reported as an impersonation.

She's a model & has her own fashion line

There's no denying that Tran is gorgeous, so it's not surprising that she has a modeling career. Currently, she's represented by Paradigm Agency and is a Wilhelmina model — and anyone who's ever binge watched a season of America's Next Top Model all in one day can tell you that's a pretty big deal. Last year, she debuted her own line of clothes for The Kill Society, including crop tops and sweatshirts.

She just shot an episode of Single Ladies

Not sure if her role is reoccurring, but either way, we will see Tran appear on Centric's revival of the cancelled VH1 show soon. More good news for Tran? She's recently been added to the cast of a web series called The Bay.

Kim Kardashian is apparently not a fan

Of course, this info is based off a report, but knowing Kardashian, I wouldn't be surprised if it were true. Allegedly, when Kardashian and Tran were at the same party in October, Tran asked for a photo with Kardashian, Kanye West, and Chris Brown together, and Kardashian quickly said "absolutely not." Unfortunately, when West was asked about it, he agreed, so the picture happened anyway. Zing!

More like this
Who Is Nick Cannon Dating & How Many Kids Does He Have?
By Jordyn Tilchen and Radhika Menon
The 'Love Island' Wedding Mystery That No One Saw Coming
By Darshita Goyal
Kelly Mi Li Teased A Mysterious New Boyfriend In 'Bling Empire' Season 3
By Brad Witter
Kevin Kreider Finally Asked Out Kim Lee On 'Bling Empire'
By Brad Witter
Get Even More From Bustle — Sign Up For The Newsletter