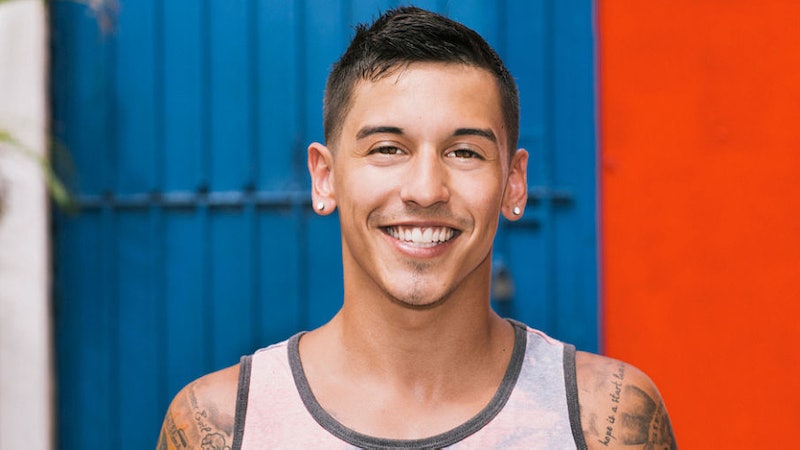 The closer MTV's dating show, Are You The One?, gets to Season 2's finale, the more I'm convinced that this season's group isn't going to win the money. From the time they first met, they've been kind of a mess — and is it just me, or is there way more drama this time around? As much as I love the 11th girl, Christina, I can't help but think that she's the catalyst for all of it. The season got off to a bad start when she and Brandon were revealed not to be a match, and their relationship (which obviously didn't end in the Truth Booth) helped the rest of the group slowly unravel from there. Now that we know that the two aren't a match, it's time to figure out who Nathan's perfect match might be. And as far as I'm concerned? I'm 99 percent sure that Nathan and Ellie are a perfect match.

There are a lot of reasons for this, and most of them come back to the math of it. Statistically speaking, there's been no evidence to prove that Nathan and Ellie aren't a match, and they do seem compatible. Ellie is silly, laid back, and unafraid to speak her mind, while Nathan — a supposed "bad boy" — is looking for someone who wouldn't be put off by his advances. Ellie strikes me as someone strong enough to deal with the crap that Nathan deals out, but wouldn't allow herself to be pressured by him. Nathan needs honesty, and Ellie's certainly capable of it.

And I could be reading way too much into this, but I'm pretty sure Nathan's trying to hint that Ellie's his match on Instagram. Let's examine the evidence:

In the caption on this picture, Nathan says he "doesn't have any luck with blondes." That could definitely qualify hint that his match is a brunette, right? And what do you know — Ellie just so happens to have brown hair.

Later, he posted this pic with Ellie. Of all the people in the house. Guys, I think this is a hint too. And if you read through the comments, you can see that there are a lot of fans who agree with me that they're a match.

And when last week's episode aired, Ellie posted this picture of her and Nathan, despite the fact that in the episode that aired that night, she locked in with Brandon. Suspicious, no?

Again, I could be reading way too much into it, but these clues added up make me think that she and Nathan are definitely going to be a perfect match. Fingers crossed that these guys end up with the money, because at this point, I'm not sure it's going to happen.