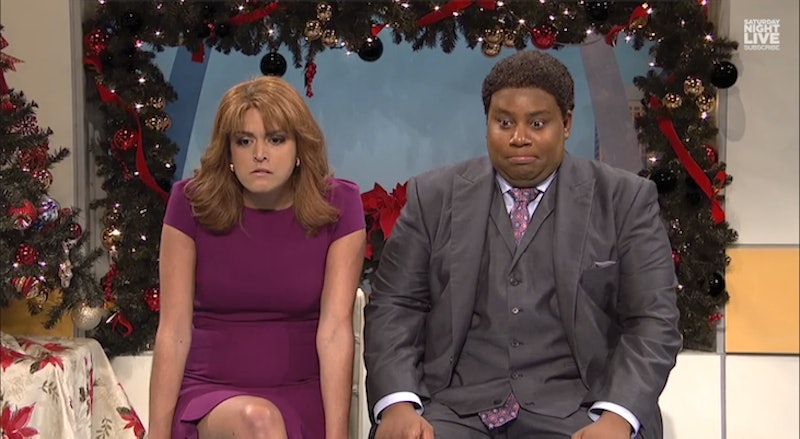 With the presence of James Franco and Nicki Minaj/Beyoncé, Saturday Night Live saw a jump in ratings on Saturday night. With a lot happening in pop culture this past week, Peter Pan Live! and the Sony hacks for example, SNL had a lot to cover in only a short amount of time. When that happens, certain sketches that had been rehearsed throughout the week are scrapped at dress rehearsal to allow for the show to fit the 90 minute time frame. One of those sketches that didn't make it to air this week was SNL 's take on Ferguson, and the riots that have taken place in the town St. Louis metropolitan area.

The sketch, which is captioned on YouTube as "Cut For Time," was not the only Ferguson sketch that was planned for Saturday. The show usually always uses a big news story to open the show, but last Saturday there was a cold open sketch that circled around Al Sharpton's mispronunciation throughout multiple interviews with officials and experts. While it was timely, the real politically charged skit was the cut "Morning News" sketch that made it's way to the Internet after Saturday's show.

In the sketch, which takes place on a morning news show in St. Louis, after a heavy segment covering the protests and riots in Ferguson, the news show cuts to the upbeat "Rise and Smile" show. If the sketch feels uncomfortable, then SNL did something right. The tone of the fictional show, with Kenan Thompson and Cecily Strong as hosts, is usually a cheery and positive segment that whisks viewers to light-hearted content. But it is hard to ignore the chaos that is engulfing Ferguson and the St. Louis area now, which is why the segments' hosts had a tough time keeping the usual optimism throughout the show.

From slips of the tongue like "blackies," instead of the musical group "Black Keys," to James Franco's character, a guest chef, who shares a similar name to Darren Wilson (Franco's character was named Darryl Wilson), the entire segment was cringe worthy for a news show, but hilarious for a SNL skit. Whether the sketch was cut because the show didn't want too many politically charged sketches, or it was the easiest to lose for another reason, it could have been one of the best of the night.

More like this
Britney Spears Shares Unknown Details Of Conservatorship In New Voice Notes
By El Hunt
Paul Mescal, Man Of Mystery
By Samantha Leach and Heather Hazzan
The 'Reasonable Doubt' Cast Includes A 'Save The Last Dance' Reunion
By Grace Wehniainen
Devi Is Going To Meet A “Smoldering Bad Boy” In ‘Never Have I Ever’ Season 4
By Jack Irvin and Gabrielle Bondi
Get Even More From Bustle — Sign Up For The Newsletter